While some may claim that the settlements made with big banks in recent years are better than nothing or are significant amounts, no matter how much that bank borrowed in 2008-2009, to say that these settlements are minuscule at best is an understatement. Last month, Morgan Stanley, one of the largest investment banks in the world and biggest borrowers in the 2008 financial crisis, agreed to pay $3.2 billion in a settlement with federal authorities.

Although $3.2 billion may seem like a lot of money, and it absolutely is for people not in the investment banking business, let’s compare this settlement to other settlements reached in relation to the crisis. JPMorgan reached a $13 billion settlement, Citigroup reached a $7 billion agreement, and Bank of America agreed to a “historic” settlement of $16.6 billion. Compared to these hefty settlements, $3.2 billion really doesn’t seem like much, especially considering Morgan Stanley borrowed more than almost any other bank during the crisis.

What role did the banks play in the collapse of the housing market and the financial crisis that ensued? They lied and were extremely irresponsible with the mortgage packages they were selling. They would give the loan a high rating of security when it actually had risky factors inside of it and handed them out like candy to people who weren’t likely to be able to pay them back. This is just the tip of the iceberg of the illegal and irresponsible practices Morgan Stanley was involved in, among many other banks, but these practices essentially caused the biggest financial crisis in America since the Great Depression. Why did the banks allow this to happen? Oscar-winning film The Big Short, which details the discovery of the impending economic collapse, suggests that the big banks knew that the government would have to bail them out to protect the country from an even bigger collapse. And bail them out, they did.

In 2008, the Troubled Asset Relief Program (TARP) was founded as a group that would allocate funds to bail out the banks that were failing and essential to the economy. Rather than nationalize the banks in an effort to protect taxpayers, whose money was essentially buying out the banks, the corrupt Federal Reserve gave money to the banks so they could stay afloat and remain independent. The banks wound up receiving about $700 billion as reported by TARP, but this was only a fraction of how much the Federal Reserve spent, lent, or guaranteed, which was estimated to be $7.7 trillion. How big does the $3.2 settlement look now? 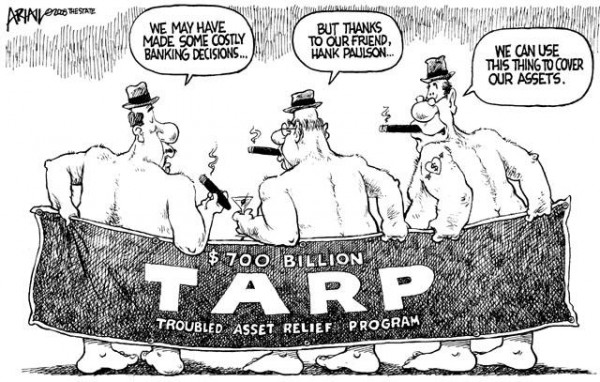 Morgan Stanley was reportedly given $107 billion in the bailout, more than most banks received. This means that the $3.2 billion they settled on is only 2% of what they borrowed from taxpayers during a financial collapse that they caused. The amount is so minuscule that Morgan Stanley had already saved this amount for the settlement, and this is reportedly half of the profits they had just last year.

These criminals should be forced to pay back what they borrowed, plus interest. It’s the American people who suffered the blows of this financial wrongdoing, with many losing their homes and jobs. To make matters worse, there is a lot of speculation about misallocation of these funds once they were transferred to the banks. Andrew Cuomo, Governor of New York and then-president of the Federal Reserve Bank of New York, said that Citigroup “paid hundreds of millions of dollars in bonuses to more than 1,038 of its employees after it had received its $45 billion TARP funds in late 2008.” This corporation and many others have not yet faced charges for their role in the collapse or this gross misuse of taxpayer bailout money.

Though $3.2 billion may seem like a significant amount for Morgan Stanley to pay as a settlement for the biggest modern financial collapse in America, it is such a small figure compared to what Morgan Stanley borrowed and what the monetary and person repercussions were for the American people. Yes, it’s better than nothing, but it certainly shows that the U.S. has not changed much when it comes to catering to these big institutions that hold so much of the country in the palm of their hands.

The graphic body camera footage showing an Arizona cop murder an innocent unarmed dad has just been released—following the killer cop’s acquittal. Phoenix, AZ —  (TFTP) In March of 2016, Mesa Police Officer Philip Brailsford was charged with second-degree murder for gunning down Daniel Shaver, an innocent husband, and father of two. The shooting was Read More…

How The Establishment Propaganda Machine Gaslights Us Into Submission

The dynamics of the establishment Syria narrative are hilarious if you take a step back and think about them. I mean, the western empire is now openly admitting to having funded actual, literal terrorist groups in that country, and yet they’re still cranking out propaganda pieces about what is happening there and sincerely expecting us Read More…