In a speech delivered this Tuesday, at the Washington Press Club, US Secretary of State Mike Pompeo claimed that the new “home base” of Al-Qaeda is Iran. He did so without any evidence to support his claim. Why has this been taken so seriously?

The claim that Iran is somehow hosting, aiding and abetting al-Qaeda, is one that even Iran’s most hardline opposition in the Middle East have never bothered to level against it. Even the Israelis have abstained from using this line in order to justify their aggression against the Islamic Republic. The reason why such claims are not made by the likes of Israeli PM, Benjamin Netanyahu, is because the Israeli population are knowledgeable enough about the region to understand that this isn’t the case.

Western populations are largely kept in the dark about the facts regarding Middle-Eastern and Muslim issues, and claims like this one are heavily dependent upon such engineered ignorance in order to have an impact. This is why statements like this, made by the likes of Mike Pompeo, carry weight when spread throughout the Western press. In a way, it is somewhat insulting that a State official would assume such a low level of knowledge of their national constituents, but after all, this is the same government that lied the American people into the war in Iraq.

The most shocking part of this claim leveled at Iran, is that this is the exact same claim that was originally made in the lead up to the war on Iraq. At the time, the claim made against Saddam Hussein also had no evidence to back it up and despite many Americans believing it, the allegation had no legs and eventually the Bush administration moved onto its bigger lies, such as the infamous line that the Iraqi dictator possessed “weapons of mass destruction”.

As a possible strategy to demonize Iran, in order to perhaps make incoming President Joe Biden’s job tougher, when it comes to re-entering the Iran Nuclear deal, it is a damning insult to the American public’s perceived intellect by the Trump administration.

Why This Claim Makes No Sense

The first crucial point to note here, is that Al-Qaeda is a militant Sunni terrorist organisation and Iran is a Shia Muslim country. Now some may argue here that despite the two being different types of Muslims, they are still Muslims, in fact some may even cite examples of Iran working with Sunni groups such as Hamas in the Gaza Strip, as proof that Iran will work with Sunnis.

However the example given here with Hamas, which is also a registered terrorist organisation by the United States, is a fundamentally flawed analogy. Firstly, when it comes to Al-Qaeda, it is also a Sunni group yes, but does not in any way replicate the function or form of Hamas. Hamas is a Palestinian national liberationist group, which operates as the democratically elected government inside of the Gaza Strip, it operates charities and began as a charitable organisation rooted in what was known as the Mujamma Islamiyya. Hamas only evolved into an armed resistance group in the 1990’s as a reaction to the political climate and with one primary aim, liberating Palestinian land from Israel. Hamas is open to negotiating with and forming partnerships with secular, Shia, Christian or any other government. Hamas also works alongside other groups in Gaza, such as the Socialist-Communist Secular Party known as the PFLP or the Popular Front for the Liberation of Palestine.

Hamas has one sole enemy, Israel, therefore it would be counterproductive to focus on targeting anyone that is not either directly aiding that enemy or the enemy itself. The Islamic Resistance Movement does carry with it an ideology under which it would ideally like to establish an Islamic State, however the movement is a Palestinian Nationalist movement and wishes only to create a Palestinian State between the Jordan River and Mediterranean Sea. Even when it comes to the group’s goal of creating an Islamic State, it hopes to achieve this only through a democratic process, in which it would compete against other Palestinian Parties across the political spectrum and has already engaged in that process.

Al-Qaeda on the other hand will not work with Shias, Communists, Christians, Socialists, Secularists or even other Sunni groups who do not share their exact same hardline Salafist beliefs. Al-Qaeda has many splinter groups as a result of this, splinter groups that have even infiltrated the Gaza Strip, carried out attacks against Hamas and have been fought and defeated by the Gaza-based group. One of the main splinter groups of Al-Qaeda, which Iran is currently aiding the Syrians and Russians to exterminate, is Hayat Tahrir Al-Sham (HTS), which changed its name from Jabhat Al-Nusra, largely understood to be the Syrian wing of Al-Qaeda. 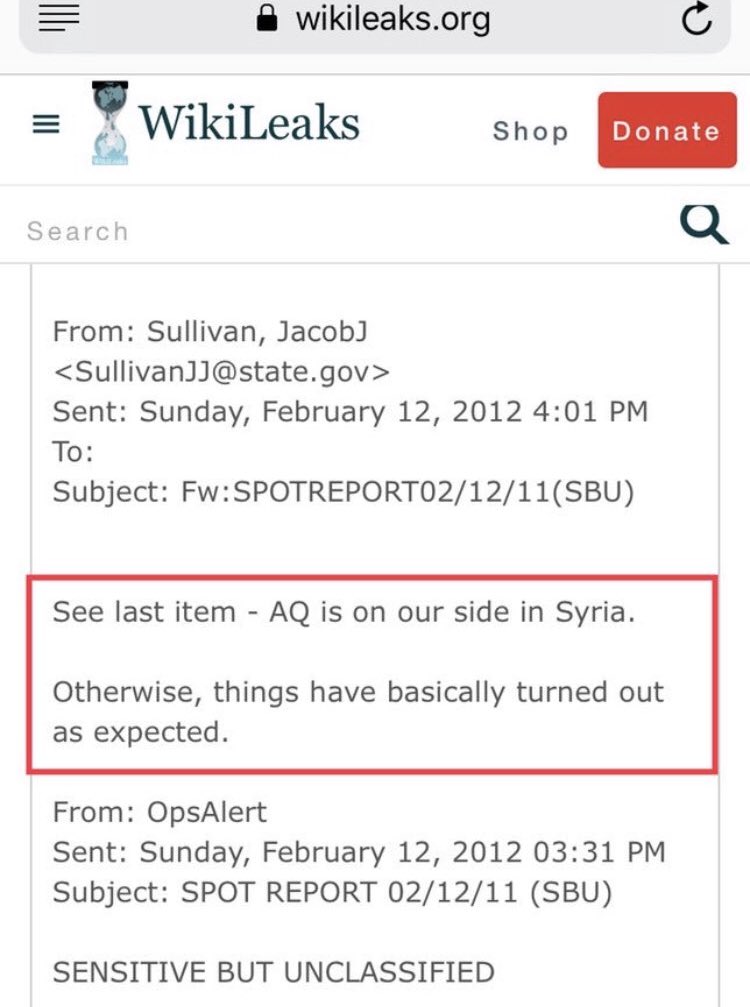 Al-Qaeda carries with it a strictly anti-Shia ideology; not only do Al-Qaeda not see Shia’s as Muslims, but believe that specifically Iran are perhaps the biggest enemy of the Muslim Ummah (family). If you were to watch or read the Iranian Press you would see that Al-Qaeda, IS and other affiliated groups are referred to as “Takfiris” essentially meaning those who accuse others of being non-Muslim and hence kill based upon this belief, which is considered a sin for Muslims (evidently outside of the small al-Qaeda circles).

For instance, I as a Sunni Muslim, regardless of which school of thought I fall under, would still be free to worship as I see fit inside of Iran, whereas if I was to live under Al-Qaeda rule I would likely be executed for how I practice my religion. Also inside of the Gaza Strip, ruled by Hamas, Christians for instance are free to practice their religion, something which would never occur under Al-Qaeda rule.

This is a point that is often glossed over, however, it is important, as you will never hear any of this explained in the mainstream Western press. This is despite the corporate media having broadcasted stories about Muslims almost non-stop since 9/11. Unfortunately, because the media is in the business of ‘manufacturing consent’ and not educating the people, most Westerners wouldn’t even understand that there is a difference between an Afghan, Pakistani, Persian (Iranian) and Arab, which all speak different languages and maintain completely different cultural identities.

On top of all of this, it is also important that those reading this understand that the mutual hatred of each other, shared between Iran and Al-Qaeda, manifests itself in much more than ideological differences. Iran has and still does help to obliterate Al-Qaeda on the battlefield, providing key logistical, military equipment and on-the-ground aid to both the Syrian and Iraqi government forces, as well as to groups such as Hezbollah (In Lebanon), Ansarallah (In Yemen) etc., in order to achieve this objective. The number one enemy of both Al-Qaeda and Daesh (IS) in the Middle East is widely accepted to be Iran.

For those familiar with the history of how Al-Qaeda was formed, you may know by now that the infamous Osama Bin Laden, along with his “Mujahideen” colleagues, formed Al-Qaeda whilst working alongside the CIA, and other Western intelligence agencies, during the Soviet-Afghan war. Osama Bin Laden had a strong relationship with US intelligence, with his own family members having later taken up friendships with prominent families in the United States, such as the Bush family.

Even in the case of Abu Musab Al-Zarqawi, the deceased ex-leader of Al-Qaeda inside of Iraq, his agenda worked in the US’s favor overall, turning the anti-US insurgency in Iraq into a Sunni-Shia civil war. This is in a country that, prior to the US invasion and the deposing of Iraqi Dictator Saddam Hussein, had little to no issues with Sunni-Shia sectarianism.

Zarqawi was perhaps one of the largest ideological influencers of Daesh, which quickly spread through Iraq and Syria like a plague, armed with US weaponry and vehicles.

The birthplace of the ideology behind Al-Qaeda and also much of its financing, had been in Saudi Arabia, a key US ally inside of the Middle East. Throughout the years of the Syrian War, the US has also openly backed Al-Qaeda splinter groups, and indirectly its aid has consistently throughout the years found its way into the hands of both Al-Qaeda and Daesh.

Wherever there is a regime change war occurring, Al-Qaeda is consistently on the side of the United States, in that it pops up to help reach US goals. Whether that be justifying the US’s presence in foreign countries, or the overthrow of secular governments such as in the case of Syria.

To outline the entire record of the US and Saudi backing, whether that be with training, arming, transportation, essential supplies or even air support, would require numerous articles, however, it is clear that the US has been aligned with the group from the very start.

What should also be considered when talking about the US relationship with Al-Qaeda is the fact that last January the United States assassinated Iran’s top general, Qassem Soleimani, of the IRGC’s Quds Forces, who was well known for his role in fighting Al-Qaeda and Daesh. Soleimani was widely praised for having been on the front lines of the fight against Al-Qaeda and Daesh, leading native regional forces – alongside Iranian forces – to victory over the terrorist groups and purging them from the region.

It goes without saying that the Iraqi, Syrian and Iranian governments have all come out and essentially equated Pompeo’s claims to baseless conspiracy theories. But it is important to note that for people living in the Middle East, it is almost common knowledge that Al-Qaeda and Daesh are the creations of the United States. Popular Syrian and Palestinian television shows will even feature satirical scenes of US troops and these terrorist forces as openly being friends.

To conclude, the usage of such an unbelievable claim, likely to help Israel in its ongoing lobbying of the incoming Biden Administration to keep out of the JCPOA (Iran Nuclear Deal), is at best an incredible insult to the intelligence of the US public.

Top 6 Conspiracies That Turned Out To Be True

It is a stark and lonely path for that of the modern-day truth seeker. One that quickly earns them the label of “Conspiracy Theorist” simply for seeking truth in this world of misinformation, regardless of the factual information presented or the common sensical attempt to inform their fellow Americans. This label is a preplanned attack Read More…

Morocco-Israel Normalization Is A War Deal, Not A Peace Deal

Welcome to Foreign Policy with Robert Inlakesh. In this show Robert dives into some of the most important foreign policy discussions of today while highlighting the most important information – primarily that which is missed, excluded or misrepresented by the MSM. Video Source Links: https://merip.org/2003/08/behind-the-baker-plan-for-western-sahara/ https://www.un.org/en/ga/search/view_doc.asp?symbol=A/RES/66%28I%29&Lang=E&Area=RESOLUTION https://uk.reuters.com/article/us-morocco-westernsahara/polisario-leader-says-western-sahara-ceasefire-with-morocco-is-over-idUSKBN27U0GE  https://english.aawsat.com/home/article/2607331/uae-opens-consulate-morocco%E2%80%99s-laayoune https://www.moroccoworldnews.com/2020/11/326602/uaes-unwavering-support-for-morocco-on-western-sahara-angers-algeria/ https://www.aljazeera.com/news/2018/5/1/morocco-cuts-diplomatic-ties-with-iran-over-western-sahara-feud https://www.nytimes.com/1986/07/23/world/peres-and-hassan-in-talks-syria-breaks-moroccan-ties.html https://www.amnesty.org/en/latest/news/2020/11/human-rights-monitoring-needed-more-than-ever-in-western-sahara/ https://qudsn.net/post/181006?fbclid=IwAR1xWvw1v4HrTRLnRD6WTkKGaDU9hICGhdEFnKR18KeangmcAKr154buUuc Bitcoin Donations Read More…

New Patent Reveals Facebook Can Secretly Watch You With Your Camera, Here’s How to Stop It

A newly discovered patent ( Patent #: US20150242679 ), filed on behalf of the social media monolith, Facebook, is disturbing, to say the least — and, grounds for the immediate covering of your webcam or smartphone camera. The patent, titled, Techniques for Emotion Detection and Content Delivery, explains how the device’s camera will be used to view the user’s Read More…

One Reply to “If Anything The United States Is The “Home Base” Of Al-Qaeda, Not Iran”