The ransomware has been identified as WannaCry

Update 4: According to experts tracking and analyzing the worm and its spread, this could be one of the worst-ever recorded attacks of its kind. The security researcher who tweets and blogs as MalwareTech told The Intercept “I’ve never seen anything like this with ransomware,” and “the last worm of this degree I can remember is Conficker.” Conficker was a notorious Windows worm first spotted in 2008; it went on to infect over nine million computers in nearly 200 countries. As The Intercept details,

Today’s WannaCry attack appears to use an NSA exploit codenamed ETERNALBLUE, a software weapon that would have allowed the spy agency’s hackers to break into any of millions of Windows computers by exploiting a flaw in how certain version of Windows implemented a network protocol commonly used to share files and to print. Even though Microsoft fixed the ETERNALBLUE vulnerability in a March software update, the safety provided there relied on computer users keeping their systems current with the most recent updates. Clearly, as has always been the case, many people (including in governments) are not installing updates. Before, there would have been some solace in knowing that only enemies of the NSA would have to fear having ETERNALBLUE used against them–but from the moment the agency lost control of its own exploit last summer, there’s been no such assurance.

As security researcher Matthew Hickey, who tracked the leaked NSA tools last month, put it, “I am actually surprised that a weaponized malware of this nature didn’t spread sooner.”

Update 3: Microsoft  has issued a statement, confirming the status the vulnerability:

In March, we provided a security update which provides additional protections against this potential attack.

Those who are running our free antivirus software and have Windows updates enabled, are protected. We are working with customers to provide additional assistance.

Update 2: Security firm Kaspersky Lab has recorded more than 45,000 attacks in 74 countries in the past 10 hours. Seventy-four countries around the globe have been affected, with the number of victims still growing, according to Kaspersky Lab. According to Avast, over 57,000 attacks have been detected worldwide, the company said, adding that it “quickly escalated into a massive spreading.”

According to Avast, the ransomware has also targeted Russia, Ukraine and Taiwan. The virus is apparently the upgraded version of the ransomware that first appeared in February. Believed to be affecting only Windows operated computers, it changes the affected file extension names to “.WNCRY.” It then drops ransom notes to a user in a text file, demanding $300 worth of bitcoins to be paid to unlock the infected files within a certain period of time.

While the victim’s wallpaper is being changed, affected users also see a countdown timer to remind them of the limited time they have to pay the ransom. If they fail to pay, their data will be deleted, cybercriminals warn. According to the New York Times, citing security experts, the ransomware exploits a “vulnerability that was discovered and developed by the National Security Agency (NSA).” The hacking tool was leaked by a group calling itself the Shadow Brokers, the report said, adding, that it has been distributing the stolen NSA hacking tools online since last year.

Predictably, Edward Snowden – who has been warning about just such an eventuality – chimed in on Twitter, saying “Whoa: @NSAGov decision to build attack tools targeting US software now threatens the lives of hospital patients.”

Update 1: In a shocking revelation, The FT reports that hackers responsible for the wave of cyber attacks that struck organisations across the globe used tools stolen from the US National Security Agency.

A hacking tool known as “eternal blue”, developed by US spies has been weaponised by the hackers to super-charge an existing form of ransomware known as WannaCry, three senior cyber security analysts said. Their reading of events was confirmed by western security officials who are still scrambling to contain the spread of the attack. The NSA’s eternal blue exploit allows the malware to spread through file-sharing protocols set up across organizations, many of which span the globe.

As Sam Coates summed up…

Hospitals across the UK have been hit by what appears to be a major, nationwide cyber-attack, resulting in the loss of phone lines and computers, with many hospitals going “dark” and some diverting all but emergency patients elsewhere. At some hospitals patients are being told not to come to A&E with all non-urgent operations cancelled, the BBC reports.

The UK National Health Service said: “We’re aware that a number of trusts that have reported potential issues to the CareCERT team. We believe it to be ransomware.” It added that trusts and hospitals in London, Blackburn, Nottingham, Cumbria and Hertfordshire have been affected and are reporting IT failures, in some cases meaning there is no way of operating phones or computers.

At Lister Hospital in Stevenage, the telephone and computer system has been fully disabled in an attempt to fend off the attack.

NHS England says it is aware of the issue and is looking into it.

UK Prime Minister Theresa May confirms today’s massive cyber hit on NHS is part of wider international attack and there is no evidence patient data has been compromised.

Hospitals say backlog will go on for some weeks after today’s cyber attack #NHScyberattack pic.twitter.com/BGV5jV7KZ1

The situation has got significantly worse as The BBC reports the ransomware attack has gone global.

Screenshots of a well known program that locks computers and demands a payment in Bitcoin have been shared online by parties claiming to be affected. 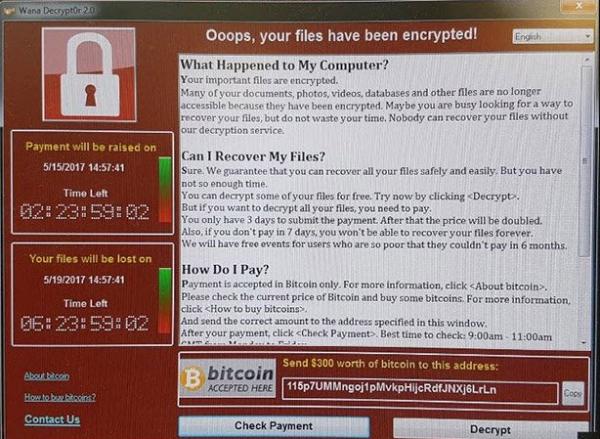 It is not yet clear whether the attacks are all connected. One cyber-security researcher tweeted that he had detected 36,000 instances of the ransomware, called WannaCry and variants of that name.

There have been reports of infections in the UK, US, China, Russia, Spain, Italy, Vietnam, Taiwan and others.

The BBC details a number of Spanish firms were among the apparent victims elsewhere in Europe.

Telecoms giant Telefonica said in a statement that it was aware of a “cybersecurity incident” but that clients and services had not been affected.
Power firm Iberdrola and utility provider Gas Natural were also reported to have suffered from the outbreak.

There were reports that staff at the firms were told to turn off their computers.

In Italy, one user shared images appearing to show a university computer lab with machines locked by the same program. 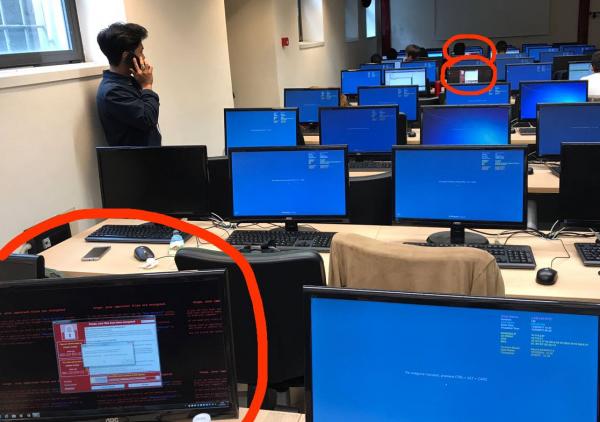 Bitcoin wallets seemingly associated with the ransomware were reported to have already started filling up with cash.

“This is a major cyber attack, impacting organizations across Europe at a scale I’ve never seen before,” said security architect Kevin Beaumont.

According to security firm Check Point, the version of the ransomware that appeared today is a new variant.

Several experts monitoring the situation have linked the attacks to vulnerabilities released by a group known as The Shadow Brokers, which recently claimed to have dumped hacking tools stolen from the NSA.

Is There Reason for Optimism in 2022?

As the COVID-19 panic approaches 2 years, with the return of lockdowns and mandatory vaccinations on the horizon, are there legitimate reasons for optimism in 2022? There’s a certain nostalgia which overtakes humanity come the end of one year and the beginning of another. We find ourselves faced with another set of 12 months with Read More…

Welcome to The Daily Wrap Up, a concise show dedicated to bringing you the most relevant independent news, as we see it, from the last 24 hours (6/15/21). As always, take the information discussed in the video below and research it for yourself, and come to your own conclusions. Anyone telling you what the truth Read More…