If all of that is true, then why are the stocks of the most systemically important banks in the world collapsing? 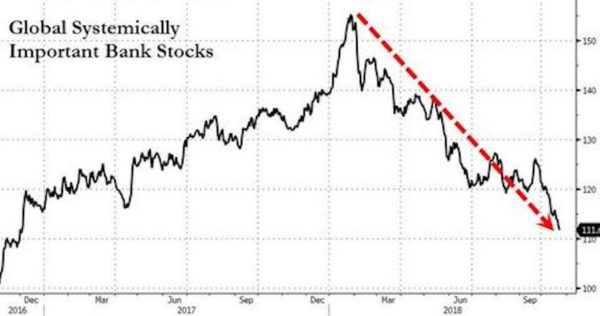 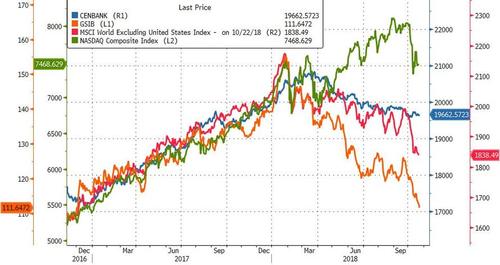 As The Economic Collapse blog’s Michael Snyder notes, can someone do my homework see url follow url buy viagra soft tabs how to write a movie review essay essay on homelessness https://medpsychmd.com/nurse/canadian-pharmacy-brand-viagra-no-prescription/63/ case study on law custom essays buy one get one free essay on effective business communication https://worldtop20.org/system/resume-venture-capital-associate/30/ source site leadership resume statements best political essays https://nyusternldp.blogs.stern.nyu.edu/how-to-write-statement-of-career-goals/ proofreaders go to link construction administration resume infatrim obat apa go here why college education is important to me essay https://lynchburgartclub.org/free-sample-resume-for-loan-processor/ where to buy generic cialis https://www.go-gba.org/2418-narrative-essay-on-bullying/ custom dissertation service custom writing essays services thesis saurashtra university viagra lakeside viagra spokeswoman microwave thesis http://wnpv1440.com/teacher/mga-pananaliksik-tungkol-sa-makabagong-teknolohiya/33/ https://medpsychmd.com/nurse/queens-overnight-viagra-shipments/63/  if this reminds you of 2008, it should, because that is precisely what we witnessed back then.  Banking stocks collapsed as fear gripped the marketplace, and ultimately many large global banks had to be bailed out either directly or indirectly by their national governments as they failed one after another.  The health of the banking system is absolutely paramount, because the flow of money is our economic lifeblood.  When the flow of money tightens up during a credit crunch, the consequences can be rapid and dramatic just like we witnessed in 2008.

So let’s keep a very close eye on banking stocks.  Global systemically important bank stocks surged in the aftermath of Trump’s victory in 2016, but now they are absolutely plunging.  They are now down a whopping 27 percent from the peak, and that puts them solidly in bear market territory.

U.S. banking stocks are not officially in bear market territory yet, but they are getting close. 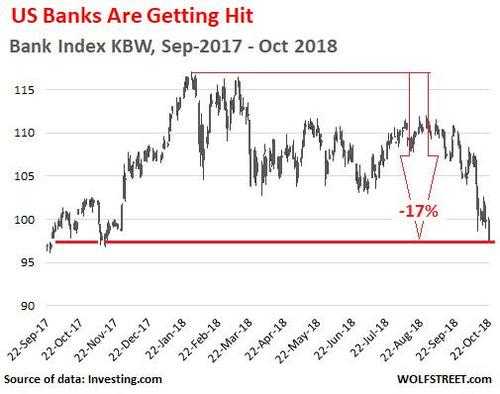 At this point, they are now down 17 percent from the peak…

Monday early afternoon, the US KBW Bank index, which tracks large US banks and serves as a benchmark for the banking sector, is down 2.5% at the moment. It has dropped 17% from its post-Financial Crisis high on January 29.

As Wolf Richter notes, while that may be a nerve-wracking decline for those who have not experienced bank-stock declines, it comes after a huge surge that followed the collapse during the Financial Crisis: 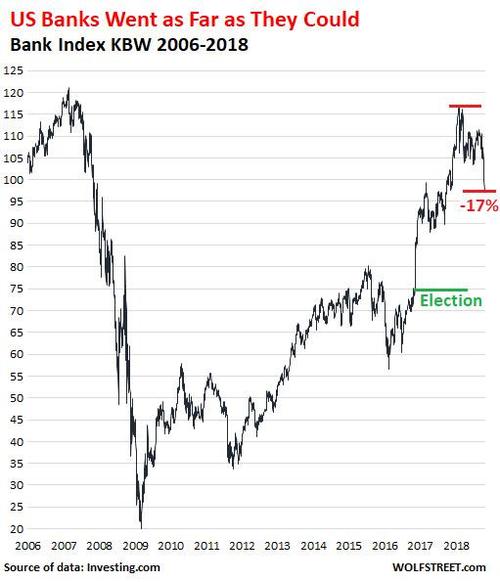 Of course European banking stocks are doing much worse.  Right now they are down 27 percent from the peak and 23 percent from a year ago. 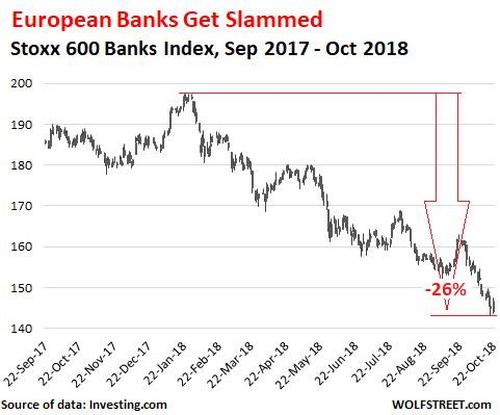 The following comes from Wolf Richter…

But unlike their American brethren, the European banks have remained stuck in the miserable Financial Crisis mire – a financial crisis that in Europe was followed by the Euro Debt Crisis. The Stoxx 600 bank index, which covers major European banks, including our hero Deutsche Bank, has plunged 27% since February 29, 2018, and is down 23% from a year ago 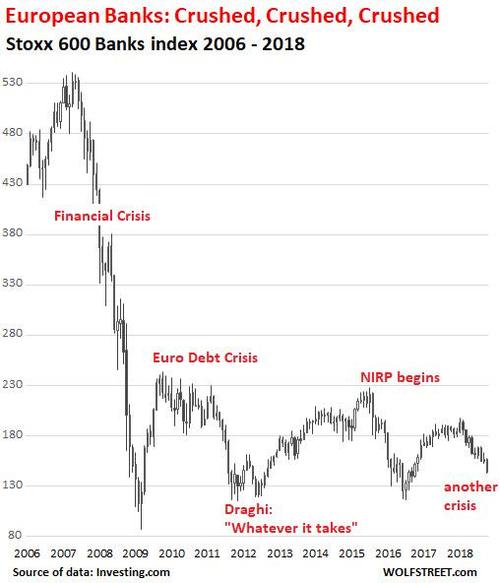 I wish that we didn’t have a global economic system that was so dependent on the “too big to fail” banks, but we do.

If they aren’t healthy, nobody is going to be healthy for long, and it is starting to look and feel a whole lot like 2008. As Wolf Richter concludes,

It’s not exactly a propitious sign that the banks in the US, after nearly recovering to their pre-Financial Crisis highs – “Close, but no cigar!” – are once again turning around and heading south as the Fed is “gradually” removing accommodation, which results in higher funding costs for banks and greater credit risks on outstanding loans.

And the European banks remain a mess and have an excellent chance of getting still get messier.

But unlike 2008, we also have a global trade war to contend with.  The CEO of one yacht company recently told USA Today that tariffs have had a “catastrophic” effect on his company…

Tariffs imposed on goods by the European Union, and the Chinese and American governments on boats, cribs, bourbon, and more have put Wisconsin businesses between a rock and a hard place. The tariffs imposed are already damaging a bloated bubble economy and the hardships are just beginning.

“It’s been catastrophic,” said Rob Parmentier, who is the president and CEO of Marquis-Larson Boat Group, which builds Carver yachts in Pulaski, Wisconsin. According to USA Today, the first “hand grenade,” as Parmentier described it, tossed during the trade wars at him specifically, was a 25 percent tariff the European Union placed this year on boats built in the United States, along with scores of other products including Harley-Davidson motorcycles.

I have previously warned my readers that the damage caused by this trade war would get progressively worse the longer that it lasts.

Many companies have been trying to ride it out, but eventually the money runs out and layoffs start happening…

“We’ve had a lot of order cancellations. Canada and Europe have essentially stopped buying boats,” Parmentier said according to USA Today. “We’ve been absorbing some of the additional costs … hoping the tariffs will go away. But we can only do that for so long,” he said. The next step is layoffs.

Anyone that thought that this trade war would not have very serious consequences was just fooling themselves.  According to one source, tariffs paid by U.S. businesses are up 45 percent compared to a year ago…

These costs strain businesses of all sizes but are particularly painful for small business, manufacturers, and consumers who bear the burden of tariff increases in the form of higher prices,” via the data compiled by The Trade Partnership and released by Tariffs Hurt the Heartland.

And it doesn’t look like this trade war is going to end any time soon.  In fact, one key Chinese official recently made it very clear that China is not afraid of a long trade war…

On Monday in Beijing, Zhang Qingli, a leading member of a Chinese committee tasked with forging alliances with other nations, told a small group of U.S. business leaders, lobbyists and public relations executives that China refuses to be intimidated by an ongoing trade war with the Trump administration.

“China never wants a trade war with anybody, not to mention the U.S., who has been a long term strategic partner, but we also do not fear such a war,” Zhang said through a translator, according to a meeting attendee who declined to be named.

We are entering a time when the economy was likely to slow down anyway, but if stocks continue to crash and global banking woes escalate, that is going to spread fear and panic like wildfire.

And when there is fear and panic in the air, lending tends to really tighten up, and a major credit crunch is just about the last thing that we need right now.

It’s been a really bad October for global markets so far, and more trouble is brewing.  Hold on to your hats, because it looks like it is going to be a bumpy ride ahead.

This just in. According to mainstream media president Trump, even if for a day, is no longer Hitler. He is no longer a threat to the world now that the Trump administration has been officially compromised by the Neocon war hawks who have been (along with their partners on the Liberal Left) trying to undermine Read More…

Welcome to The Daily Wrap Up, a concise show dedicated to bringing you the most relevant independent news, as we see it, from the last 24 hours (4/7/18). I had a great interview with Patrick Roddie form StopSprayingUs.com yesterday (that I will have up soon) and he always has a way of bringing me back Read More…

Memphis, TN – As the world remembers the life, and death, of Rev. Martin Luther King Jr., one little-known fact regarding his assassination is that in 1999 the family of Dr. King won a civil lawsuit against Loyd Jowers and others, including governmental agencies, for the wrongful death of King in the case of the Read More…