Phoenix, AZ —  (TFTP) In March of 2016, Mesa Police Officer Philip Brailsford was charged with second-degree murder for gunning down Daniel Shaver, an innocent husband, and father of two. The shooting was captured on body cam footage, part of which was released the following May. On Thursday, a jury, apparently blinded by the badge delivered a verdict of not guilty and the rest of the body camera footage was released—showing a cold-blooded murder.

In October, Brailsford’s defense claimed that the prosecution showing the jury the body cam during opening statements would be unfair to the killer cop. Apparently, this strategy worked.

Jurors deliberated less than six hours and despite the horrifying body camera showing Brailsford execute Shaver, they somehow returned a not guilty verdict. This is a travesty of justice and a testament to the system that protects killers who wear badges.

Last year, an Arizona judge announced that they would be releasing the body camera footage showing Brailsford murder Shaver. When they did release it, however, the city released two videos, both of which were clearly edited and portions redacted.

Now that he’s been acquitted, the full body camera was released showing Shaver being entirely compliant with police. Shaver was on his knees, crying and begging police not to shoot him when the coward opened fire on him, firing five times—killing him instantly.

Police said Shaver, a 26-year-old from Texas staying at the La Quinta Inn & Suites on a business trip on Jan. 18, 2016, had invited a couple he met to his room for drinks. No one was in any danger and the entire incident was a misunderstanding. For the majority of the video, police appear to be in a standoff with people who simply can’t hear them.

“Occupants of room 5-0-2, this is the Mesa Police,” the officer is heard yelling on the video, to which he receives no response.

“Listen to my instructions or it’s going to become very uncomfortable for you,” the officer said. “The female is to step outside the room.”

When ‘the female’ does step out the room, she is escorted away by an officer as she tells him how scared she is.

That’s when cops begin barking confusing orders at Shaver who is doing everything he can to comply. Police tell Shaver to keep his legs crossed and crawl forward, a near impossible feat. As he begins to cry from the stress and the ridiculous orders, Shaver becomes distraught and begs for his life. As he tries to crawl forward with his legs crossed, his pants appear to slip down so he moves a hand, at which point Brailsford executes him.

For several minutes, Daniel Shaver was face down with his hands on his head, all these officers had to do was to walk toward him and place him in handcuffs. Clearly, this did not happen and an innocent unarmed dad was taken from his wife and children at the hands of police.

During the trial, Deputy County Attorney Susie Charbel portrayed Brailsford as a “killer” who claimed he feared for his life to cover up an unjustified shooting.

In her closing arguments, Charbel told the jury that an intoxicated Shaver looked “pathetic” before he was killed and didn’t get a chance to know who shot him, according to AZ Central.

“(Brailsford) doesn’t get a pass because he was wearing a police uniform that night,” Charbel said.

“The last thing in the world that Mitch Brailsford wanted to do that night was shoot. His goal wasn’t to kill Daniel Shaver,” Brailsford’s lawyer, Michael Piccarreta told the jury. “Shaver is not a bad person, but his actions are what brought the police that night.”

However, if we look at Brailsford’s custom AR-15, it was clear the first thing he wanted to do was shoot. 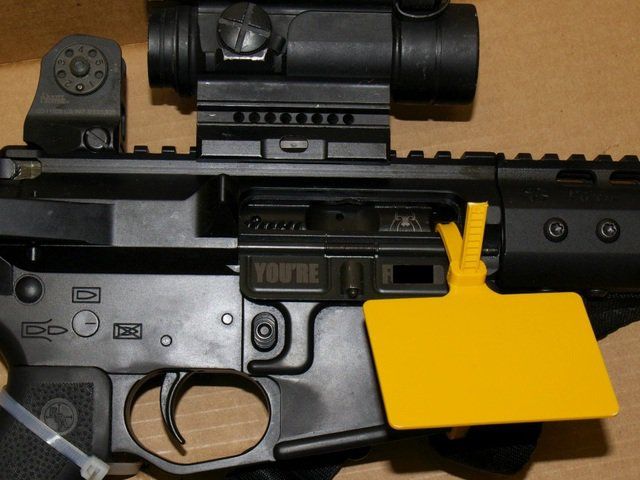 Conveniently, however, the judge did not allow the jury to see the above photo because he felt it was prejudicial. Had jurors actually been shown the real image of this sadistic killer cop, they would’ve likely been more inclined to see the reality of the execution.

Also, it was not Shaver’s actions that brought police that night. He had committed no crime.

On January 18, Brailsford, along with several other officers, responded to a call about a suspect with a rifle in a hotel room. The ‘rifle’ was nothing more than a pellet gun that was used in Shaver’s business of pest control, and Shaver was not in possession of the pellet gun when he was murdered in cold blood by officer Brailsford.

Brailsford was fired from the department in March of 2016 for multiple policy violations not associated with the murder of Shaver. After he was fired, we learned that he should have never had a badge that night he killed an innocent man.

Aside from his unsatisfactory performance, records released by Mesa Police revealed that Brailsford was accused of beating three people a few months before he killed Shaver.

Two children and a wife will now live the rest of their lives without their loving father because of the actions of this public servant. The one thing that could help get this family closure was to see the man who stole the life of their dad and husband put behind bars. However, because of a broken system, this will not happen.

Watch the video of this execution below, do you think this was an excusable accident in which no one should be held accountable?

Has VICE Become One Of The New Choices For State Propaganda?

Anyone who has studied the rise of the counter-culture in the 1960’s and beyond, will soon realize that most of it was not the result of some spontaneous revolution amongst a politically frustrated youth, but instead was a grand intelligence operation designed to control the growing frustrations amongst society. While there was definitely mounting pressure Read More…

Ontario has just set a startling precedent with the passage of a new law that could lead to the government seizing children from parents who oppose the “Gender Identity” agenda. Bill 89, the 2017 Children, Youth and Family Services Act, passed by a vote of 63-23 on June 1. The new law will have jurisdiction Read More…