Apparently Trump’s efforts to call out reporters for their biased, misleading, inaccurate and/or often just outright false reporting (A.K.A. “Fake News”) is now tantamount to endorsing human rights abuses by dictators the world over…at least according to Politico. Per an article published earlier this morning, Politico argues that “by aligning themselves with Trump’s words, despots have been able to use the U.S. president as a shield for their attacks on press freedom and human rights.”

Authoritarian rulers across the globe are adopting President Donald Trump’s favorite phrase to limit free speech, with prominent leaders or state media in at least 15 countries using his “fake news” line to denounce their critics, according to a POLITICO review.

By aligning themselves with Trump’s words, despots have been able to use the U.S. president as a shield for their attacks on press freedom and human rights, said Joel Simon, executive director of the Committee to Protect Journalists.

“I’m seeing it more and more,” he said. Trump, he added, “is providing a context and framework for all sorts of authoritarian leaders—or democratic leaders and others who are dissatisfied or upset by critical media coverage—to undermine and discredit reporting.”

In February, for example, Syrian President Bashar Assad brushed off an Amnesty International report that some 13,000 people had been killed at one of his military prisons by saying, “You can forge anything these days, we are living in a fake news era.”

In the Philippines, President Rodrigo Duterte has complained of being “demonized” by “fake news.” Last month, with Trump laughing by his side, he called reporters “spies.”

Of course, this push back on the “fake news” moniker is rich in light of the “Epic Mistake” that ABC was forced to correct just last week regarding their “bombshell” Michael Flynn story (see: ABC Makes “Epic Mistake”, Retracts Bombshell Flynn Story).  Their “fake news” story which claimed that Michael Flynn would testify that “candidate” Trump, rather than “President-elect” Trump, ordered him to contact the Russians cost investors billions of dollars in stock market losses in a matter of seconds…but there was just one problem…it was all “fake news.” 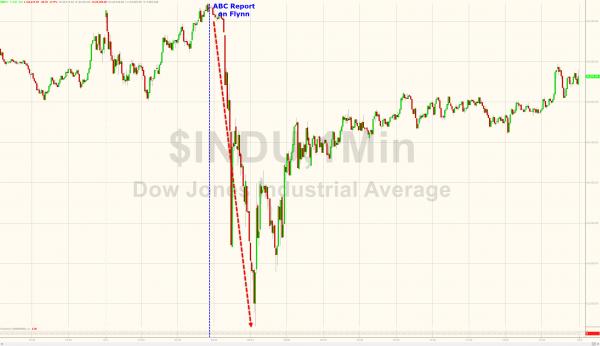 But none of that seemed to factor into Politico’s suggestion that Trump has effectively condoned human rights atrocities by authoritarian rulers from Venezuela to Myanmar with his often-repeated catch phrase.

And in a meta-moment in July, Venezuelan President Nicolas Maduro complained to RT, the Russian propaganda outlet, that the world media had “spread lots of false versions, lots of lies” about his country, adding, “This is what we call ‘fake news’ today, isn’t it?”

Over the weekend, a state official in Myanmar attracted notice when he said, “There is no such thing as Rohingya. It is fake news,” referring to the persecuted ethnic group.

Those are hardly the only examples of Trump’s phrase being deployed internationally: In March, Chinese state media dismissed a prominent rights activist’s account of torture as “fake news.” And in May, the People’s Daily ran an op-ed with the headline, “Trump is right, fake news is the enemy, something China has known for years.”

Not surprisingly, White House press secretary Sarah Huckabee Sanders pushed back against the idea that Trump bears responsibility. “This story is really ridiculous,” she said in an email. “The president isn’t against free speech but we do think reporting should be accurate.”

Ironically, despite liberals constantly arguing that the Trump White House has lost the respect of international leaders, on this particular issue NYU professor Ruth Ben-Ghiat feels that he is a “very important figure.”

Ruth Ben-Ghiat, a history professor at New York University who studies authoritarianism, said that, to her, the phrase does now have a clear meaning: “It’s anything that contradicts with a leader’s version of reality,” she said, pointing to the situation in Myanmar. “You can will away genocide, you can will away events that you didn’t want people to know happened.”

Ben-Ghiat recently published a New Yorker story asking why so many fascist memorials remain in Italy, and was stunned by the number of responses she received in Italian on Twitter that attacked her using the phrase “fake news,” once again, in English.

“People still see the president of the United States as a very important figure. That’s his slogan,” she said. “It’s one prong of a program that also is dismissing human rights, the whole turn against liberal democracy, the new illiberalism.”

Leaders, of course, have been seeking to stifle dissenting voices since long before Trump, but Simon said that the cudgel of “fake news” gives them an additional tool. Traditionally, he said, repressive leaders most often justify silencing reporters by citing the fight against terrorism. “I don’t think it’s going to supplant anti-terror,” he said, “but I think it will supplement it quite nicely.”

Of course, if the mainstream media is truly worried about being called “fake news” then perhaps the easiest solution is the best solution…stop reporting fake news….just a thought.

Most reports have presented North Korea’s nuclear retaliatory capabilities as a rapidly advancing part of their military, and one which may preclude a unilateral US attack against them. Secretary of Defense James Mattis has rejected that idea. On Friday, Mattis said analysis of the most recent North Korean test launch, the one that led many Read More…

Every television newscast: staged reality Watch how tonight’s Trump-Hillary debate is set up. Are the two podiums the same size? No? Who has the bigger podium? Is the lighting even, or are there shadows? Where do the shadows fall? Is there blue color in the background, which exudes a “calming effect?” How is the moderator, Read More…

The 31st Olympic summer games are underway in Rio de Janeiro, Brazil, and thousands of athletes and spectators from around the world have gathered for the event which will serve as prime time entertainment for the next couple of weeks. Every four years an insane amount of money is dumped into the spectacle as host Read More…