You know the Dakota Access Pipeline protests are working when oil interests start resorting to underhanded tricks to paint water protectors in a negative light. As the fight against the pipeline grows in North Dakota and around the country, dirty tricks are being deployed in an apparent attempt to delegitimize the opposition.

Mother Jones journalist Wes Enzinna, who was at the protests, says he witnessed a Dakota Access LLC employee try to infiltrate the Dakota Access Pipeline protests:

“An armed security agent employed by the company behind the controversial Dakota Access Pipeline was arrested Thursday after he was caught entering the camp of activists protesting near the Standing Rock Indian Reservation in southern North Dakota. After a car chase and a standoff during which he allegedly pointed his assault rifle at a local Sioux teenager, the man, whose ID indicated he was an employee of Dakota Access LLC, was arrested and handed over to the FBI.”

According to an official statement from the tribe, the man fired several shots from his gun before being peacefully apprehended by tribal police. Witnesses at the scene say he pointed his gun at several protesters. The man was clearly trying to provoke violence that could later be used to demonize protesters who have so far remained peaceful. 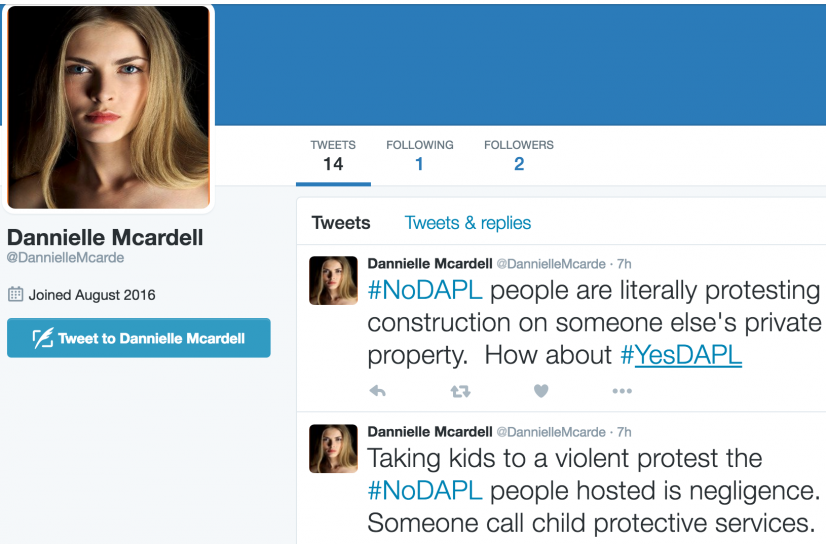 With very little organic support for the Dakota Access Pipeline remaining, groups allied with the pipeline builders now seem to be creating paid Internet trolls or bots to slam protesters while praising the pipeline.

DESMOG, an environmental blog, conducted an investigation and found what it says are “sock puppet” accounts tied to an oil industry lobby operating on Twitter:

“A DeSmog investigation has revealed the possibility that a front group supporting the controversial Dakota Access Pipeline (DAPL) — the Midwest Alliance for Infrastructure Now (MAIN) — may have created fake Twitter profiles, known by some as ‘sock puppets,’ to convey a pro-pipeline message over social media. And MAIN may be employing the PR services of the firm DCI Group, which has connections to the Republican Party, in order to do so.

“DeSmog tracked down at least 16 different questionable Twitter accounts which used the #NoDAPL hashtag employed by protesters, in order to claim that opposition to the pipeline kills jobs, that those protesting the pipeline at the Standing Rock Sioux Tribe’s encampment use violence, and that the pipeline does not pose a risk to water sources or cross over tribal land.

“On September 13, people began to suspect these accounts were fake, calling them out on Twitter, and by September 14, most of the accounts no longer existed.”

Big Oil is astroturfing pro-DAPL tweets, like they did for KXL. All these accounts with 0 followers tweeted in sync: pic.twitter.com/lR6H4Rcm6u

With the Dakota Access Pipeline builders resorting to backhanded trickery, it’s clear the tide is turning against the pipeline following law enforcement’s overwhelming militarized crackdown of the protests.

Five-hundred fifty-eight days after targeting an ostensive headquarters of the Islamic State in Mosul, Iraq, the United States finally admitted to bombing a family home and killing a university professor and three family members, wounding at least two more — even though the coalition suspected mere hours after the attack the ill-begotten mission had snuffed out the lives of Read More…

Anyone who has opened their mind to the possibilities and likelihoods of esoteric sciences, extra-sensory phenomena, and/or paranormal/spiritual experiences, will surely be familiar with the concept of black magick. To the alternative researcher, black magick has become a way of life—not because the researcher practices it, but because it is slowly seen in far too Read More…

Geopolitical moves are being made on the issue of North Korea. A day after South Korea’s new government offered to hold military talks with its neighbor to the North, the United States’ second-highest ranking military official admitted Tuesday that North Korean missiles lack the accuracy to effectively target U.S. cities. On Monday, South Korea’s defense ministry proposed Read More…