In mid-May US President Donald Trump announced that the US would be ending their financial support for the World Health Organization (WHO) and COVID-19 relief. The move was lambasted in the mainstream press as an out of touch politician pulling funding from a vital global health organization during the middle of a pandemic. To Trump’s supporters the decision was met with the typical cheering and celebrated as another Trump victory against the “globalists.” To understand what is actually going on we need to examine Donald Trump’s actions, not his tweets or media statements.

Let us start by looking at the funding provided by the US government to the WHO in previous years. The latest numbers from fiscal year 2018 (numbers are not available for 2019-20) show an estimated $281.6 million to the WHO from the US. The records indicate that after the US government, the Bill and Melinda Gates Foundation and GAVI, the Vaccine Alliance, are the 2nd and 3rd top financiers of the WHO. The US defunding the WHO actually tightens the technocrats already firm grip on another global institution.

This means when Donald Trump stated the US will no longer fund the WHO, the Gates Foundation and GAVI stepped into the top financial role. Additionally, GAVI was founded by and largely funded by the Bill and Melinda Gates Foundation in 2000. Either way, Bill Gates is the top donor and will continue to expand his influence and dominance of global health policy. As reported in Part 2 of my Bill Gates investigation, in 2010 the Bill and Melinda Gates Foundation launched the “Decade of Vaccines” and called for a “Global Vaccine Action Plan.” Since that time they have only grown their network and influence on WHO, GAVI and other organizations in order to shape public health policy in a way that reaps profits for the Gates themselves.

While Trump’s supporters viewed the US withdrawal from WHO financing as a win for nationalism or a black eye to the globalists, the truth is a bit more nuanced.

UN Secretary Guterres stated that the vaccine would not be enough and instead called for “global solidarity…to ensure that every person everywhere gets access to the vaccine.” Guterres also noted that “our individual health depends on our collective health.” 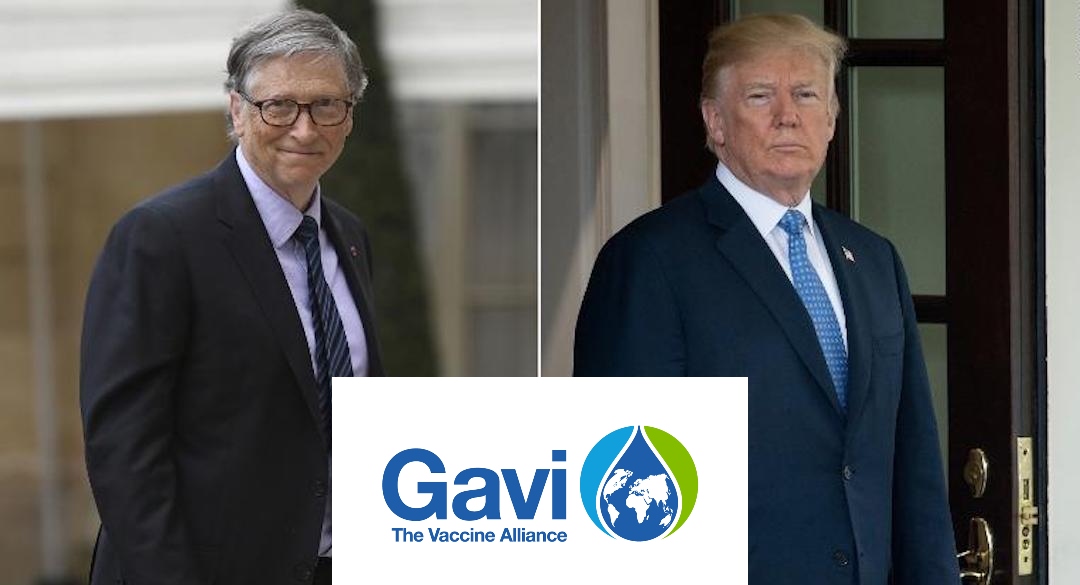 It was at this Global Vaccine Summit where a pre-recorded message from Donald Trump was played. In his video statement Trump said UK Prime Minister Boris Johnson asked him to record a message.

During his short speech, Donald Trump stated, “It’s great to be partnering with you. We will work hard, we will work strong.” Trump also called COVID-19 “mean” and “nasty” and said it has shown “there are no borders, it doesn’t discriminate.”

Trump’s support for GAVI was echoed on the twitter account for the United States Agency for International Development (USAID). “USAID echo’s @Realdonaldtrump‘s words and is proud to be partnering with @Gavi by committing $1.16 billion to protect people through vaccines, because #VaccinesWork,“ the tweet reads.  (It should be noted that USAID has also been accused of creating fake social media networks in an attempt to foment unrest in foreign nations.)

“As the Coronavirus has shown, there are no borders.”

USAID echo’s @Realdonaldtrump‘s words and is proud to be partnering with @Gavi by committing $1.16 billion to protect people through vaccines, because #VaccinesWork pic.twitter.com/btSLEEM4et

It was actually USAID who first announced the pledge of US $1.16 billion in February. The Trump administration included that $1.16 commitment as part of the budget for Fiscal Years 2020-2023. The budget for Fiscal Year 2021 included $290 million for GAVI. Remember that the records from fiscal year 2018 show an estimated $281.6 million to the WHO from the US. The Trump administration’s announcement of an initial $290 million investment easily surpassed the US investment in the WHO. Over the next three years the US will give more than $800 million to GAVI for their vaccination programs.

Once again, this puts Bill Gates and his organizations at the top of the global health pyramid. So what did Mr. Gates have to say about the success of the Global Vaccine Summit?

“Since its inception GAVI has helped vaccinate more than three-quarters of a billion children … And now, it’s stepping up and saying it’s willing to deliver a Covid-19 vaccine as soon as one is available to end the pandemic as soon as possible,” he said at the Summit. “We must also renew our commitment to delivering every life-saving vaccine there is to every child on earth.”

The Trump administration’s support for the development of vaccines to fight COVID-19 is also visible in a more recent virtual event organized by Global Citizen and the European Commission. On June 27, Global Citizen hosted the “Global Goal: Unite for Our Future – The Concert” which was supported by Bloomberg Philanthropies, Bill & Melinda Gates Foundation, Wellcome Trust, and Corporate Partners Citi, Procter & Gamble, SAP, Verizon and Vodafone. Once again, the funds raised at the event went to the Gates-founded GAVI.

During this event, Kelly Craft, United States Ambassador to the United Nations announced the US commitment of $545 million for GAVI towards COVID-19 relief efforts. “Together, we must work in an open, transparent, and supportive manner to build a safer, more resilient world. We must be the true multilateralist in the best sense of the word, working toward the common good,” Craft said.

At a May 2020 virtual summit, also organized by the European Commission, the Trump administration committed to giving another $775 million in emergency health, humanitarian, economic and development aid for governments, international organizations and charities fighting the pandemic. At this same event the Bill and Melinda Gates Foundation contributed $125 million.

Taken together – the May payment of $775 million; the early June announcement of $1.16 billion; and the late June gift of $545 million – these taxpayer funded investments will provide abundant resources for GAVI, and subsequently, the Bill and Melinda Gates Foundation. These funds easily outweigh the paltry $281.6 million the US was giving to the WHO.

It is important to understand that the WHO is a part of the United Nations, which itself is an “intergovernmental organization” that is attempting to replace nation-states as we know them today in favor of global governance schemes. GAVI is a “public-private partnership” where governmental bodies and private organizations partner up to provide some sort of public service. Neither of these organizations has been elected by the free people of the nations in which they operate.

Despite this fact, the Trump administration is continuing to give billions to GAVI and in doing so, furthering Bill Gates’ goal to vaccinate 7 billion people. Trump may have pulled funds from the WHO, but that decision allows Gates to take full control of WHO policy and continue to use US taxpayer dollars to fund vaccine projects, including a rushed vaccine for COVID-19. This was likely the plan the whole time.

As we have clearly demonstrated in previous reports, Gates has an outsized influence on the COVID-19 recovery and global health in general. A 2015 report titled, Philanthropic Power and Development: Who shapes the agenda?, examines the influence of global philanthropy and provides examples of the undue influence Gates and others can wield. The report noted that researchers have been critical of GAVI for following a “Gates-approach” on global health challenges, “focusing on disease-specific vertical health interventions (through vaccines), instead of horizontal and holistic approaches (e.g., health system strengthening).”

Further, in May 2019, Gavi CEO Seth Berkley referred to “anti-vaccine sentiment” as a disease that needs to be censored from the internet. Berkley’s statements are perfectly in line with Bill Gates’ vision and the larger agenda of eugenics. The public cannot be allowed to question the safety of vaccines — no matter how rushed they are.

This is why the Trump administration appointed a Big Pharma lackey to head “Operation Warp Speed,” Trump’s plan to fast track the development of vaccines for COVID-19. In May, Trump appointed Moncef Slaoui, a former executive with vaccine manufacturer GlaxoSmithKline, to serve in a volunteer position, assisted by Army Gen. Gustave Perna, the commander of United States Army Materiel Command. According to the Trump administration, Operation Warp Speed program is focusing on four vaccines, with the hopes of testing and producing 100 million doses by October 2020, 200 million by December, and 300 million doses by January. Slaoui has said he believes the goal of vaccines by January 2021 is a “credible goal.”

Once again, Gates’ fingerprints are all over the situation. Slaoui himself has a long history with the Bill and Melinda Gates Foundation, sitting on the boards of companies that are connected to the organization.

It appears that despite the public pronouncements of divesting from the WHO or tweets about standing up to the globalists, the Trump administration continues to push the agenda to vaccinate every person on the planet.

You can only get so far with orders, and the misuse of power. The same goes with the restriction of human action. The war on drugs has been an abject failure, as has been the American ‘democracy.’ It is the same with a corporatized prison system, and so too, will be the attempted overtaking of Read More…

The troubling results of this study only add to the growing body of evidence that has linked glyphosate to a host of health problems — including cancer, digestive problems, and reduced fertility. BUENOS AIRES, ARGENTINA – A new study conducted by Argentinian researchers has found that glyphosate – the controversial herbicide marketed by Monsanto (now Bayer) Read More…

Welcome to The Daily Wrap Up, a concise show dedicated to bringing you the most relevant independent news, as we see it, from the last 24 hours (1/25/19). As always, take the information discussed in the video below and research it for yourself, and come to your own conclusions. Anyone telling you what the truth Read More…

22 Replies to “Vaccine Bait & Switch: As Millions Pulled From WHO, Trump Gives Billions To Gates-Founded GAVI”