Washington, D.C. – In 2015, the United States spent more on its war machine than the next six countries combined, with a total of $596 billion spent on military expenditures. This week the U.S. House of Representatives passed its version of the annual National Defense Authorization Act (NDAA), with roughly $602 billion slated to be spent on military programs and armaments in the 2017 budget.

To put this amount in perspective, the U.S. spent more on its military than the next six nations combined, with China coming in second at $215 billion, followed by Saudi Arabia at $87 billion, Russia at $66 billion, with the United Kingdom, India and France spending roughly $50 billion each on defense expenses. 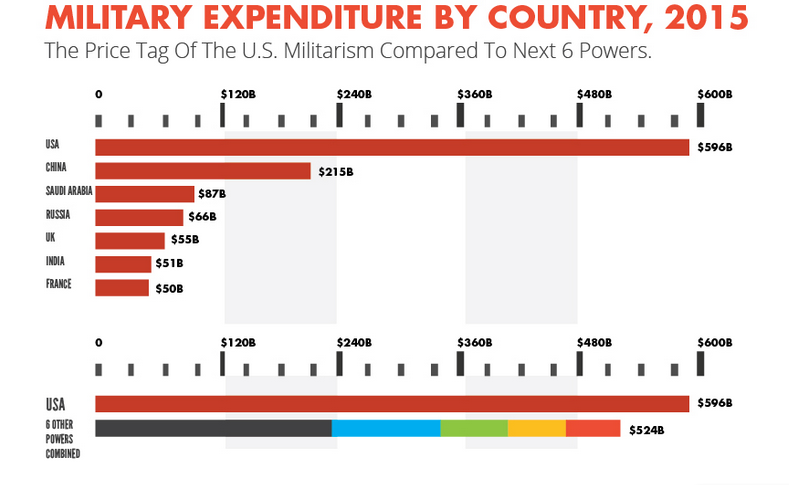 When looking at this spending in context, the U.S. not only spends more than the next six countries combined, but spends almost triple the amount on military expenses than the second biggest defense spender in the world, China, according to data from the Stockholm International Peach Research Institute.

These figures come on top of the recently announced $1 trillion dollar nuclear missile modernization program that has been curiously absent from public discourse, having not even been mentioned in the televised presidential debates.

All of this comes as the U.S. pivots from the “Global War on Terror,“ to a more traditional defense posture. The reasoning behind this is simple; who needs new tanks, bombers, fighters and missiles to fight ISIS or al-Qaeda? There simply wasn’t enough money to be made in bombing jihadists in tents in the desert, thus the drums of war in the media, regarding an “aggressive Russia,” began to be played as to allow for the return of traditional military-industrial complex/Cold War posturing.

The sheer enormity of the sums being given to the military-industrial complex is enough to boggle the mind. Think for a moment how else that $600 billion could be spent to actually assist in creating growth rather than death.

Consider that in January 2015, the U.S. Department of Housing and Urban Development (HUD) found there were 564,708 homeless people on a given night in the United States – the government could actually purchase a $1 million dollar home for each individual homeless person in the U.S. and still have money left over.

Or perhaps the money could be spent on the rapidly eroding domestic U.S. nuclear infrastructure. Although the media spotlight is rarely shined upon America’s aging nuclear infrastructure, U.S. nuclear power plants are decaying rapidly, precipitating numerous nuclear environmental disasters across the country. The Last American Vagabond recently reported on four nuclear disasters playing out across the country, with massive amounts of radioactive material having been leaked.

Rather than investing in these terminal goods, such as bombs and bullets, which are meant for destruction, we should be investing in capital goods that are able to provide growth. The U.S. war machine spends hundreds of billions of dollars per year waging war against humanity, while Americans at home are dying from a crumbling nuclear infrastructure and crippling poverty.

Alaska has received some strange weather lately. It’s been weird for the last couple decades or so, but there seems to have been some sort of correlative spike in these enigmatic weather patterns to two possible scenarios that have unfolded within the last couple decades in Alaska: global climate change or the insidious grand-daddy of Read More…

Welcome to The Daily Wrap Up, a concise show dedicated to bringing you the most relevant independent news, as we see it, from the last 24 hours (3/6/19). As always, take the information discussed in the video below and research it for yourself, and come to your own conclusions. Anyone telling you what the truth Read More…

The Relentless Push Towards War

The only real constant to be found in both European and US politics is war.  A steady feature of both regions for the past 20+ years has been small, lucrative conflicts waged against countries unable to effectively defend themselves.  It doesn’t seem to matter who’s in office in the US = Republican/Democrat, conservative/liberal – there’s Read More…