The initial U.S. government assessment of the chemical attack in Syria has concluded that some type of nerve agent was used – however the specific agent used is unknown, government sources told Reuters, adding that the U.S. government “had not yet conclusively determined whether the attack was carried out by President Bashar al-Assad’s Syrian government forces.”

The revelation makes Israel’s Monday morning strike on Syrian military positions known to house Russian forces all the more troubling, as this appears to be yet another kneejerk rush by the West to conduct major foreign policy maneuvers based on contested events before all the facts are in.

8) So- Trump announces Syria troop withdrawal and within days we are to believe that Assad launches a massive chemical attack on his own civilians?

Why would Assad do the one thing that would surely backfire on him, his family & friends? Why would he sabotage their hard-won goals & put their lives at risk at a time of maximum power?

The answer of most Western commentators is simple — because Assad is an irrational idiot.

Bear in mind that nearly all the information and physical evidence available from the attack site in Syria has come from anti-Assad sources linked to al-Qaeda affiliate al-Nusra, which controls the area. This includes the so-called White Helmets, who are opposition surrogates. The established narrative derives from this material as well as from bipartisan assertions of Assad’s “certain” guilt, even from normally liberal Democrats, which are being presented as fact. –American Conservative

The West has similarly imposed a variety of sanctions on Russia after determining that the Kremlin was behind the March 4 poisoning of former double-agent Sergei Skripal in Salisbury, UK. In fact, the chief scientist from the UK’s Porton Down military laboratory facility, Gary Aitkenhead, told Sky News (in a statement which was later retracted) that they had been unable to prove that the novichok nerve agent used to poison Sergei and Yulia Skripal came from Russia.

#Salisbury attack: Scientists have not been able to prove that Russia made the nerve agent used in the spy poisoning. Porton Down lab’s chief exec reveals the details in this interview pic.twitter.com/qFNgPlr6vS

“We were able to identify it as novichok, to identify that it was military-grade nerve agent,” Aitkenhead said. “We have not identified the precise source, but we have provided the scientific info to government who have then used a number of other sources to piece together the conclusions you have come to.”

Considering that, according to The Telegraph, Skripal has reported ties to former MI6 agent Christopher Steele, and the UK’s own chemical experts can’t identify the source of the poison, further investigation is clearly warranted before slapping sanctions around.

So while the UK moves to aggressively disarm their citizens – recently going on an “anti-knife” campaign, they are at the same time provoking a potentially far deadlier conflict with a nuclear superpower using flimsy evidence.

US “will respond” to chemical attack

Following the Syrian chemical attack, US Ambassador Nikki Haley stated “I could hold up pictures of babies lying dead next to their mothers, in their diapers, all lying together, dead, ashen blue, open eyed and lifeless, white foam bubbling from their mouths and noses” concerning the so-called chemical attack. She claimed that the use of chemical weapons in Syria is becoming “normalized.”

Haley added that the US “will respond” to uses of these weapons.

“We are at the edge of a dangerous precipice… we have reached the moment where the world must see justice done.” –Nikki Haley

Meanwhile, President Trump tweeted several statements regarding the alleged attack as if it was already confirmed, just as one would expect to accelerate the escalation:

Many dead, including women and children, in mindless CHEMICAL attack in Syria. Area of atrocity is in lockdown and encircled by Syrian Army, making it completely inaccessible to outside world. President Putin, Russia and Iran are responsible for backing Animal Assad. Big price…

….to pay. Open area immediately for medical help and verification. Another humanitarian disaster for no reason whatsoever. SICK!

The US also said yet again that Russia is “ultimately bearing responsibility” for all chemical incidents in Syria, regardless of who carried them out, after rebel sources accused Damascus of gassing dozens in Eastern Ghouta’s Douma.  In other words, even if the “chemical attack” was carried out by US-backed “rebels”, or better yet “ISIS”, it’s Putin’s fault.

“The regime’s history of using chemical weapons against its own people is not in dispute,” said the US State Department, indicating, however, that it was relying on “reports,” being unable to confirm the incident. “Russia ultimately bears responsibility for the brutal targeting of countless Syrians with chemical weapons.”

Meanwhile, the UN Security Council met on Monday to discuss the latest developments – said Staffen de Mistura, the UN Special Envoy to Syria.  “Recent developments carry more than ever before” the risks contained within the multiple “fault lines in the Middle East” that could have “absolutely devastating consequences, which are difficult to even imagine,” the official said, underscoring the possibility that the crisis in Syria may spiral into a larger international security crisis.

“The United Nations is unable to independently verify or attribute responsibility for this attack, but we have all parties to show utmost restraint and avoid any further escalation or confrontation,” de Mistura said.

In other words – let’s first chat about that chemical attack before WWIII breaks out.

Unsurprisingly, Russian officials say they have found no trace of chemical weapons use while searching through Syria’s Douma region – and say that photos of victims posted by the White Helmets are fabrications, according to Russia’s Defense Ministry.

Horrific images out of besieged Douma tonight of a suspected Chlorine attack by the Assad regime. Medical services on the ground say 35 confirmed dead, treating more than 700 for exposure. pic.twitter.com/OfveWyeg5D 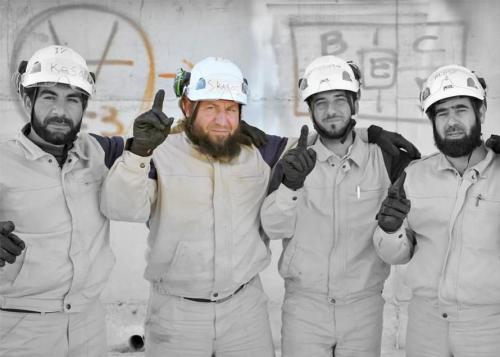 The specialists “found no traces of the use of chemical agents” after searching the sites, the statement said.The center’s medical specialists also visited a local hospital but found no patients that showed signs of chemical weapons poisoning. “All these facts show… that no chemical weapons were used in the town of Douma, as it was claimed by the White Helmets,” the statement said, referring to the controversial “civil defense” group that was among the first to report about the alleged attack.

“All the accusations brought by the White Helmets, as well as their photos… allegedly showing the victims of the chemical attack, are nothing more than a yet another piece of fake news and an attempt to disrupt the ceasefire,” the Reconciliation Center said. –RT

As well documented by Disobedient Media and elsewhere, the White Helmets are an organization funded by the United States which operates throughout various regions within Syria to “help” the anti-Assad effort while snapping convenient photos of Assad’s alleged regime-change-worthy atrocities.

The Syrian Civil Defense Force (aka the White Helmets) is funded in part by United States Agency for International Development (USAID). Included here are two links showing contracts awarded by USAID to Chemonics International Inc. (DBA Chemonics). The first award was in the sum of $111.2 million and has a Period of Performance (POP) from January 2013 to June 2017. It states that the purpose of the award will be to use the funds for managing a “quick-response mechanism supporting activities that pursue a peaceful transition to a democratic and stable Syria.” The second was in the sum of $57.4 million and has a POP from August 2015 to August 2020. This award was designated to be used in the “Syria Regional Program II” which is a part of the Support Which Implements Fast Transitions IV (SWIFT IV) program.

This funding was used, if not entirely, then in part to finance the White Helmets. The Syrian Civil Defense Force website lists Chemonics as its primary supporter alongside NGO Mayday Rescue, who operate out of offices in Turkey, Jordan and Dubai.

Of course, that didn’t stop Netflix from producing an Academy Award winning documentary about the White Helmets. We’re sure recently added board member and former Obama National Security Advisor Susan Rice is happy considering all of the taxpayer money the previous administration spent funding the group.

Israel Continues Its Interference In The Syrian Crisis

On June 2, Syrian Arab News Agency reported on Israeli aggression on the T4 airbase, located in the eastern countryside of Homs province. It’s recognized that the Syrian Air Defense System managed to destroy two missiles. The remaining rockets hit targets on the territory of the base, resulting in one martyr, two injured servicemen, and Read More…

Asked to explain difference between Saudi airstrikes in Yemen and Russian airstrikes in Syria, State Department spokesperson struggles to answer. A State Department official on Tuesday struggled to answer why the U.S. has condemned Russian bombings in Syria for causing civilian deaths while simultaneously aiding the Saudi Arabia-led campaign in Yemen, which has done the Read More…