The Washington Post in a piece penned by David Ignatius, attempts to showcase US progress in eastern Syria where it admittedly and intentionally created the self-proclaimed “Islamic State” (ISIS) and where it now claims it is fighting and defeating it with proxies on the ground as well as an expanding US air and ground presence.

Titled, “As the Islamic State falls in Syria, one city offers a preview of the country’s future,” the piece attempts to portray efforts by the US to fill the vacuum left in the wake of a shrinking ISIS as being filled by stability brought by US proxies – primarily Kurdish militias.

To look at people’s wary faces, uncertain but with a trace of hope in their eyes, it’s like they’re waking up from a nightmare. The newly formed town council is meeting, created by the Kurdish-led military force that cleared the town, and it seems to be getting cooperation from local Arabs. A new internal security force is policing the streets and occasionally pops off warning fire. At a warehouse near the town center, the first shipment of American food arrived on Wednesday; sacks of flour and rice are stacked on pallets, ready for distribution, and much more is coming in the next week, says veteran U.S. relief coordinator Al Dwyer.

But were real hope within the grasp of people residing in regions of Syria currently occupied by US forces and their proxies, it would mean Syria would be the first nation in modern history to see unity and progress in the wake of US military intervention instead of the division and destruction that has followed virtually everywhere US boots have set foot on from Somalia to Libya in Africa, to Iraq and now Syria in the Middle East, and Afghanistan in Central Asia. 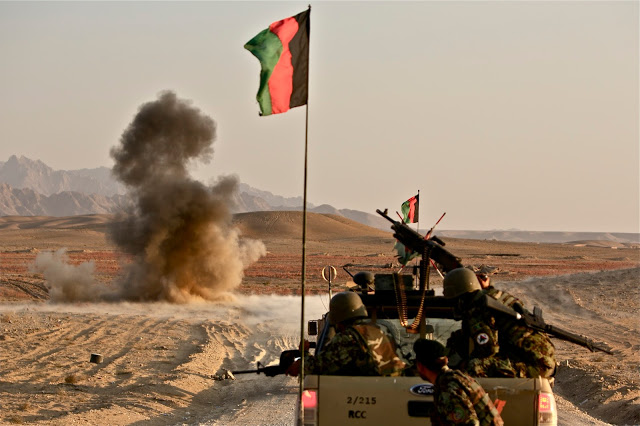 Contradicting Ignatius’ strained narrative even further is the contrasting and very real return to normal Syrians are enjoying in government-controlled regions recently liberated by Syrian forces, including Aleppo, Hama, and Homs, as reported by the United Nations Refugee Agency.

Aid agencies estimate that more than 440,000 internally displaced people have returned to their homes in Syria during the first six months of this year. In parallel, UNHCR has monitored over 31,000 Syrian refugees returning from neighbouring countries so far in 2017. Since 2015, some 260,000 refugees have spontaneously returned to Syria, primarily from Turkey into northern Syria.

The main factors influencing decisions for refugees to return self-assisted mostly to Aleppo, Hama, Homs, Damascus and to other governorates are primarily linked to seeking out family members, checking on property, and, in some cases, a real or perceived improvement in security conditions in parts of the country.

Not mentioned by the UN is eastern Syria or the northern city of Idlib currently occupied by US-armed, backed, funded, and protected militants with open allegiances or – in fact – operating under the banner of al-Qaeda and the Islamic State.

While life visibly returns to normal in liberated cities where government forces have restored security and stability, the US media is spinning familiar lies recycled from the aftermath of previous invasions in Iraq and Afghanistan, as well as the devastating military intervention in Libya in 2011.

In all cases, US intervention not only divided and destroyed each respective nation, but created a breeding ground for extremism the US itself appears to be fueling to further its geopolitical goals both within these targeted nations and along their peripheries. 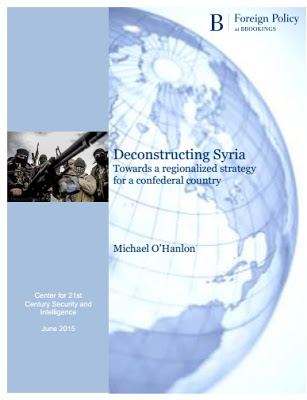 The US has also openly declared its intentions within policy papers spanning several years now, to use territory it takes and holds in Syria as a springboard – not to restore security and stability – but to perpetrate the deadly conflict.

US policymakers from the corporate-financier funded think tank, the Brookings Institution, have repeatedly published papers over the years detailing this plan. In a 2016 paper aptly titled, “Deconstructing Syria: A Confederal Approach,” it’s stated clearly that (emphasis added):

…the United States and partners would seek to help local allies expand de facto safe havens and bring governance to them. It would not declare safe havens formally in the beginning, but could offer warnings to Assad not to bomb certain areas and neighborhoods lest his air force face reprisal action later. Over time, ISIS and related groups would have to be defeated. Assad or his close associates could be tolerated within a sector consisting mostly of Alawites and Christians. (Perhaps Assad could even nominally remain president for a time, if truly necessary, as long as he did not deploy security forces in those parts of Sunni-dominant Syria granted autonomy.)

The Brookings paper also makes it abundantly clear that the US aims to remove the Syrian government from power, and are not merely “targeting Islamic State militants.” The report clearly states:

When appropriate, the safe zones would also be used to accelerate recruiting and training of additional opposition fighters who could live in, and help protect, their communities while going through basic training.

As far back as 2012, Brookings policymakers would call for the creation of the very sort of “safe havens” now taking shape in eastern Syria via US military intervention. A March 2012 Brookings Institution paper titled, “Middle East Memo #21: Saving Syria: Assessing Options for Regime Change” (PDF), proposes the concept of “safe zones” or “safe-havens” not to fight the yet-to-be invented Islamic State, but specifically to assist US-backed regime change. It claims (emphasis added):

An alternative is for diplomatic efforts to focus first on how to end the violence and how to gain humanitarian access, as is being done under Annan’s leadership. This may lead to the creation of safe-havens and humanitarian corridors, which would have to be backed by limited military power. This would, of course, fall short of U.S. goals for Syria and could preserve Asad[sic] in power. From that starting point, however, it is possible that a broad coalition with the appropriate international mandate could add further coercive action to its efforts.

With this in mind, the “hope” Ignatius attempts to sell the public within the pages of the Washington Post is in reality a bid to sell US-induced disorder and perpetual war.

US plans to use seized and occupied territory in Syria to perpetuate, not end the Syrian conflict have been worked on openly for years under only the most tenuous veneer of propaganda – the same propaganda used to sell “mission accomplished” after the US invasion of Iraq in 2003, but before now over a decade of disorder that has stalked the nation-state of Iraq and its neighbors.

In reality, the “defeat” of ISIS in eastern Syria by US-backed forces is not the first step toward a hopeful future for Syrians, but the first step toward replicating the protracted and costly conflicts that are currently consuming Iraq, Afghanistan, Libya, and to a lesser extent, Ukraine, the Balkans, and beyond.

The Top Ten Marijuana Myths That No One Should Believe

Originally published on October 16, 2016 Even today, with 80% of states legalizing cannabis in some form, and half the country legalizing it for medical purposes, I have been called a lunatic for ever thinking that cannabis would be recognized for the miracle plant that it is. Shockingly enough many have yet to see through Read More…

The bodies of the victims of Munich’s recent mass shooting barely cold, German “authorities” and politicians have wasted no time in calling for more police state measures and the further clamp down on access to gun ownership in Germany. Bavarian Interior Minister Joachim Hermann is now pushing for going so far as to revise the Read More…

The five-member Federal Communications Commission has voted three to two to repeal net neutrality regulations. The three men who cast their votes in favor of repeal were Republicans Ajit Pai, Brendan Carr, and Michael O’Rielly. You did not elect any of these men. Prior to today you might not have even known the names of two Read More…