Netanyahu’s Thursday UN General Assembly speech predictably included the familiar props and visuals condemning Iran over what the Israeli prime minister says is a continuing nuclear program it is hiding from the world’s view.

Like pretty much all prior Netanyahu speeches focusing on Iran, he held up a physical “evidence” to illustrate his points as he spoke — this time it was a “proof” that Iran has yet another secret warehouse holding nuclear-related material in the form of an aerial photograph of the Iranian capital marked with a red arrow pointing to a large building.

Though this was perhaps a step up from the cartoon bomb performance at the UNGA in 2012, the act is now a fixture and entirely predictable after many others spanning years, barely eliciting much media excitement compared to six years ago.

But unlike the last number of similar speeches, US intelligence officials have told Reuters that the claims are not true. 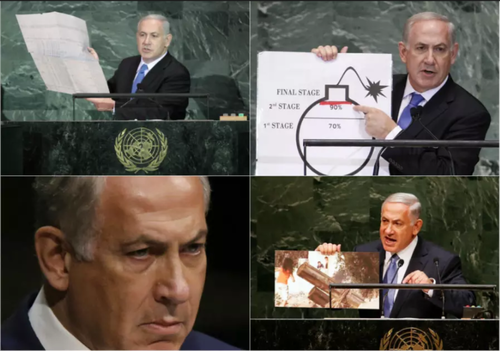 “I am disclosing for the first time that Iran has another secret facility in Tehran, a secret atomic warehouse for storing massive amounts of equipment and material from Iran’s secret nuclear program,” Netanyahu said as if breathlessly leading a breaking news press conference.

He said the site had previously held some 15 kilograms (33 pounds) of radioactive material that has since been moved in a curiously specific claim that would now seem very hard if not impossible to prove — given that… well it’s all been moved according to the claims. He called on the UN atomic agency to initiative immediate inspection with Geiger counters.

“Since we raided the atomic archive, they’ve been busy cleaning out the atomic warehouse. Just last month they removed 15 kilograms of radioactive material. You know what they did with it?” he said. “They took it out and they spread it around Tehran in an effort to hide the evidence.” 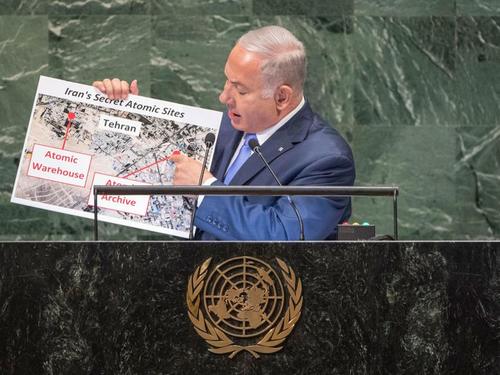 And on Twitter the Israeli prime minister began making a public appeal in parallel to his speech, asking people to “Google it” and offering the coordinates “35.5022 51.2997. It’s Iran’s secret nuclear warehouse in Tehran. Look for it and share it asking people to.”

Iranian officials were quick to seize upon his once again attempting to persuade through ample use of props and visuals, with Foreign Minister Javad Zarif mocking, “No arts & craft show will ever obfuscate that Israel is only regime in our region with a *secret* and *undeclared* nuclear weapons program – including an *actual atomic arsenal*. Time for Israel to fess up and open its illegal nuclear weapons program to international inspectors.”

And elsewhere foreign ministry spokesman Bahram Qassemi said, “The world will only laugh loudly at this type of false, meaningless and unnecessary speech and false shows,” according to Fars news.

Considering this usual run of events anytime Netanyahu address the UN, the only surprise came later in the day, when Reuters cited US intelligence officials who immediately contradicted the content of his speech.

Reuters called the claims of the freshly revealed purported atomic facility “nothing new” to the Americans, according to an unnamed intelligence source:

A US official, speaking on condition of anonymity, said the United States is aware of the facility Netanyahu announced and described it as a ‘warehouse’ used to store ‘records and archives’ from Iran’s nuclear program.

And further citing a second intelligence official, the report continued:

A second US intelligence official called Netanyahu’s comments ‘somewhat misleading. First, we have known about this facility for some time, and it’s full of file cabinets and paper, not aluminum tubes for centrifuges, and second, so far as anyone knows, there is nothing in it that would allow Iran to break out of the JCPOA any faster than it otherwise could.’

A separate Israeli media report also noted the contradiction between Netanyahu’s speech and US intelligence: “The claims gainsay the remarks made by Netanyahu, who said that the site, which sits a short distance from Shourabad, contained some 15 kg (33 pounds) of radioactive material that has since been moved.”

Also on Thursday the Israeli Defense Forces (IDF) made more claims connected with the UN speech, tweeting satellite images via its official account that claim Iran is establishing at least three missile factories inside Lebanon in partnership with Hezbollah, specifically in dense civilian neighborhoods of Beirut.

Israel has lately vowed to continue attacking Iranian forces stationed in Syria, and Thursday’s media information and propaganda blitz portend it is prepping for more rounds of strikes.

With Russia threatening response and now set to deliver the S-300 air defense system to Syria, it could be that Israel sets its sites on these purported Hezbollah “missile factories” on Lebanese soil.

Bipolar Disorder is one of the biggest mental health concerns in the United States, but instead of addressing the true, spiritual nature of the disease, the normal course of treatment involves harmful pharmaceuticals.  “I have Bipolar disorder” …say 5.7 million Americans. These patients have been labeled, categorized, and offered an understanding of themselves as diseased, sick, Read More…

Venezuela’s New Cryptocurrency Is A Scam

A perfectly predictable thing happened when the Great Oil Price Plunge of 2014 pulled the rug out from Venezuela’s oilconomy: Foreign creditors stopped lending to Venezuela, the debt-saddled government devalued the currency to cover budget deficits, inflation spiraled out of control (entering a death spiral last November), and, perhaps inevitably, the government defaulted on some of its $US bonds. (And all this amidst devastating Read More…

Welcome to The Daily Wrap Up, a concise show dedicated to bringing you the most relevant independent news, as we see it, from the last 24 hours (7/3/20). As always, take the information discussed in the video below and research it for yourself, and come to your own conclusions. Anyone telling you what the truth Read More…