“The further a society drifts from Truth, the more it will hate those that speak it.” – George Orwell

There are some who would have Americans believe that certain kinds of change are necessary to the modern survival of this country. In this time of limitless and unforeseen possibilities, that statement is inevitably true. Yet, this uncertainty is used to impose unnecessary restrictions upon the people. These restrictions have set this nation down a dangerous path that will slowly strip it of that which was once the sole ambition of those who set out to liberate the oppressed: freedom.

“Those who would give up essential Liberty, to purchase a little temporary Safety, deserve neither Liberty nor Safety.” – Benjamin Franklin

Deceiving the people you work for and spreading their information to the masses in most cases is a no-no, except when you are exposing a gross injustice and/or breach of rights by the very individuals charged with the defense of those rights. Then it becomes the duty of every American to expose this affront to the people. Whistleblowers are by and large people who are fighting for the rights of others at the expense of their own, and today, some of the most important whistleblowers in US history are being cast as traitors when in reality they are the true patriots of today.

2. There are cameras everywhere

You can’t go anywhere today without being recorded. From the traffic lights to the ATM machine, every move you make is watched and documented. I don’t know about you, but I don’t recall voting on these matters. They just sort of appeared, for our “safety” of course. As far as regulation goes, there are none. Our government can access these feeds at any point, for any reason, as long as it’s a matter of “national security.” Which I’m sure it always is.

3. Your vote no longer matters

Despite all the evidence that these machines are built to be tampered with, touch screen voting machines continue to be used as this obvious security breach goes purposefully overlooked. For years, researchers have spoken out about the many flaws built into these machines. They have found ways to reject ballots, swap votes or accept 50,000 votes from a precinct with just 100 voters. And for brevity’s sake — because there is enough on this topic to fill multiple articles — this is only one of the aspect out of the many different and varied ways our “democracy” is simply an illusion. Ask yourself if your vote still counts.

4. The news only tells you what they want you to hear

It’s no secret that the mainstream media is no longer the inquisitive and impartial figure that it once was.. if ever it was. This is unfortunately something that those of us aware enough to realize have come to accept. There are those who mindlessly allow their decisions to be made for them by whatever one-sided story they choose to believe — these individuals are already lost — and this is done out of convenience and fear to avoid being on the perceived outside. When one must rely on the Independent News outlets of the world to seek out the truth behind the lies, it becomes obvious that our nation is far different from the way they want us to see it.

5. The loss of free speech

The last thing the government wants is for those of us seeing what’s coming to speak our minds. They have worked too long and too hard to surreptitiously manipulate the general population into feeling that they need more protection, and more security, which by default means a loss of everyday liberties, of course. Today, we see countless examples of Americans being arrested by police while having broken no law other than in many case simply speaking their mind, and not immediately ignoring their own inherent rights by acquiescing to the unjust authority of the enforcer — and make no mistake, in the eyes of today’s police state, that is the worst crime of all. 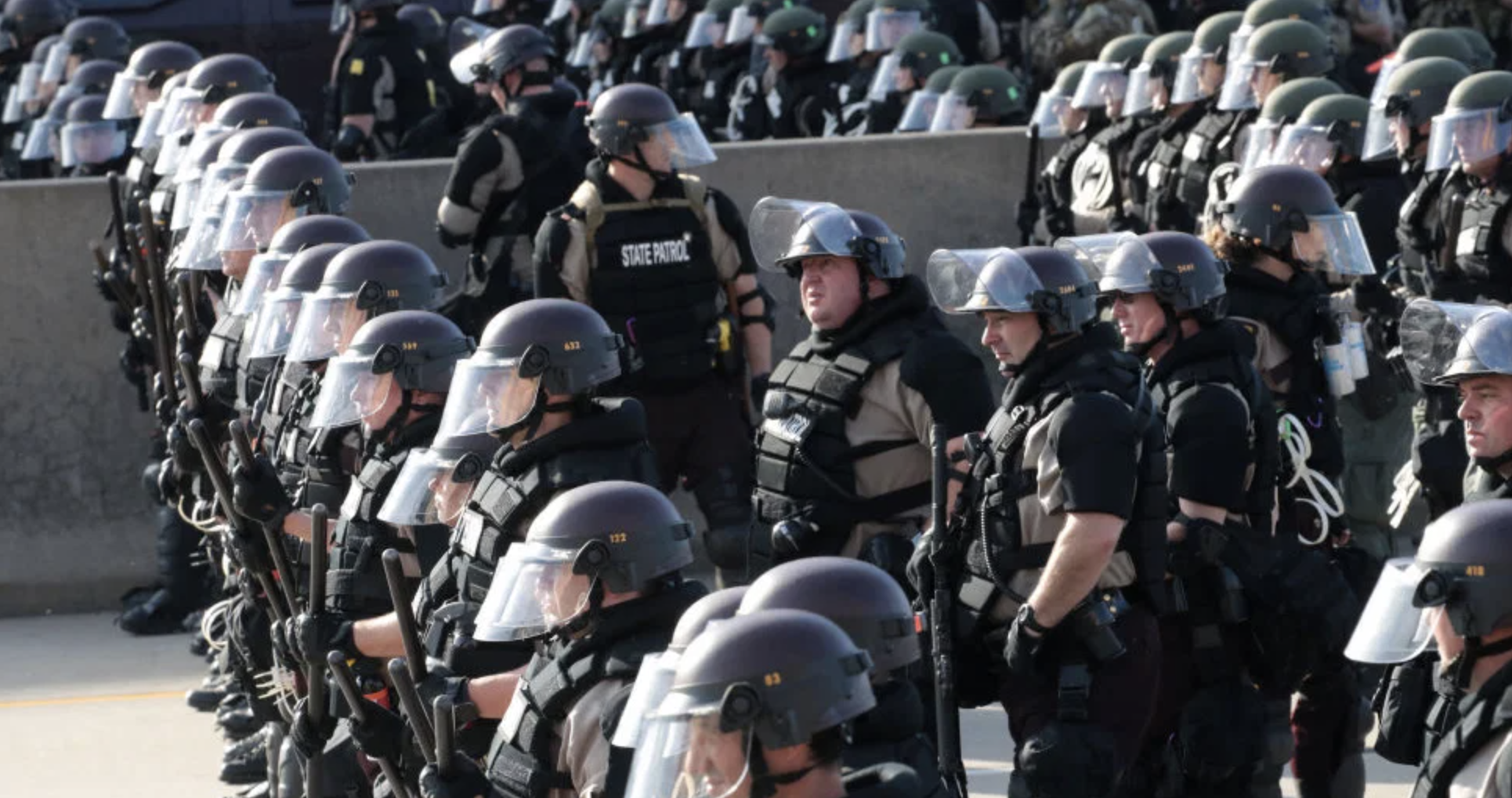 6. The Government monitoring your phone and location

I don’t think this topic even needs to be explained, but I will continue for those of you living under a rock. At this point, for some vague generalized reason of combatting a nameless, faceless, undefinable idea, the government openly tracks, monitors and documents every action taken, every word spoken, and every transaction made while using your phone, using your computer, or simply walking down the street. At one point, not so long ago, political leaders were aghast at even the accusation of such an atrocity, such a violation of the sanctity of the government-citizen relationship.. right up until it was revealed that they had been doing all those things, all along. And now it’s for our safety.

Some of the largest red flags would be the “War on Terror,” the “War on Drugs,” and the most current use of the tactic, and the newest endless war, the “war on COVID-19.” These are wars with ambiguous goals that can never be fully reached. There will always be another step or another threat. These perpetual wars will never end, nor were they meant to. They were manufactured to give justification to supposed temporary measures such as: massive government spending, spying on American citizens, suspension of civil liberties, and massive military expansion.

The Patriot act, in the same way as the wars mentioned above, was never meant to be temporary as we were told. This is exactly how just about every totalitarian rule in history has begun. We are told an extreme measure is necessary for protection — or whatever reason is conjured up — and it may mean a loss of certain liberties (also undefined) that will be “temporary;” only put in place “until the threat is over.” Now, decades later, the insultingly named Patriot Act is stronger than ever, assimilated into every aspect of governmental action.

Halliburton subsidiaries were given nearly $400 million to build detention centers in the United States, for the purpose of unspecified “new programs.” There is no other explanation for detention centers — they are built to detain. Obama was quoted saying that these centers were for “Prolonged Detention” for those the government suspected might commit terrorist acts. “Might” being the key word there. We see the presence of heavily armed UN security vehicles stock piled secretly behind a Kellogg cereal factory, and the picture begins to come into focus. With the recently successful government manipulation of certain hyper-partisan Americans into thinking that authoritarian steps are positive, even necessary, if used on the right people, many can no longer see the forest for the trees. An action such as keeping Guantanamo Bay open for example, even expanding it, when very recently the American people was calling for it to be closed almost in unison, is now seen as a “good thing” under the illusion that it will be used for “the right people.” The question is, who chooses the “right people,” and how have we lost sight of the real issue, and so quickly?

Instead of vetoing or signing a bill, there is third option that was made popular by the Bush administration that is rarely addressed. These signing statements, when used deceitfully, can be used to bypass the judiciary and undermine the rule of law as we know in the United States. It allows the president to pick and choose which laws he feels like following and which to ignore. For instance, here is one that stands out to me:

Bush’s signing statement: The president, as commander-in-chief, can waive the torture ban if he decides that harsh interrogation techniques will assist in preventing terrorist attacks. Obama was public about his outrage toward Bush’s decision to use such actions before he was elected, calling them “an unconstitutional end-run around Congress.” Obama took the very same action as president.

Similarly, today we see a gross abuse of what was meant to be used sparingly, yet now is a routine side-step of Congress, and that is the Executive Order. These were widely used by Obama, and openly criticized by Trump. Yet, now it has become the norm in the Trump Administration to simply rule by Executive Order.

It should no longer be hard to see where this nation is headed, or more aptly, where it has arrived. Even those blinded by partisan ideology can easily see the dangerous steps being taken — they just convince themselves that the one making the moves has “the right intentions.” Yet even if that is true, consider what might be left for the next individual to step into the omnipotent position that is being created. As the saying goes: “The road to hell is always paved with good intentions.” As intent is very important, especially today, it cannot be that which blinds us to the cage being built around us, or maybe more appropriately, the cage being reinforced around, above and beneath us.

Residents living in Newkirk, Oklahoma, and Kansas at the border are worried after the Department of Homeland Security (DHS) has announced plans to simulate the effects of biological weapons on buildings just outside their city under the DHS Science & Technology Directorate (S&T) which will conduct a program called the Hazards of Dynamic Outdoor Releases Read More…

Fukushima Passes Chernobyl As Worst Nuclear Disaster In History: Does Anyone Care?

The continued cover-up of the Fukushima impacts in Japan is likely due to the widespread contamination of soil, vegetation, and water prolific enough that it would lead to evacuations so massive in scope they could collapse Japan’s economy, the third largest in the world. TOKYO – According to peace and environmental justice watchdog NukeWatch, the Fukushima Read More…

How Do The People Of Truth Win The Current Information War?