The U.S. occupation force and its Kurdish proxy SDF in northeastern Syria are supposed to fight the Islamic State in its last hold out northeast of Euphrates. But the operations against the handful of towns ISIS (grey) still holds – launched only after long and unexplained delays – shows little progress. Last week it received a serious setback. 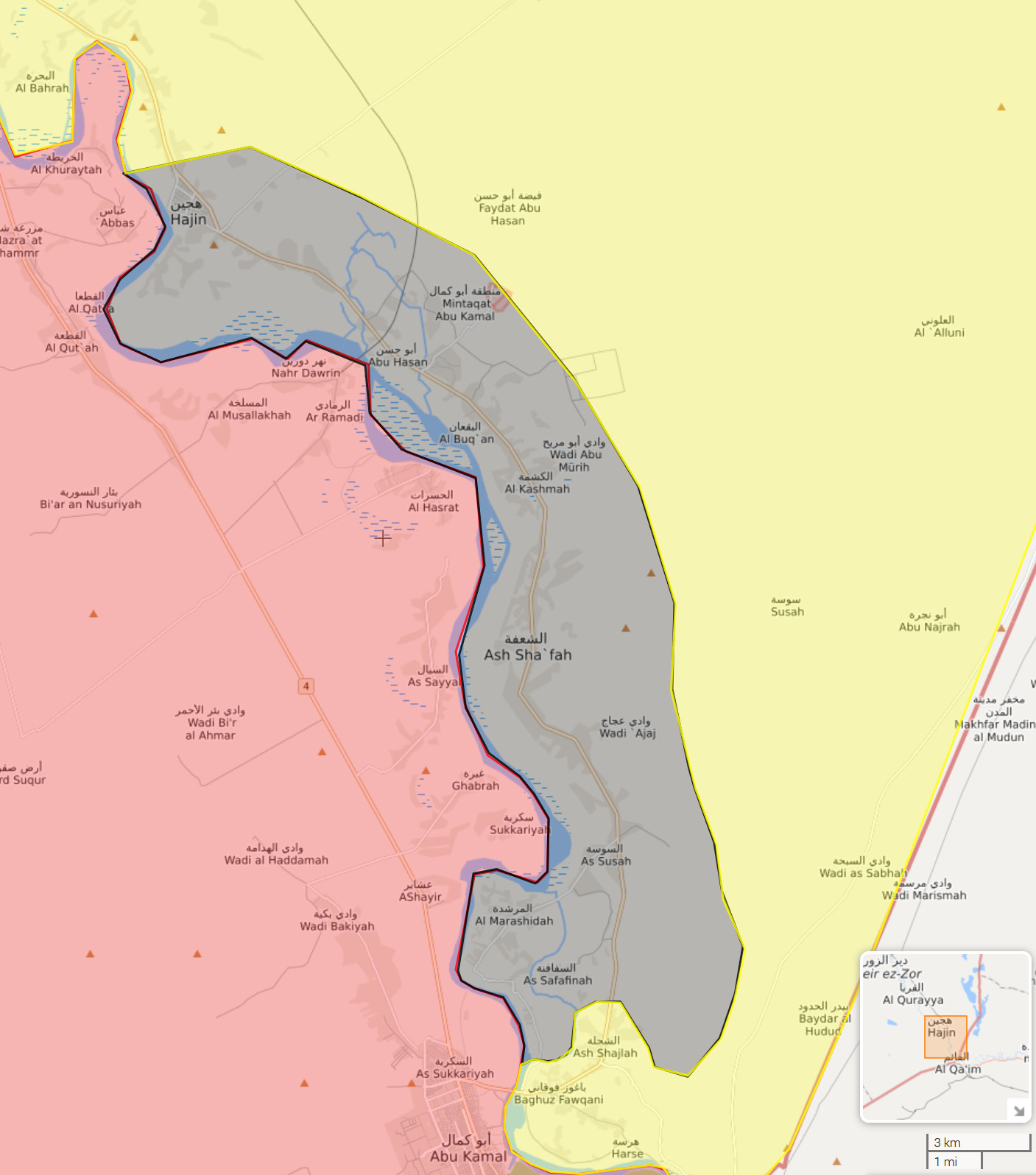 After several days of sandstorms (vid) hindered U.S. air support, ISIS counterattacked on October 11 against the U.S. led SDF. Suicide bombers blew up SDF checkpoints as ISIS broke through the lines. It retook several villages and on October 12 raided a refugee camp for local civilians that the U.S. coalition had set up near Al Bahrah (on the upper left of the map). Some 130 refugee families with about 700 persons were taken prisoners and brought to Hajin, a small city at the northern end of the ISIS held area.

Through local tribal elders ISIS requested to negotiate with the U.S. coalition about an exchange of prisoners. It also demanded medical and food supplies in exchange for 90 captured women it had isolated from their families. The request was rejected. ISIS now threatens to kill ten of the abductees per day unless its demands are fulfilled.

In his talk at the Valdai event yesterday, the Russian president Putin mentioned the situation east of the Euphrates:

Now we see what is happening on the left bank of the Euphrates. Probably, our colleagues know: this territory is under the patronage of our American partners. They rely on the Kurdish armed forces.But they have obviously left a loose end: ISIS remains in several locations and has begun to expand its area of influence recently. They took 130 families hostage – almost 700 people.

I think few of those present here know that they have made ultimatums, extended demands and warned that if these ultimatums are not met, they would shoot 10 people every day. The day before yesterday, 10 people were shot. Executed. They have begun to fulfill their threats.

This is just horrifying. It is a tragedy I think. We need to do something about it. Why do our colleagues keep silent?According to our information, several US and European citizens are among the hostages.

Everyone is quiet, there is silence as if nothing is happening.

Three days ago there was also a blue on green incident followed by defections from the ranks of the local proxy forces:

Two US-led coalition’s F-15 fighter jets have mistakenly targeted Kurdish units amid their offensive on the remaining forces of Islamic State (IS, formerly ISIS/ISIL) terrorists in Syria, RIA reported, citing a “military and diplomatic source.” It said six people were killed and 15 injured on the Kurdish side.The incident, which took place near the town of Hajin in the Syrian eastern Deir ez-Zor province, did not just disrupt the operation but also reportedly led to numerous defections in the ranks of Syrian Democratic Forces (SDF). Even worse, the terrorists managed to seize some territories in the area, the source added.

Today ISIS published photos of an execution of five local men accused of being spies for the SDF.

U.S. and French troops provide artillery support to the SDF and the U.S. and British air forces fly bombing attacks against ISIS positions. But SDF ground troops seem to be unable or unwilling to proceed against ISIS lines. The borders of the ISIS held area as provided by liveuamap have hardly moved.

During five and half months ISIS only lost some five miles of territory at the northern and southern ends of the small area it holds. How come the well supplied Kurdish forces under the direction of U.S. Special Forces and with strong artillery and air support are not able to achieve more against some 1-2,000 jihadis who lack heavy weapons and have no way to resupply?

Russian sources accuse the U.S. of not seriously fighting its opponent:

“The imitation of the fight against terrorists in this region of Syria has been going on for more than six months and has been used by Washington to justify its illegal presence in this country,” the source stressed.

The Syrian Observatory also reports of a constant stream of targeted assassinations and small attacks against SDF forces including by ISIS sleeper cells within the SDF held area. Many IED’s are buried in the wider area and hinder troop movements as well as reconstruction.

ISIS seems in general not confined to the neat frontlines shown on the map but has small units and sleeper cells moving far beyond that area. This points to a lack of willing troops to hold the line and to confine the ISIS forces.

The U.S. Weekly Strike Summary note lots of aerial attacks but the results are thin:

After a drop on October 7, 8 and 9 due to the sandstorms U.S. flight numbers in the area are again up to some two dozen per day.

Nearly all these attacks are on the small ISIS held area northeast of the Euphrates. The report mentions hits on “staging areas” and “assembly area sites”. But what does that actually mean? Isn’t any empty space a potential staging or assembly area site? And what is the engagement of a “tactical unit” supposed to mean? A bomb drop near some lone dude on a motorcycle?

The last four weekly summaries list a total of 349 strikes and 546 “engagements” but none of these seem to have had any effect on ISIS numbers or capabilities. Despite the high strike number there is no progress on the ground.

The current bombing campaign reminds one of the fake U.S. air campaign against ISIS in 2014 and 2015 (see table at bottom). Back then “ISIS excavators” were the most serious targets the U.S. reports mentioned. Back then it was also Russia that exposed the fake fighting and demonstrated how to really clobber ISIS.

That the SDF now claims that eliminating ISIS from the area will take even longer increases the suspicion that there is no real intent to fight it:

“The military operations in Hajin will take much longer than expected,” said Redur Khalil, a top SDF commander.”Daesh is benefiting a lot from weather factors, including sandstorms. They’ve helped it take cover from reconnaissance aircraft and other monitoring mechanisms,” he told AFP, using an Arabic acronym for IS.

For the record – the recent series of sandstorms in the area ended several days ago.

Like in 2014/2015 the U.S. seems again most interested in keeping ISIS alive as long as possible and to use its presence as a pretext for other purposes.

Joining me today is Whitney Webb, here to discuss her recent article on Moderna, as well as our previous discussion around your anonymity and privacy, and how these concepts are on the way out in lieu of a “reimagining” of our world where these concepts are a burden on the system; a system in which Read More…

Donald Trump’s top advisor, H.R. McMaster, will attend the Bilderberg meeting this week. His name is on the participant list. See it here. So much for draining the swamp. During the election, it was obvious Trump had no intention of taking down the deep state. It was merely a phrase fed to him by Steve Read More…

As YouTube is currently down site-wide (doing God knows what), yet will no doubt be up and running again in no time, it is a perfect opportunity for everyone to take a moment and consider what social media would be like without such an all-consuming government-infiltrated monopolistic platform overshadowing all others, and dictating who and Read More…