A statement from the spokesman of Yemen’s Armed Forces reported that the US-backed Saudi coalition dropped 38 airstrikes just over the course of Saturday. At least 12 of which targeted various areas of Hodeidah which constitutes a direct violation of the peace negotiations calling for a ceasefire.

Airstrikes killed at least 15 civilians since the peace negotiations began last week — including seven women and three children. Meanwhile, 28 sustained injuries, eight of whom were children as well as five women.

Yemen’s Ministry of Health pointed out that this displays the Saudi coalition’s unwillingness to engage in a peace process. “This expresses the unwillingness of these countries to stop the bloodshed and alleviate the suffering of the people of Yemen, which exposes the reality of these countries’ goals in their aggression against Yemen,” a statement from the MoH reads.

The negotiations showed progress on the issue of political prisoners — including those held in Saudi and Emirati prisons.

However, the head of the Sana’a national delegation, Mohamed Abdulsalam, pointed out that the presence of foreign troops in Yemen violates the Yemeni constitution:

“There is no excuse for the presence of foreign troops in Yemen as long as we are heading for a political solution,” he said. “The occupied territories are subject to external control such as Britain, Saudi Arabia, and the UAE, not for so-called legitimacy.”

Abdulsalam also stressed the dire nature of the humanitarian situation in Hodeidah and throughout Yemen. “The National Delegation is keen to lift the suffering of the Yemeni People and preserve the sovereignty and independence of Yemen,” he said in a statement. 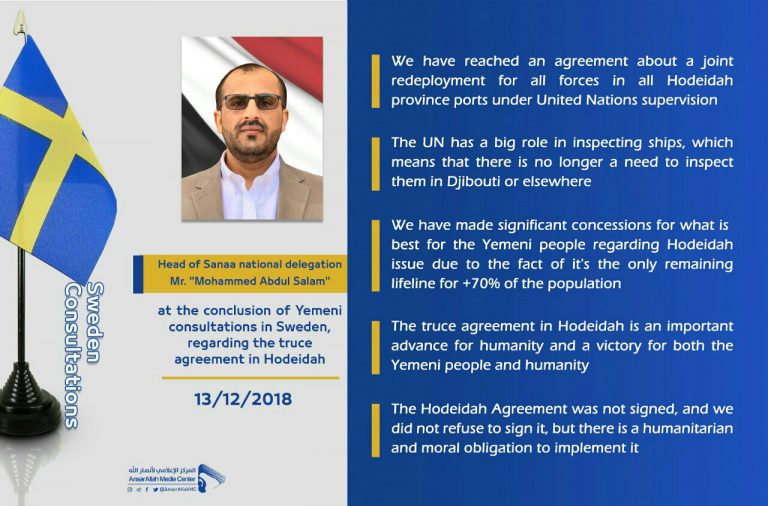 US-Backed War Crimes in Yemen and the Senate Vote

The vote passed 56-41 and signals a rare move to limit Washington’s war power. However, the bill will not end the war completely as it does not contain language to halt US drone strikes in Yemen. Under the bill’s passing, Washington can still conduct its own airstrikes against any target it deems “terrorist.”

The United States along with other western powers have provided virtually unlimited support to the Saudi coalition against Yemen in the form of troops, training, weapons, aircraft, and refueling said aircraft along with intelligence and logistical support for selecting airstrike targets.

This, along with the fact that the Saudis routinely target civilians, makes the United States and its Western allies complicit in war crimes. One such crime involved the targeting of a school bus full of children with double-tap airstrikes using precision-guided smart missiles.

Escalation In Armed Confrontations With US In Syria & Iraq

The US Biden administration’s failure to revive the Iran Nuclear Deal and de-escalate tensions in both Syria and Iraq, has led to a new round of violence which rests solely on a stagnant Middle East policy maintained by hardliners in Washington. Last year saw 7 rounds of indirect negotiations between Iran and the United States Read More…

[sic] – Indicates that the quoted matter has been transcribed exactly as found in the source text, complete with any erroneous or archaic spelling, surprising assertion, or other matter that might otherwise be taken as an error of transcription. WikiLeaks released their next leak from within the walls of the Ecuadorian Embassy, this time being the Read More…

Welcome to The Daily Wrap Up, a concise show dedicated to bringing you the most relevant independent news, as we see it, from the last 24 hours (11/18/21). As always, take the information discussed in the video below and research it for yourself, and come to your own conclusions. Anyone telling you what the truth Read More…