“The United States has built a dozen or more bases from Manbij to Al-Hasakah, including four airfields, and American-backed forces now control all of Syria east of the Euphrates, an area about the size of Croatia.”

On Tuesday a top Russian military official slammed the United States for “illegally occupying” a massive zone in southwest Syriasurrounding the American garrison of al-Tanf, effectively protecting some 6,000 armed militants that Russia has designated terrorists.

The Head of Russia’s National Defense Control Center, Colonel-General Mikhail Mizintsev, called the US-occupied area “the last stronghold of evil” which continues to fester with militants “on the territory of the independent state”. He identified a 55 km zone surrounding the base in a desert region along the Syrian-Iraq border, which American special forces and US-backed FSA groups have held since 2016 after taking the key crossing from ISIS.

“Perhaps, only our American partners do not want to see up to date how much has been done to revive peaceful life in Syria. They are holding with incomprehensible stubbornness the occupied 55 km area around al-Tanf where 6,000 armed militants are on the loose and are preventing the disbanding of the Rukban refugee camp,” the general said at a Syrian-Russian inter-departmental coordination headquarters, according to TASS.

The Rukban camp falls withing the US-occupied perimeter and is home to between 50,000 and 60,000 refugees stuck near the desolate Jordanian and Iraqi frontier, especially after Jordan closed its side of the border in 2016. Russia has accused US forces of preventing humanitarian aid from reaching the camp, except through the mediation of armed groups operating in the area, with some militants based in the camp itself.

Russia’s Foreign Ministry asked previously this week: “Why do the US’ partners insist on joining the militants from illegal armed groups to render humanitarian aid and not give their consent to real assistance to those in need in Rukhan?” Recent reports suggest the camp is on the brink of mass starvation, with the US and Damascus trading blame for holding up U.N. aid convoys into the camp, which is also occupied by armed groups fighting the Syrian government.

The Foreign Ministry further laid specific blame for a UN and Syrian Red Crescent convoy being turned away in November from the US-occupied zone by American occupying forces.

There is growing concern related to the dubious activity of the United State and its allies in Syria. The illegal occupation of the 55 km zone around the base in al-Tanf continues to be the basic source of destabilization in that part of Syria.

Meanwhile The New Yorker recently acknowledged the US presence in Syria to be much larger than previously thought, describing the total size of American occupied territory as “about the size of Croatia.” 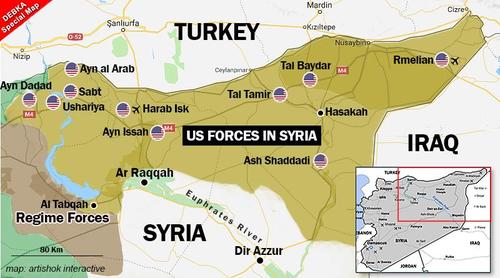 According to The New Yorker:

The United States has built a dozen or more bases from Manbij to Al-Hasakah, including four airfields, and American-backed forces now control all of Syria east of the Euphrates, an area about the size of Croatia.

A year ago a Pentagon official let slip that there are about 4,000 American personnel in Syria — a number which has likely climbed since then.

It goes without saying that of course there’s never been a Congressional vote or authorization on this, just the same shoddy post-911 AUMF fig leaf of “legality”.

#RukbanCamp Refugee testimony – near the American occupation base in #Tanf where they force refugee crisis & protect, recruit, train thousands of ISIS terrorists. @TLAVagabond #WhiteHelmets have asked to enter this camp to bring “humanitarian” relief (for ISIS) Via @smmsyria pic.twitter.com/4CuAbr747p

#RukbanCamp Refugee testimony – at the end of the interview, this man actually says “We ask help from the STATE” – not what we are told by FUKUS media shills who obfucsate U.S Coalition illegal occupation of #Syria territory & incubation of #ISIS cells in Rukban. #WhiteHelmets pic.twitter.com/fHxXaZitWY

Cure Your Own Cancer: The Suppression of Alternative Medicine

Every aspect of our society has seen a steady innovative progression over the last century. We have stood witness as flimsy wooden contraptions barely getting off the ground transformed into sophisticated jets capable of reaching incredible heights. The incessant beeps of the telegraph, became a massive global network of fibre optic communication, and what was once a vast and unknown planet has since been mapped Read More…

After it waged a veritable war against cannabis legalization in Arizona, coughing up half a million dollars for the campaign, Insys Therapeutics recently announced the ultimate victory has finally come to fruition: the DEA approved one of the company’s groundbreaking pharmaceuticals — synthetic marijuana — to be listed as a Schedule II substance. “Insys gave $500,000 last Read More…

In a decision hailed as a “landmark” victory for the First Amendment, a federal judge on Thursday struck down a Texas law requiring government contractors to sign a pledge vowing not to participate in the pro-Palestinian boycott, divestment, and sanctions (BDS) movement. “This is a complete victory of the First Amendment against Texas’s attempts to suppress Read More…