The area in which a group of veterans claims to have found a child trafficking bunker is owned by CEMEX, a multinational building company partially owned by the firm linked to the NXIVM cult, Bronfman E.L. Rothschild L.P.

Tucson, AZ — (TFTP) As we reported yesterday, a group of veterans known as Veterans on Patrol (VOP), which looks for homeless veterans around the area and offers them help to get them on their feet, spotted solar lights while on patrol and followed them until stumbling upon an underground bunker, that according to the group, is being used for child trafficking.

“The solar lights are what gave it away,” said Lewis Arthur. “If we hadn’t been walking on the right trail we would have never seen it, we would have walked right past it.”

When the veteran group reached the site, what they found was truly ominous. Around the site, the group found trees equipped with restraints, a stroller, a crib, hair dye, and pornographic material. Inside the bunker, they found a dresser and two crates. The area inside was only big enough for children to fit inside.

Big League Politics reported that “after alerting local and federal law enforcement about the situation and receiving no help, Veterans on Patrol rallied local volunteers together to physically dig up the site.”

The situation came to a head Sunday afternoon when, according to the group, they dug up a bloody knife, female underwear, and the plane ticket of a potentially missing girl from Seattle. The group is trying to contact the girl’s family for verification. They filmed the finding live on Facebook, and shortly thereafter, the police showed up and arrested two members of the group for trespassing.

Interestingly, the land on which the bunker was found is reportedly owned by CEMEX, a multinational building materials company based in Mexico that is a partner of the Clinton Global Initiative and partially owned by wealth management firm Bronfman E.L. Rothschild L.P.

Additionally, CEMEX received a $7 million contract from the Clinton Global Initiative, nearly two and half years after the quake, to build houses in Haiti during Clinton’s tenure as Secretary of State in 2012.

Now, here is where the connections get interesting, the CEO of Bronfman E.L. Rothschild is Lady Lynn Forester de Rothschild, who is both a member of the Council on Foreign Relations and confidante of Hillary Clinton. As we reported back in May 2016 during her presidential campaign, “Hillary Clinton attended a $100,000-a-head fundraiser hosted by none other than Lynn Forester de Rothschild, a prominent New York businesswoman, and supporter of Mrs. Clinton.” 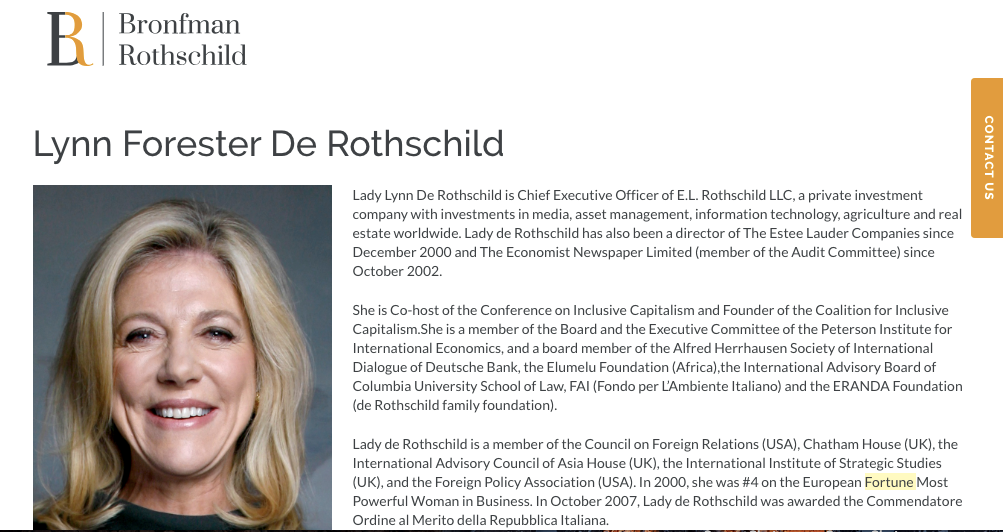 Further evidence of this close relationship between Forester De Rothschild and Clinton was revealed throughout 2016, when The Free Thought Project examined Wikileaks’ searchable archive of Clinton’s emails.

Lynn Forester de Rothschild wrote an email on April 18, 2010, in which she tells Hillary she would “love to catch up” — and “I remain your loyal adoring pal.” Clinton responds, “let’s make that happen,” and signs her response, “Much love, H.”

On September 23, 2010, Clinton emailed Lynn Forester de Rothschild (an email chain marked by heavy redaction) saying, “I was trying to reach you to tell you and Teddy that I asked Tony Blair to go to Israel as part of our full court press on keeping the Middle East negotiations going …”

Rothschild responds, thanking Clinton for “personally reaching out to us,” and adds, “You are the best, and we remain your biggest fans.”

This correspondence gives insight into how the Rothschild family works behind the scenes to use their enormous clout in the forwarding of a geopolitical agenda using their bought and paid for politicians as a means to an end.

Ironically, the Mayor of Tuscon also happens to be named Jonathan Rothschild.

Despite a lack of cooperation by law enforcement, and local media ceasing reporting on the situation, VOP is “hopeful to bring cadaver dogs on site to search the area,” reported BLP.

While it seems almost unbelievable, here is where the story gets even more convoluted and begins to potentially intersect with the NVIMX sex cult. The Chairman of the Board of Bronfman E.L. Rothschild is Matthew Bronfman, one of the heirs to the Seagram’s Liquor fortune:

Bronfman’s sister, Clare Bronfman is the Operations Director of the Clinton-connected NXIVM sex cult, while his other sister, Sara Bronfman, is a Clinton Global Initiative member.

In response to the recent arrests of NXIVM members Keith Raniere and Allison Mack, Clare Bronfman made a statement on her website denying the accusations against Raniere, and praising him and the NXIVM programs.

As TFTP  reported on April 27, the majority of the funding for NXIVM, over a reported $150 million, came from the trust funds of Seagram heiresses, Sara and Clare Bronfman.

Their involvement with Raniere allegedly began in 2002 and has been very public and controversial, with other members of the Bronfman family distancing themselves from the sisters in the press. The Bronfman family has very close ties to the Rothschild banking dynasty, with members of both families belonging to many of the same companies, including their joint financial firm, Bronfman & Rothschild.

Perhaps now you can begin to see why both the news of the bunker in Tucson — with a Rothschild mayor —  and the NVIMX sex cult’s connections to the centers of financial and political power are not featured front and center on CNN, MSNBC, FOX, etc.

Tellingly, a quick search for Allison Mack’s arrest report or charges—as reported by the mainstream media—will not yield any mention of children.

Although this extremely important detail is being left out of most mainstream reports, one of the main charges in the criminal indictment against Raniere and Mack is sex trafficking of children.

Exactly why the media is refusing to report this continues to remain a mystery.

The power-elite of society use the media to pacify and control the masses, as the lack of attention given to these startling connections reveals the depths to which the public narrative is sculpted and molded by the ruling oligarchy to keep themselves insulated from scrutiny – and the truth hidden from public view.

According to PJMedia, who reached out to local law enforcement, the site is under investigation and they are not ruling out the possibility of a child trafficking camp.

Tucson police spokesperson Officer Hawkins responded to PJM, saying, “There is an active investigation that is ongoing.” Hawkins says that while police don’t think it looks like a trafficking camp, they aren’t ruling it out. “We responded to the report of the camp on the 29th [of May] and our last visit to the area was June 2,” he said. “Cadaver dogs were sent to the area and did not find anything.”

CEMEX communicated to police that they did not want the VoP on their property and the veterans have removed themselves. VoP has been encouraging other searchers in the nearby area to find more camps that are similar, but police say they have done extensive searches and found nothing. “It appears to be a homeless camp or it could be used by border crossers, we’re not sure yet,” said Hawkins, adding that the TPD will get to the bottom of it.

While there is clearly no smoking gun, the connections in these cases most certainly warrant greater media scrutiny and investigation. If there is to be anything resembling a truly free press in the US, mass media needs to stop being afraid of offending political-elite entities such as Media Matters and the Atlantic Council, and start being the watchdog for the people!

A journalist with NBC has resigned from the network with a statement which highlights the immense resistance that ostensibly liberal mass media outlets have to antiwar narratives, skepticism of US military agendas, and any movement in the opposite direction of endless military expansionism. “January 4 is my last day at NBC News and I’d like Read More…

President Trump says he will be releasing a “very full report” on the Saudi murder of journalist Jamal Khashoggi in the Istanbul consulate within the next two days. Trump promised the report will include “who did it.” The odds are this official report won’t implicate the Saudi crown prince, as the CIA already did that in Read More…

“We are not going to stop until we see justice for Flint, but we hope to be a good example for all other cities fighting this same uphill battle.” This Michigan city is still struggling with lead-contaminated water, a struggle that reflects a hidden lead crisis brewing in cities nationwide. FLINT — For nearly three Read More…