Editor’s Note: It is important to note that we are sharing this story to reveal how Twitter is blatantly censoring ideas it does not agree with, yet that does not mean we necessarily agree with or support the accounts and or sources in this article. The only source of information that you should fully trust today is yourself. That being said, what groups such as Twitter, YouTube and Google in general are doing, and in many cases, failing to do, is very important to expose.

In the latest of a series of undercover operations targeting the mainstream media and now Social Media, James O’Keefe of Project Veritas has just dropped a new undercover video which reveals Twitter “shadow banning” and creating algorithms that censor certain ideas.

Abhinav Vadrevu:  “One strategy is to shadow ban so you have ultimate control. The idea of a shadow ban is that you ban someone but they don’t know they’ve been banned, because they keep posting but no one sees their content.”

“So they just think that no one is engaging with their content, when in reality, no one is seeing it. I don’t know if Twitter does this anymore.”

Meanwhile, Olinda Hassan, a Policy Manager for Twitter’s Trust and Safety team explains on December 15th, 2017 at a Twitter holiday party that the development of a system of “down ranking” “shitty people” is in the works:

Although Twitter presents itself as politically neutral, it’s culture behind closed doors is one of blatant censorship and systematic bias. Watch closely @jack, because you know we are. FULL VIDEO: https://t.co/Tqrd4FBr2v pic.twitter.com/DBOIcEvX8W

In the full video (see below) Twitter Content Review Agent Mo Nora explains that Twitter doesn’t have an official written policy that targets conservative speech, but rather they were following “unwritten rules from the top”:

“A lot of unwritten rules, and being that we’re in San Francisco, we’re in California, very liberal, a very blue state. You had to be… I mean as a company you can’t really say it because it would make you look bad, but behind closed doors are lots of rules.”

“There was, I would say… Twitter was probably about 90% Anti-Trump, maybe 99% Anti-Trump.”

Meanwhile, Pranay Singh reveals again just how creepy Twitter can be by digging into your profile and conversation history to determine whether or not you’re a “redneck” and therefore worthy of being banned:

“Yeah you look for Trump, or America, and you have like five thousand keywords to describe a redneck. Then you look and parse all the messages, all the pictures, and then you look for stuff that matches that stuff.”

When asked if the majority of the algorithms are targeted against conservative or liberal users of Twitter, Singh said, “I would say majority of it are for Republicans.”

Twitter has been long accused of shadow banning and manipulating various metrics of user accounts. As Paul Joseph Watson of InfoWars reported in August, 2016, Twitter was accused of suppressing tweets from then-candidate Trump in the home stretch of the US election, which some have construed as interfering:

Twitter is provably censoring Donald Trump in order to prevent him raising money for his presidential campaign.

A tweet sent out by Trump yesterday to promote his #MillionDollarMatch donation drive does not appear on Trump’s profile page nor did it appear on the feed of anyone following him.

You can check for yourself. Here is the tweet sent out by Trump yesterday and here is his main profile page – which doesn’t show the tweet. The tweet has been buried as if it never existed.

Twitter is interfering with the election. Suppressing tweets like this from appearing in feed or search
@iloveluluco pic.twitter.com/kMpfiEvrVH

A Trump tweet in which he declared that “the establishment and special interests are absolutely killing our country” was also shadow banned by Twitter back in April.

While Twitter is censoring Trump, it has repeatedly been accused of gaming its algorithms in support of Hillary. Back in February, users were irate after the social media giant appeared to censor the anti-Hillary hashtag #WhichHillary after it started trending.

Then in October, 2016, Dilbert creator Scott Adams was “shadowbanned” by  Twitter, which he noted on his blog:

This weekend I got “shadowbanned” on Twitter. It lasted until my followers noticed and protested. Shadowbanning prevents my followers from seeing my tweets and replies, but in a way that is not obvious until you do some digging.

Why did I get shadowbanned?

But it was probably because I asked people to tweet me examples of Clinton supporters being violent against peaceful Trump supporters in public. I got a lot of them. It was chilling.

Late last week my Twitter feed was invaded by an army of Clinton trolls (it’s a real thing) leaving sarcastic insults and not much else on my feed. There was an obvious similarity to them, meaning it was organized.

At around the same time, a bottom-feeder at Slate wrote a hit piece on me that had nothing to do with anything. Except obviously it was politically motivated. It was so lame that I retweeted it myself. The timing of the hit piece might be a coincidence, but I stopped believing in coincidences this year.

And in March of 2017, Twitter was caught by Ed Dowd – a politically active former BlackRock money manager who noted in early February that Twitter was both “un-retweeting” several of his politically charged posts.

In one instance, Dowd made a decidedly subversive tweet pointing out that the NSA and CIA are “wiretapping” the entire country via continuously archived data collection – a story which Wired magazine broke in 2006 and gained tremendous clarity through the acts of whistleblower Edward Snowden.

When Mr. Dowd checked his twitter feed hours after sending the tweet, he saw that it had accumulated 13 Retweets and 38 Likes. Given the subject matter, he decided to take a screenshot. Lo and behold, upon reloading the tweet five minutes later, Dowd discovered that 11 retweets had mysteriously vanished. 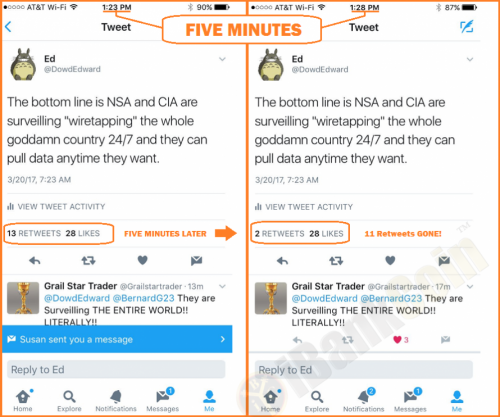 Another phenomenon Dowd noticed was that while he would gain followers throughout the day, there was a reliable “purge” of followers in the dead of night, all around the same time. He began keeping track, and though it wasn’t happening every night, it penciled out to around half a percent of his followers each time it happened, effectively capping his audience. Ed had questions; why was it almost always the same number of people? Who un-follows someone in the middle of the night? Considering most of Dowd’s followers are in North America, the un-followers were likely asleep when it was happening. The logical conclusion was that Twitter had been actively pruning Ed’s audience to limit his growth on the platform.

This isn’t the first time Twitter has throttled, censored, or banned conservatives who speak their mind. Documentarian, author, and noted Trump supporter Mike Cernovich (@cernovich) tweeted about his own fan base evaporating around the same time as Dowd began experiencing the un-follows:

Of course, only time will tell if Twitter will take steps to ban political targeting in light of these new embarrassing revelations from Project Veritas…we have our doubts.

In what could only be described as a desperate smear campaign evidencing the last vestiges of propaganda from the failed war on drugs, corporate media warped the findings of a study about cannabis-related car crashes to the point of being unrecognizable. On Tuesday, AAA’s safety foundation released a report concerning cannabis impairment and driving, which Read More…

Welcome to The Daily Wrap Up, a concise show dedicated to bringing you the most relevant independent news, as we see it, from the last 24 hours (8/22/21). As always, take the information discussed in the video below and research it for yourself, and come to your own conclusions. Anyone telling you what the truth Read More…

The phrase “Fake News” has exploded in usage since the election, but the term is similar to other malleable political labels such as “terrorism” and “hate speech”; because the phrase lacks any clear definition, it is essentially useless except as an instrument of propaganda and censorship. The most important fact to realize about this new term: Read More…