The data, made available this week by the Office of the Director of National Intelligence, provides the clearest evidence to date of how information accidentally collected by the NSA overseas about Americans was subsequently searched and disseminated after President Obama loosened privacy protections to make such sharing easier in 2011 in the name of national security. A court affirmed his order.

The revelations are particularly sensitive since the NSA is legally forbidden from directly spying on Americans and its authority to conduct warrantless searches on foreigners is up for renewal in Congress later this year. And it comes as lawmakers investigate President Trump’s own claims that his privacy was violated by his predecessor during the 2016 election.
In all, government officials conducted 30,355 searches in 2016 seeking information about Americans in NSA intercept metadata, which include telephone numbers and email addresses. The activity amounted to a 27.5 percent increase over the prior year and more than triple the 9,500 such searches that occurred in 2013, the first year such data was kept. 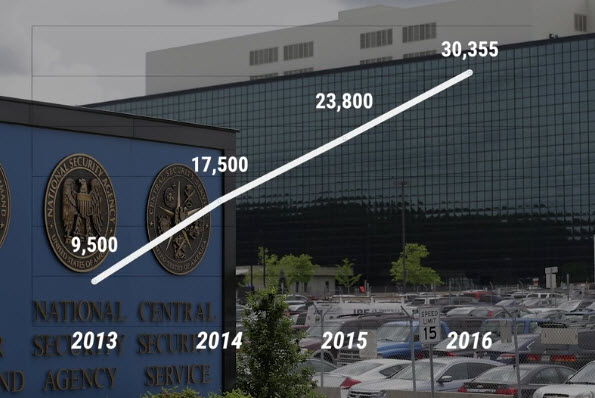 The government in 2016 also scoured the actual contents of NSA intercepted calls and emails for 5,288 Americans, an increase of 13 percent over the prior year and a massive spike from the 198 names searched in 2013.

The searches ultimately resulted in 3,134 NSA intelligence reports with unredacted U.S. names being distributed across government in 2016, and another 3,354 reports in 2015. About half the time, U.S. identities were unredacted in the original reports while the other half were unmasked after the fact by special request of Obama administration officials.

Among those whose names were unmasked in 2016 or early 2017 were campaign or transition associates of President Trump as well as members of Congress and their staffers, according to sources with direct knowledge.

The data kept by ODNI is missing some information from one of the largest consumers of NSA intelligence, the FBI, and officials acknowledge the numbers are likely much higher when the FBI’s activity is added.

“There is no doubt that there was a spike in the requests to search for Americans in the NSA database,” a U.S. official familiar with the intelligence told Circa, speaking only on condition of anonymity because of the sensitive nature of the data.

“It’s simply easier for people to make requests. And while we have safeguards, there is always concern and vigilance about possible political or prurient motives that go beyond national security concerns.”

A top lawyer for the American Civil Liberties Union, which has long raised concerns about the NSA’s ability to spy on Americans, said the rise in searches is a troubling pattern that should concern members of both political parties because it has occurred with little oversight from the courts or Congress.

“This data confirms that there is a lack of acknowledgment that information is being specifically and increasingly mined about Americans for investigations that have little or nothing to do with international terrorism,” she added.

The ACLU’s concerns were heightened by the release last month of a previously classified Foreign Intelligence Surveillance Court document that revealed that then NSA has a “potentially very large and broad” collection of data on U.S persons that was never intended under the law.

U.S. intelligence officials confirmed the growth in queries about Americans’ data held by the NSA but declined to explain the reasons, except to say the requests for access grew after intelligence agency officials became more comfortable with Obama’s 2011 order.

They stressed the NSA has strict rules in place to govern when searches for Americans are being conducted and when a U.S. person’s identity can be unmasked. They also hailed the release of the new data as a step toward greater transparency.”

As a community, we look for new ways to enhance transparency,” said Alex Joel, who leads ODNI’s Office of Civil Liberties, Privacy, and Transparency. “Our goal is to provide relevant information, distilled into an accessible format. This year’s report leans forward in that direction, providing significant information beyond what’s statutorily required, and reflecting our concerted effort to enhance clarity.”

The data emerges just weeks after Circa first reported that Obama substantially eased the rules starting in 2011 allowing for government officials, including political appointees, to unmask and obtain information about Americans in NSA intercepts.

The easing allowed appointees like former National Security Adviser Susan Rice to request and review the unmasked names of Trump campaign or transition officials intercepted in foreign conversations late last year. And it also resulted in the frequent unmasking of members of Congress and their staff, as often as once a month, Circa reported.

The NSA is allowed to spy on foreign powers without a court warrant under Section 702 of the Foreign Surveillance Intelligence Act but is forbidden from targeting Americans.

For years, the NSA was required to follow strict rules to protect the accidental intercepts of Americans from being consumed by other government agencies. The rules required a process known as minimization, where the identity of an intercepted American is redacted or masked with generic references like “American No. 1.”

But the intelligence community fought hard over the last decade starting under President George W. Bush and continuing under Obama to gain greater access to NSA intercepts of Americans overseas, citing the growing challenges of stopping lone wolf terrorists, state-sponsored hackers, and foreign threats. Obama obliged with a series of orders that began in 2011, moves that were approved by the FISC.

Today, the power to unmask an American’s name — once considered a rare event in the intelligence and civil liberty communities — now resides with about 20 NSA officials.

The FBI also has the ability to unmask Americans’ names collected under FISA to other intelligence professionals and policymakers, though it hasn’t provided data on its frequency.

And the justification for requesting such unmasking can be as simple as claiming “the identity of the United States person is necessary to understand foreign intelligence information or assess its importance,” according to a once-classified document that the Obama administration submitted in October 2011 for approval by the Foreign Intelligence Surveillance Court.

That memo laid out specifically how and when the NSA could unmask an American’s identity.

But numerous civil liberty experts, including the ACLU’s Guliani, say such representations aren’t accurate because the NSA accidentally collects so much information on Americans and then shares it after the fact. The FBI, for instance, regularly queries the NSA database and the declassified court document in March said “there is no requirement that the matter be a serious one nor that it have any relation to national security.”

“I think it shows that the facade that government gives that these programs are just targeted at foreigners is just that, a façade,” Guliani told Circa. “The reality is we have an invasive surveillance program and the data we have shows the impact on Americans is quite substantial.”

A federal judge in Washington has ruled in 2013 and again in 2015 that the NSA collection of data on Americans violates the 4th Amendment of the Constitution, but that ruling is winding its way through appeals. The FISA court, meanwhile, continues to support the intelligence community’s continued use of the data, as recently as in 2015.

Circa is in the process of filing what’s called a “Mandatory Declassification Review,” the legal process that asks the government to declassify certain information.

Authored by John Solomon via Circa.com

Machine Mania In The Marketplace: How Computers Came To Own The World

With 60% of stocks now being traded by bots that fake each other out in order to create buying opportunities, stock exchanges have lost their connection to the reason markets are created in the first place. The exchanges no longer exist as places for people to buy and sell ownership in a corporation. They exist Read More…

US, Israel, And Saudi Arabia Planned Overthrow Of Syrian Government In 2006

Welcome to The Daily Wrap Up, a concise show dedicated to bringing you the most relevant independent news, as we see it, from the last 24 hours (10/3/19). As always, take the information discussed in the video below and research it for yourself, and come to your own conclusions. Anyone telling you what the truth Read More…