One of the most important factors holding back the PizzaGate investigation has been the absence of a victim willing to speak on the record. Recently, an alleged victim of James Alefantis has decided to speak out about the abuse that he claims was endured while under the employment of Mr. Alefantis at Comet Ping Pong in Washington DC. 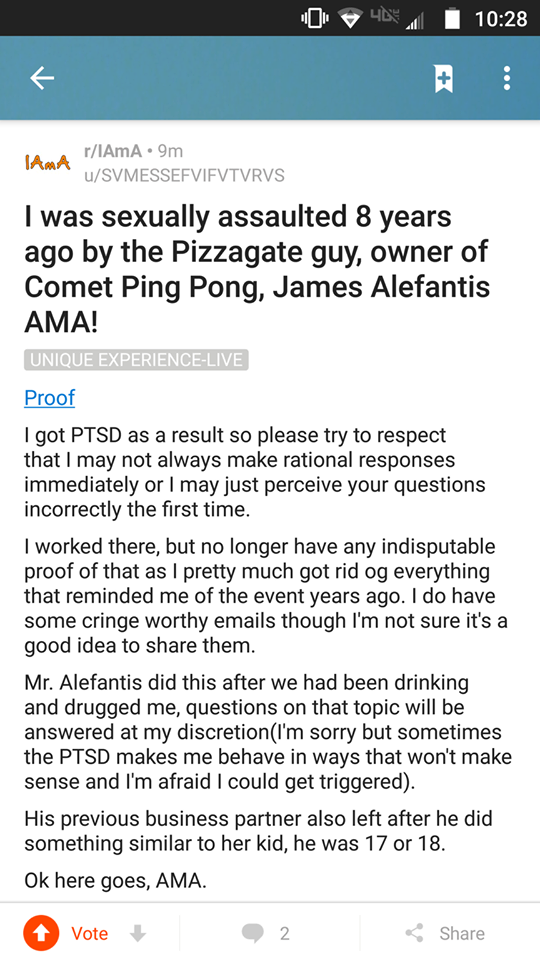 These allegations are as of yet unverified, yet it becomes increasingly clear that this investigation is not going away. From Ben Swann recently releasing a video showing the massive institutional failure surrounding this very real investigation, to WikiLeaks tweeting about PizzaGate, this case is beginning to show the signs of actually materializing into a full-blown official investigation. As many in powerful positions have stated, there are officials who are already on this case, and believe it to be extremely legitimate.

It is also important to note that WikiLeaks has released millions of documents, none of which(not a single one) has yet to be proven false, which puts a lot of weight on their tweet about this topic.

And we must remember that President Trump’s own National Security Advisor tweeted about this investigation; as well as his son.

Until #Pizzagate proven to be false, it’ll remain a story. The left seems to forget #PodestaEmails and the many “coincidences” tied to it. https://t.co/8HA9y30Yfp

When considered alongside the tweets made by Andrew Breitbart before this story was publicly known–prior to his suspicious death, and that of his coroner who died shortly after declaring Andrew’s cause of death a heart attack which is widely disputed–it’s all but impossible to continue telling oneself that PizzaGate is a wild “conspiracy theory.”

I’ll admit that I inspired the Oslo killer, @EricBoehlert, if you admit you gargle with John Podesta’s DNA.

Early on did John Podesta imagine his baby @mmfa would be covering up for underage sex slave ops & H8 crimes against blacks?

The more this story is spread, the more those being kept silent by fear will gain the courage to come forward. Do your part, and don’t allow yourself to be cowed by their attempts to stifle the truth and control your perception. This very well could be the thread that unravels the cabal … all we must do is continue to pull.

Faced with fines in Europe, Google will enforce four new steps to identify “terrorist-related content” on its YouTube subsidiary. “We are working with government, law enforcement and civil society groups to tackle the problem of violent extremism online. There should be no place for terrorist content on our services,” writes Kent Walker, general counsel for Read More…

The Friendly Mask Of The Orwellian Oligarchy Is Slipping Off

Gina Haspel has been confirmed as America’s new CIA Director, fulfilling her predecessor Mike Pompeo’s pledge to turn the CIA into “a much more vicious agency”. “Bloody Gina” has reportedly been directly involved in both torturing people and destroying evidence of torture in her long and depraved career, which some say hurts the CIA’s reputation. Others say it just makes it more honest. Read More…

Manufactured Civil Unrest And Regime Change: Is America Next?

The video below shows a concise history of the CIA creating unrest and overthrowing governments around the world. Or “regime maintenance,” perhaps? “These revolutions are portrayed in the western media as popular democratic revolutions, in which the people of these respective nations demand democratic accountability and governance from their despotic leaders and archaic political systems. Read More…