The DEA considers hemp to be a dangerous substance and it’s still classified as a schedule I drug, alongside heroin and ecstasy, even though the plant contains almost no THC and has no psychoactive effects. Many believe this classification is the result of the oil industry’s grip on the legislative process in America, because hemp is one of the most viable alternatives to plastics, fuel and other building materials, in fact, it used to be an important domestically produced crop, and it even contains extraordinary health benefits.

“Hemp is the only plant that can feed you, house you, clothe you and heal you.” [Source]

The Tiny House Movement is Growing

As a response to unbridled consumerism and desire for infinite growth inherent in our economy, some are finding that satisfaction in life is not dependent on having and maintaining the ‘American Dream.’ Tiny houses are becoming widely popular, especially so for those not interested in participating in the debt economy which is driven by banks who’ve used the mortgage industry as a means of looting the nation.

“The tiny house movement is one of the latest innovations in personal freedom from an overly consumeristic and a debt-driven society.” ~Isaac Davis

In Bellingham, Washington, a local grandmother, Pamela Bosch, is making news for combining the philosophy of tiny home living with the growing innovation in building materials and practices made out of hemp. In what she considers a pioneering experiment in sustainable living, Pamela’s organization Highland Hemp House is using hemp imported from Europe to make model energy and resource efficient homes.

The planet we live on is a rapidly changing environment that demands that human beings become more conscious of our living arrangements.  Smaller spaces that require less energy are part of the emerging response to inefficient buildings, as are eco-villages with shared resources. Net Zero houses that produce the energy they will consume and permaculture designs that are mindful of the synergies of systems that support life in place.

So, as the Hemp House was envisioned, the role of the single family home in the setting of a small urban environment was contemplated.  Can this ever ubiquitous bastion of American life transition to a future that supports a more integrated humanity?  How should our contemporary castles of middle-America hold the spaces or be the places where we learn to thrive in balance with our living environment?  How can our living spaces support our adaptation to a less consumptive way of living that is also of higher quality? [Source] 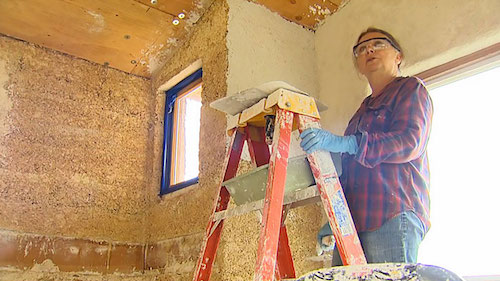 Pam was recently featured on Seattle’s K5 News showing off the tiny home she is building by herself, proving that anyone can do it, so long as they have the desire to be a part of our sustainable future.

“We need to be building this way,” Bosch said. “We should have as many buildings as we can that are built out of a renewable resource that sequesters carbon, that is healthy and if it were legal would be very affordable. It’s an agricultural waste product we’re using.”

Hemp can be used for soil remediation, biofuels, plastic composites, organic body care and health foods, but until it’s regulated, farmers in Washington would need permission from the DEA. [Source]

Prohibition against hemp is finally cracking, however, and some states are allowing farmers to cultivate the precious crop, and as technology and innovation move forward together, many ingenious people are finding excellent new uses for this cash crop, including the making of building materials.

“Alternative economies, open source governance, local food production, non-polluting energy generation, holistic health maintenance, to name a few of the many movements, are adaptive responses to the challenges of bringing human nature into alignment with Nature in balance.” [Source]

Activism Without Inner Work Is Impotent

Have you ever known someone who’s intensely interested in helping people, but is so neurotic and unskillful that they mostly just make things worse? “Stop!” you’ll find yourself wanting to yell at such people. “Stop helping! Go help yourself!” That’s how I see most political activism today. So many well-intentioned people who want to help, Read More…

The Secret House Memo And “Rescue From Above”

The theme: Something starts off as fairly reasonable, and then is blown out of all proportion. First, a brief recap on the secret House memo—not available to the press or public—and the reaction to it. Purportedly, the memo will reveal that Democrat operatives—some inside the FBI and the DOJ—feloniously used a fake and fabricated “Trump Read More…

US Blames Iran For Impoverishing Civilians While Prepping Further Sanctions

The United States government is preparing to implement an additional level of sanctions against Iran for its refusal to meet a dozen demands that are so absurdly unreasonable that they have been called a regime change policy in all but name. The sanctions which have already been implemented have already badly hurt the Iranian economy, the sting of Read More…