For roughly the last decade and a half, the NSA has been caught in lie after unscrupulous lie. Every time they are caught spying on Americans, the secret agency first denies it — then justifies it. The NSA has now been caught again. And, again, they denied it and are now justifying it.

This time, their unscrupulous spying involves a shadow “social network” that combs data from all social networks and your online data to create a graph of everyone and everyone they know. If you’re wondering where your invite to join this shadow network came from, you never got it. However, you’ve already joined.

NSA even has a website for this network on which they gladly display all the information they collect. It’s called GETPRSM and it’s scary. While it looks like an Orwellian satire gone wrong, the site is very real and the NSA has no problem admitting it.

While they originally claimed this information was only being collected on foreigners, a shift in their policy showed that this was not the case.

According to a scathing report in the NY Times, the NSA no longer cares if the data they collect is foreign as they no longer check for these constraints.

The spy agency began allowing the analysis of phone call and e-mail logs in November 2010 to examine Americans’ networks of associations for foreign intelligence purposes after N.S.A. officials lifted restrictions on the practice, according to documents provided by Edward J. Snowden, the former N.S.A. contractor.

The policy shift was intended to help the agency “discover and track” connections between intelligence targets overseas and people in the United States, according to an N.S.A. memorandum from January 2011. The agency was authorized to conduct of every “large-scale graph analysis on very large sets of communications metadata without having to check foreignness” e-mail address, phone number or other identifier, the document said. Because of concerns about infringing on the privacy of American citizens, the computer analysis of such data had previously been permitted only for foreigners.The agency can augment the communications data with material from public, commercial and other sources, including bank codes, insurance information, Facebook profiles, passenger manifests, voter registration rolls and GPS location information, as well as property records and unspecified tax data, according to the documents. They do not indicate any restrictions on the use of such “enrichment” data, and several former senior Obama administration officials said the agency drew on it for both Americans and foreigners.

All this data of both foreigners and American citizens is then entered into a graph as seen below. 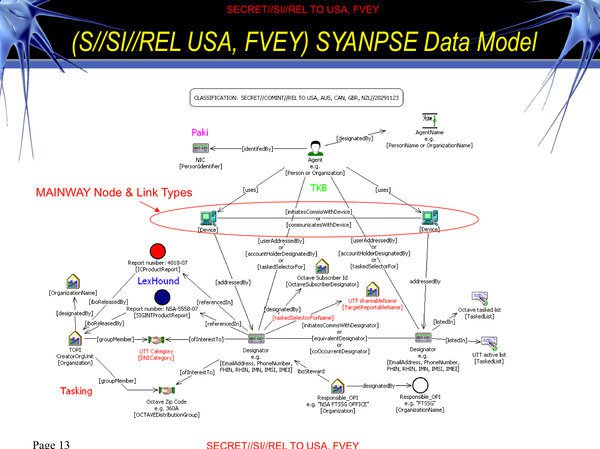 As Techdirt explains, if all of this sounds familiar, it’s almost exactly what the feds tried to setup in 2002 with the Orwellian name Total Information Awareness. Except that time (right after 9/11, when you’d think the public would be at its most receptive to such programs), as word got out about the program, the public rightly flipped out, and we were told the program was shuttered. Except, as some have been arguing for years, it was never shuttered, it was just rebuilt in secret.

Again, after they first denied it, they are now justifying it.

An agency spokeswoman, asked about the analyses of Americans’ data, said, “All data queries must include a foreign intelligence justification, period.”

“All of N.S.A.’s work has a foreign intelligence purpose,” the spokeswoman added. “Our activities are centered on counterterrorism, counterproliferation and cybersecurity.”

As Techdirt explains, that’s no limitation at all. In fact, such a rule is meaningless. We already know that the NSA gets every telephone record handed over because they claim it’s “necessary” to “connect the dots” on foreign terror plots. And, similarly, now they’re arguing that they can look at anything else so long as they claim that there’s a “foreign intelligence justification.” That means they have no limits. They just have to come up with some wacky reason to claim that so-and-so might have foreign connections that are important to know about, and voila, their life is open for the NSA to dig in, all without any oversight or a warrant.

Prior to 9/11, when I was an intelligence operator reporting to NSA, if we intercepted friendly chatter, i.e. Americans, we were to scroll on immediately. If we were caught listening to that chatter, we faced a prison sentence under United States Signals Intelligence Directives. An act that was once illegal — has now ominously become the norm.

As the war on terror continues, so does the erosion of our rights and privacy. As the old adage goes, those who would trade their freedom for security will get neither — and as the warrantless state spying machine grows unchecked, Americans are quickly fulfilling that prophecy and finding themselves without freedom or security.

Since the moment the polls closed on November 8, the Western establishment media and their partners in the State and Corporate classes have been working overtime to embed another propaganda-filled narrative deep into the minds of the American public. This operation involves President-elect Donald Trump, the recent fake news meme, and Russia. The goal of the Read More…

Welcome to The Daily Wrap Up, a concise show dedicated to bringing you the most relevant independent news, as we see it, from the last 24 hours (4/4/19). As always, take the information discussed in the video below and research it for yourself, and come to your own conclusions. Anyone telling you what the truth Read More…

Welcome to The Daily Wrap Up, a concise show dedicated to bringing you the most relevant independent news, as we see it, from the last 24 hours (6/26/19). As always, take the information discussed in the video below and research it for yourself, and come to your own conclusions. Anyone telling you what the truth Read More…