I don’t own a TV. I don’t watch the news. I don’t pay attention to any of the bread and circuses. I’m too busy improving myself and those around me.

But word on the street is that it’s getting close to election time here in ‘merica.

People ask me what I think about Donald Trump running for president or whatever other WWE-like political stage show is going on. This inevitably leads to me saying “I’m not going to vote.”

Now before you fall off of your high horse in astonishment, let me explain… I choose not to vote, not out of ignorance, nor out of apathy (actually quite the opposite), but out of noncompliance with a broken, fundamentally corrupt and laughably ineffective system.

C’mon, do you really think the votes are counted fairly after fiascos like the blatantly manipulated “Florida recount” of 2000? There’s obviously foul play going on, and digitizing the voting process makes it even easier to rig the game. It’s not even a popular vote anyway. People’s votes (supposedly) go to selecting members of the Electoral College, who then elect the president. (Another safeguard to make sure that only “selected” candidates are voted in?)

Isn’t it ironic that most people feel like their opinion is negligible when it comes to most things? But in terms of voting (which is a blatantly rigged game), they fall for the fairy tale that their vote counts?

When I tell people I don’t vote, I get two predictable reactions…

Other people say, “If you don’t like it, then leave.” Well, America was founded on the principle that the people have the right to criticize the government, and the right to overthrow it if it becomes tyrannical. Then there’s that little freedom of speech thing that just so happens to be the first amendment. If you live in a country where you can’t criticize the government, you’re in a 1984-like nightmare. I’d rather not slide down that slippery slope.

“To criticize one’s country is to do it a service …. Criticism, in short, is more than a right; it is an act of patriotism – a higher form of patriotism, I believe, than the familiar rituals and national adulation.” – U.S. Senator J. William Fulbright

The Two Main Reasons Why I’m Not Voting

1. The System is Broken

The entire political system in the US is basically a branch of the big banks. The vast majority of senators are lap dogs for big corporations (lobbying is just a fancy way of saying bribery). And the entire hierarchy is designed so that the most obedient to those interests rise to the top. Anyone who tries to bring about any real change from within it is either silenced into submission or converted into another spineless drone dancing the puppet master’s dance.

If you can’t see that there’s a massive conspiracy at hand, you’re in deep, deep denial. This is a call for you to wake up.

Here’s just the tip of the iceberg of deceit:

Regarding the rigging of the voting process itself:

Can you get any more dysfunctional and deceptive? Everything that’s projected at us is one big, theatrical lie. To even give such an institution legitimacy is an insult to our intrinsic nature as sovereign beings.

Don’t get caught up in “what’s wrong” though. Running around like a fearful, paranoid conspiracy theorist won’t help. You just need to be aware of the forces holding you back in order to transcend them.

We must focus on building a better system rather than trying to repair a hopelessly broken one.

If a glass breaks, do you waste your time trying to glue all of the pieces back together? Of course not. You get a new glass!

“The secret of change is to focus all of your energy, not on fighting the old, but on building the new.” – Dan Millman

Is Elon Musk trying to change the auto-industry from the inside? Is he trying to take over Ford or Chevy? No, he’s creating better alternatives (through Tesla Motors) that are rendering the traditional technologies futile.

And really, all of the bullshit legislation and asinine topics of discussion are akin to switching chairs around on the Titanic. We need to change the fundamental paradigms which western society is based upon. We need a monetary system that does not funnel wealth into the hands of a few. We need energy that creates abundance as opposed to limitation. We need to embrace love, as opposed to being conditioned from cradle-to-grave with fear.

2. The Power of Noncompliance

For some reason, most Americans have been conditioned to believe that peaceful noncompliance isn’t an effective driver of change. Quite the opposite is true. This false belief has been propagated because, when used properly, it’s an immensely effective force.

Peaceful resistance is the only way to create positive, lasting change. Noncompliance is the kryptonite of any control system.

No law, no system, no government can be implemented unless people COMPLY with it. Any manifestation of a control system cannot exist without our acquiescence.

“Non-violence is the greatest force at the disposal of mankind. It is mightier than the mightiest weapon of destruction devised by the ingenuity of man.” – Mahatma Gandhi 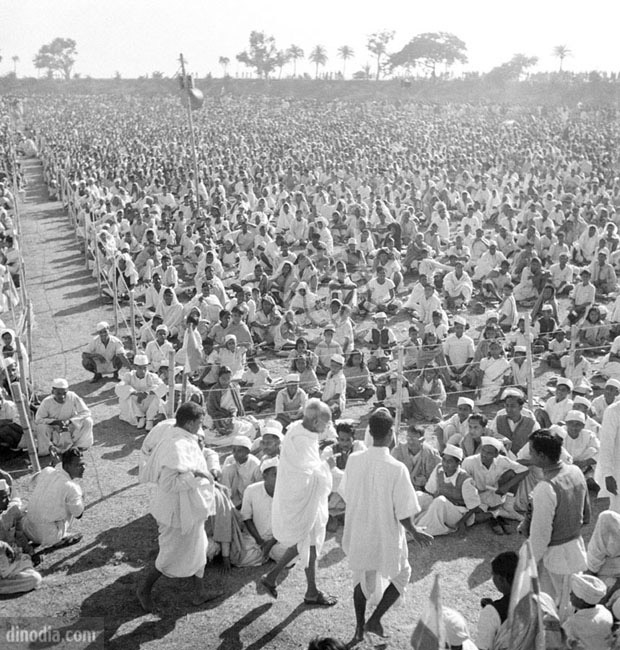 Society is overwhelmingly shaped by acts, not laws. People are inspired through the heart, not necessarily through documents and signatures. What law did Gandhi pass? What law did MLK pass? Did Rosa Parks go through a legislative process? Hell no. She practiced peaceful noncompliance by refusing to sit in the back of the bus. And it was a huge moral victory.

We can also look at the events that have shaped society in more negative ways. Look at 9/11. Many now believe this was a false-flag attack engineered to instill fear within the population (along with being an excuse to occupy the Middle East). Ever since that tragic day, Americans have been literally programmed with fear.

We need to take action to spark positive change, along the lines of Gandhi and MLK.

In the phenomenal novel The Fifth Sacred Thing, a utopian(ish) society neutralizes the invasion of a dystopian society through noncompliance. The utopian society had built better alternatives in every aspect of living. When the armed invaders came, they were met with peaceful noncompliance. At first, some were killed for not obeying orders. But eventually, the invading army recognized that the place they had invaded provided a better life than they could have imagined back home. The strategy of peaceful resistance caused the hierarchy of the violent invaders to implode from within.

You can’t fight fire with fire. It must be put out with water. Noncompliance is that water.

What would happen if the majority of the population refused to vote? Not out of apathy, but out of noncompliance with a system that they don’t agree with. And letting it be known, emphatically, on top of that. (See the “call to action” at the bottom of this article to do just that.) Everyone would be forced to take a long, hard look and question even the most fundamental beliefs that the government is based upon. When noncompliance hits a tipping point, the established system of government would have no choice but to be uprooted and rebuilt from the ground up.

“No snowflake in an avalanche ever feels responsible.” – Voltaire

It’s about time we started an avalanche of positive change.

Change starts from within. There must first be internal change for there to be any real, lasting external change. That’s why Gandhi said, “Be the change we wish to see in the world,” not “Hope someone else will come along and change things for you.” (Which is the trap most Americans have fallen into.)

We’ve been focusing all of our energy on external authority figures for so long that we can’t even fathom what the world would look like if we all stepped into our inherent power. And that is exactly what needs to happen for any real change to take place.

Stop focusing on what, deep down, you know to be illusory and embody the change.

“Our deepest fear is not that we are inadequate. Our deepest fear is that we are powerful beyond measure. It is our light, not our darkness that most frightens us. We ask ourselves, ‘Who am I to be brilliant, gorgeous, talented, fabulous?’ Actually, who are you not to be? You are a child of God. Your playing small does not serve the world. There is nothing enlightened about shrinking so that other people won’t feel insecure around you. We are all meant to shine, as children do. We were born to make manifest the glory of God that is within us. It’s not just in some of us; it’s in everyone. And as we let our own light shine, we unconsciously give other people permission to do the same. As we are liberated from our own fear, our presence automatically liberates others.” – Marianne Williamson

We hold the key to change, and it lies within.

We shape society based on our daily actions, not by hoping someone else will come and save us.

And that’s why I’m not voting.

We Know What The Problem Is, And We Have The Solution. So What Is Trump Doing?

Luke Rudkowski of We Are Change goes over some of the perceived threats against the western world, and the root of the problem in great detail, covering both foreign policy and geopolitical news. It should be clear to most that there are quite a few very serious, relevant and important topics that mainstream media refuses to Read More…

Today, the West Virginia House unanimously passed a bill that would significantly expand the state’s hemp licensing program, opening the door for anybody in the state to produce or process industrial hemp for commercial purposes. Final approval would set the foundation to end federal prohibition in practice. Del. Jeff Eldridge (D-Alum Creek) and Del. Jim Butler (R-Henderson) Read More…

The current Tom DeLonge disclosure happened in a most curious way. Suddenly, several high-level ex-CIA spooks and Pentagon insiders joined Blink-182 rocker DeLonge’s team, a start-up company called “To the Stars Academy.” One of the team members, Luis Elizondo, rolled out information on a UFO Pentagon program he headed up. But Elizondo, for years, ran Read More…