Early this Wednesday morning Israeli warplanes launched a number of airstrikes on southern and Western Gaza, breaking a ceasefire that had ended an 11-day round of fighting between Palestinian armed groups and the Israeli military.

The Gaza-Israel ceasefire, which had gone into effect at 2AM on the 21st May, was broken after a decision made by Naftali Bennett, the new Israeli Prime Minister, during his second day in office. Also on Tuesday, Bennett’s government did not act to stop an extremist settler march which paraded through the streets of Jerusalem.

What do Israeli police do? Protect the racists and attack Palestinians.

The equivalent is racists in the US doing this in a black neighbourhood. pic.twitter.com/5Ku7akzU53

Naftali Bennett’s coalition partner Yair Lapid condemned the chants of “death to Arabs” by the fascist group of settlers, but the Prime Minister himself remained completely silent, despite the fact that settlers had even burnt his photo and chanted against him. The reason why the settlers, belonging to Kahanist groups, came out in such staunch opposition to Bennett, is due to his acceptance of Israeli political parties which are not considered as left-wing.

One of the reasons for last month’s escalation, causing what some called the “11-day war” on Gaza, was the extremist settler march planned to enter the al-Aqsa Mosque compound. The Israeli government reportedly sent a communication to Hamas through Egyptian contacts, informing them that the course of the settler march was changed to not include storming al-Aqsa. This decision in and of itself was considered by many Israeli’s as a confirmation that Hamas had been able to effectively achieve a level of deterrence with Israel from the battle branded by Gaza’s ‘Joint Room’ of resistance factions as Sayf al-Quds (Sword of Jerusalem).

However, it was clear that Naftali Bennett was more than willing to follow in the path of his predecessor, Benjamin Netanyahu, in allowing the fascist settlers to enter the Arab quarters of Jerusalem’s old city and the Bab al-Amud (Damascus Gate) area. In order to facilitate the entry of settlers into the area, from the early morning Israeli occupation forces had set up barricades to keep Palestinians out of the area, beating and arresting anyone who protested.

The equivalent of the settler march in the United States would be if white supremacists had stormed a majority black neighborhood and shouted “death to blacks”, calling for their ethnic cleansing, as US police attacked black counter-protesters, protecting the white supremacists. Then imagine that the US government directly supported in words, laws and financially, those same white supremacists to take over the homes of black residents in that area. This would cause an instant unquestionable outrage in Western countries, but because Palestinians have become so dehumanized, and Israeli’s are always assumed to be the reasonable ones, people are trained to try and balance this equation.

Coinciding with the settler “death to Arabs” march in Jerusalem were Palestinian protests in the city, during which 33 Palestinians were injured by Israeli occupation police forces. This, as demonstrations also took part in the West Bank and Gaza Strip.

Interestingly, however, in the reports issued by Western media, apparently there was never any ceasefire that was broken by Israel, when they did report upon the bombing of the Gaza Strip. The BBC came out with a headline reading “Israel strikes in Gaza after incendiary balloons”, followed closely by the Guardian which wrote “Israel carries out Gaza Strip airstrike after militants release incendiary balloons”. Extraordinarily, the ceasefire just vanished from existence and the balloons allegedly released by Gazan youths – carrying flaming objects – were the provocation. This is what the war crime of “collective punishment” looks like. 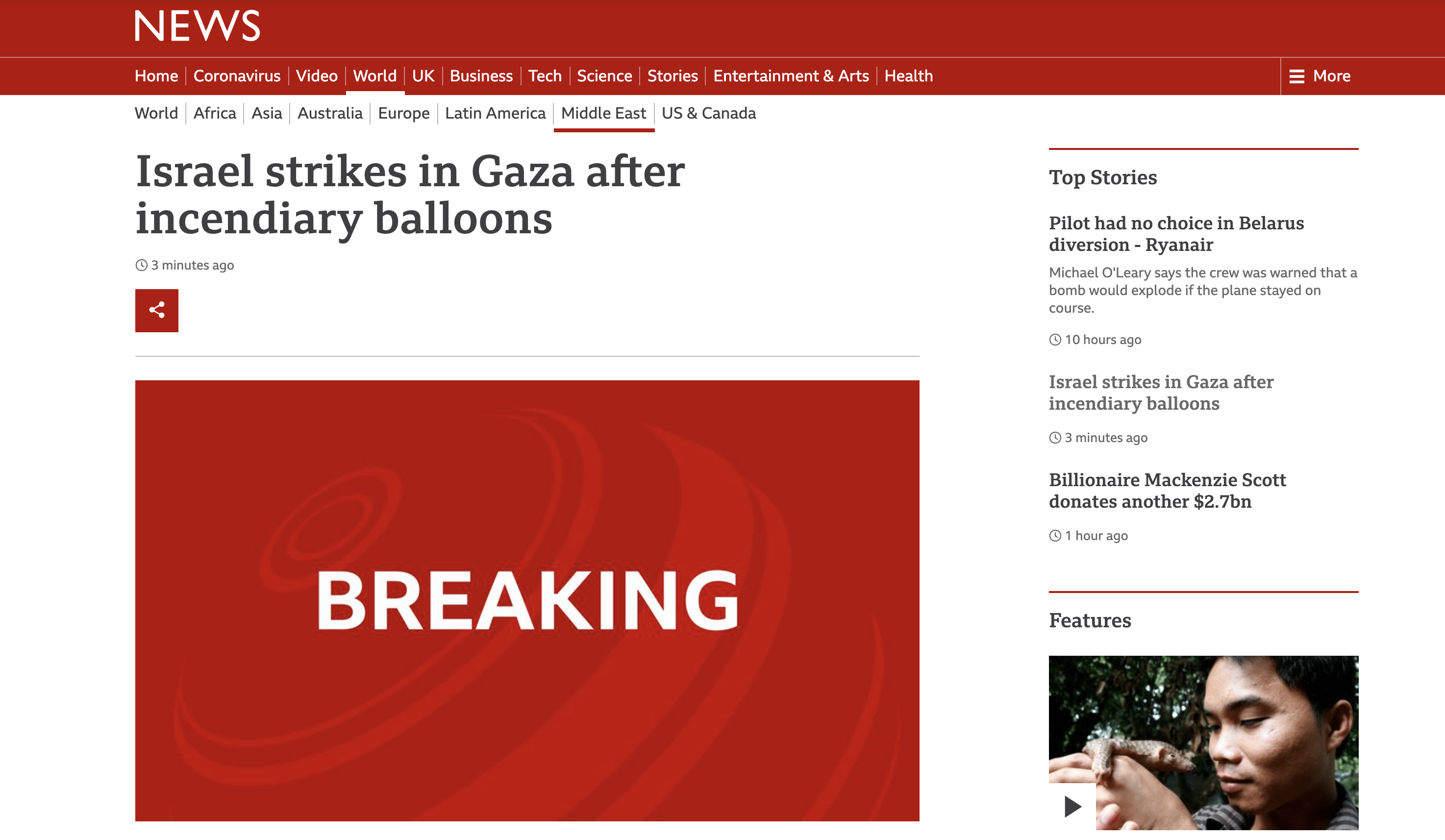 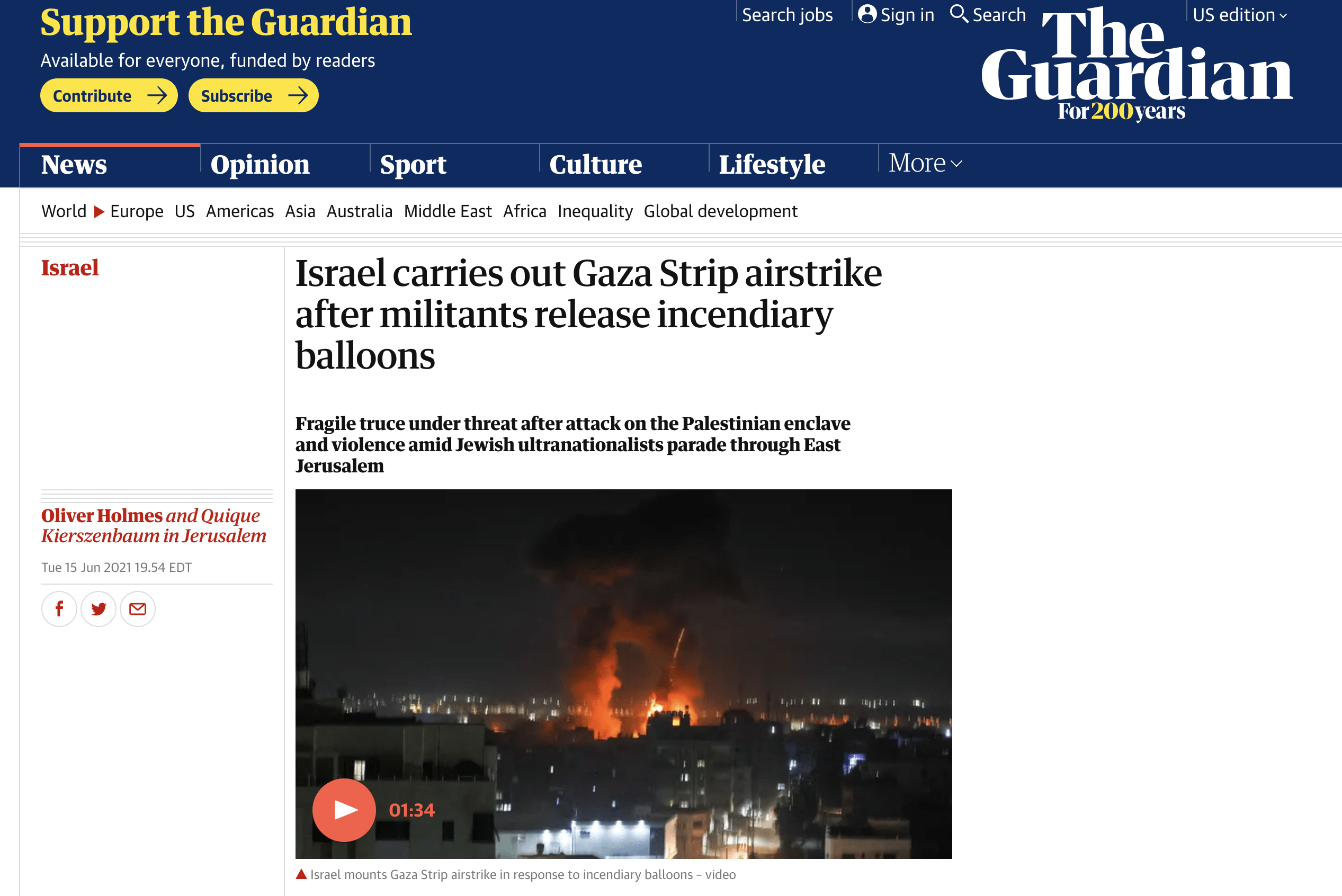 It is unfortunately always the case that no matter what Israel does, even when Hamas does not fire rockets, the story always starts with “but the Palestinians”. To say that a valid response to a balloon with a flaming object being sent to land and perhaps start a fire in lands stolen from Palestinians in Gaza, is an F-16 dropping tons of explosives on one of the most densely populated civilian areas on earth (half of which are children) is a tad ridiculous to say the least. That is kind of like your neighbor flicking a cigarette in your back garden and so you decide to blow up his home with a ton of C-4.

Hamas did not immediately respond to either the Israeli provocations in Jerusalem, nor the airstrikes on the Gaza Strip, which could indicate they are sitting back and calculating their next move to strategically outmaneuver Israel. If and when Hamas, along with the other armed groups in Gaza, do respond, it will likely again deteriorate into another scenario like the one seen last month or perhaps even bigger.

So far it seems that Naftali Bennett is attempting to pose as a strongman and hold his promise that a balloon from Gaza must be met with airstrikes, this indicates weakness and irrationality on Israel’s behalf, but also that he will be very similar to Netanyahu in this respect. Netanyahu is also still not out of the picture. Now heading the Israeli opposition, it is still a possibility that he will manage to crawl back to power, and that may come as a result of Bennett’s hawkishness breaking up Israel’s current government.

Posted on May 26, 2017 Author Darius Shahtahmasebi

While Donald Trump was in Riyadh, raving incessantly about the over-hyped Iran threat, Iranian foreign minister Javad Zarif was trolling America’s foreign policy establishment. He advised Trump to discuss with Saudi Arabia how to avoid another 9/11 atrocity rather than making baseless claims against Iran. Zarif said: “[Trump] must enter into dialogue with them [the Saudis] Read More…

There is ample talk, particularly of late, about the threats posed by social media to democracy and political discourse. Yet one of the primary ways that democracy is degraded by platforms such as Facebook and Twitter is, for obvious reasons, typically ignored in such discussions: the way they are used by American journalists to endorse factually Read More…

“Misdirected” US Drone Strike in Somalia Kills 22, Including Civilians

In what the US is calling a “misdirected” airstrike, some 22 Somali citizens and soldiers were killed by a US missile fired from a drone intended to take out al-Qaeda affiliated al-Shabab militia members. According to the BBC, the airstrike may have been a ruse by one region in Somalia seeking to settle scores with Read More…