As more information about the downing overnight of a Russian reconnaissance plane by aging Syrian antiaircraft weapon becomes available, the Russian Defense Ministry has issued a shocking claim that will undoubtedly ratchet up tensions between Russia and Israel. While Russia had previously blamed Israel for the downing of the plane, which resulted in the deaths of 15 Russian servicemen, the MoD is now saying that Israel intended to use the Russian plane as “cover” during the attack.

According to the Russian military, the plane was shot down while responding to an attack by four Israeli F-16s on Syrian government positions in the coastal town of Latakia. The attack was the latest of some 200 attacks launched by the Israelis over the past 18 months with the stated aim of preventing Iran from expanding its foothold in war-torn Syria.

Israeli jets flew over the Mediterranean to launch the attack, only giving Russia a minutes’ notice via a shared hotline before commencing the strike. This allowed the Russian military no time to pull its planes and personnel from the line of fire.

Now, a spokesman for the Russian Ministry of Defense is saying that Russia believes the attack was a set-up, with Israeli hoping to use the Russian plane as badly needed cover from Syrian air defenses. Since the Russian plane had much higher profile than the Israeli plane, the Syrian defense systems would naturally latch on to the Il-20.

“The Israeli pilots used the Russian plane as cover and set it up to be targeted by the Syrian air defense forces. As a consequence, the Il-20, which has radar cross-section much larger than the F-16, was shot down by an S-200 system missile,” the statement said.

Russian Defense Minister Sergey Shoigu discussed the incident with his Israeli counterpart, Avigdor Lieberman, on Tuesday.  He conveyed Moscow’s anger about the incident and its blaming of the Israeli military for purportedly setting up the Russian plane to be shot down by aging Syrian air defenses.

Russia said a French Navy frigate, the Auvergne, was in the area of the attack along with the downed Russian Il-20 plane during the Israeli operation.

In a statement, the Russian military accused Israel of not leaving Russian forces enough time to respond to their warning about the attack. A search-and-rescue operation is underway, but so far only body parts have been recovered.

The Russian ministry said the Israelis must have known that the Russian plane was present in the area, but this did not stop them from executing “the provocation.” Israel also failed to warn Russia about the planned operation in advance. The warning came just a minute before the attack started, which “did not leave time to move the Russian plane to a safe area,” the statement said.

A later update said debris from the downed plane was found some 27 kilometers off the Latakia coast. The search party collected some body parts, personal possessions of the crew, and fragments of the plane.

Israel did not comment on the reports about the air raid in Syria, which is consistent with its usual policy on such matters. Israeli officials earlier acknowledged hundreds of airstrikes conducted in Syria over the past years. Israel claims its interventions are necessary to fight the Iranian presence in its neighboring country.

Israel’s Embassy in Moscow has refused to comment on Russian Military’s statement on Il-20 crash.

The Russian Il-20 was accidentally shot down by an aging Syrian S-200 antiaircraft missile system during the chaos as Russia scrambled planes to respond to the attack. Russian radar also registered missile launches from the French frigate, but it’s unclear how this factored into the attack, if at all. 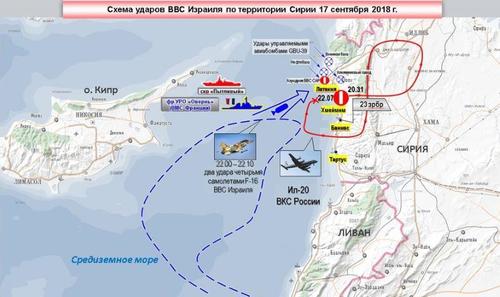 This isn’t the first time that Israel has pushed tensions to the brink of an all-out war as it has repeatedly intervened in Syria despite warnings from Russia and its allies. However, with 15 dead service-members on their hands, Russia has threatened to “respond adequately” to the attack. We now wait to see what Putin does next.

Welcome to Foreign Policy with Robert Inlakesh. In this series Robert dives into some of the most important foreign policy discussions of today while highlighting the most important information – primarily that which is missed, excluded or misrepresented by the MSM. Bitcoin Donations Are Appreciated: www.thelastamericanvagabond.com/bitcoin-donation (3FSozj9gQ1UniHvEiRmkPnXzHSVMc68U9f)

The Most Dangerous Man in America

The most dangerous man in America knows — without any doubt whatsoever — that the U.S. Federal Government executed the false flag terrorist attacks on September 11, 2001. They know that this highly calculated and synthetic form of terrorism was perpetrated to terrorize the American people into supporting a fake War on Terror.  They actually know Read More…

Now over thirty years ago a woman named Cathy Jordan was diagnosed with ALS (Amyotrophic Lateral Sclerosis) also known as Lou Gehrig’s disease. In 1986 she was given 3 – 5 years to live. At a time when marijuana was in no way recognized as a valid medical treatment, and with no other treatments to rely on, she Read More…