Nicolás Maduro was successfully re-elected president of Venezuela on Sunday, receiving 5.8 million of the 8.6 million ballots cast, on a turnout of 46 percent. His nearest challenger, Henri Falcon, received 1.8 million votes. The process was watched over by 150 international observers from over 30 countries, among them former Spanish Prime Minister José Luis Rodríguez Zapatero, who said (Telesur, 5/20/18): “I do not have any doubt about the voting process. It is an advanced automatic voting system.”

Another election observer was former Ecuadoran President Rafael Correa, who announced via Twitter (5/20/18):

The Venezuelan elections are developing with absolute normalcy. I’ve attended four polling stations. There is a permanent flow of citizenship, with short waiting and voting times. Very modern system with double control. From what I’ve seen, [it’s] impeccable organization. 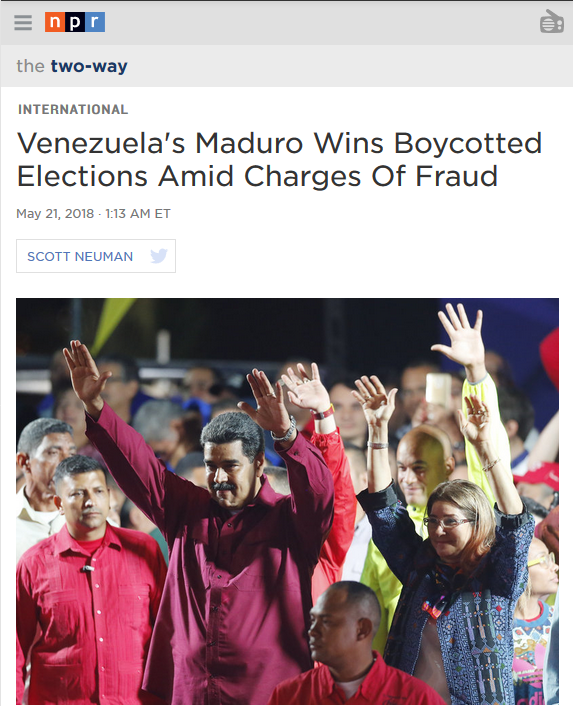 However, Western media have taken an entirely different outlook to the proceedings, unanimously presenting them as seriously flawed, at best, and at worst a complete sham presided over by a dictator. The New York Times (5/20/18) presented the election as “a contest that critics said was heavily rigged in his favor,” Huffington Post (5/21/18) christened it “a vote denounced as a farce cementing autocracy in the crisis-stricken OPEC nation,” while NPR (5/21/18) stated:

Nicholas [sic] Maduro has easily won a second term, but his main rivals have refused to accept the results, calling the polling fraudulent—a view shared by the United States and many independent observers.

Apart from spelling the president’s name wrong, the only source that could be an “independent” observer quoted was the Washington-based, State Department–funded conservative group Freedom House, a rather questionable example of an “independent observer.” 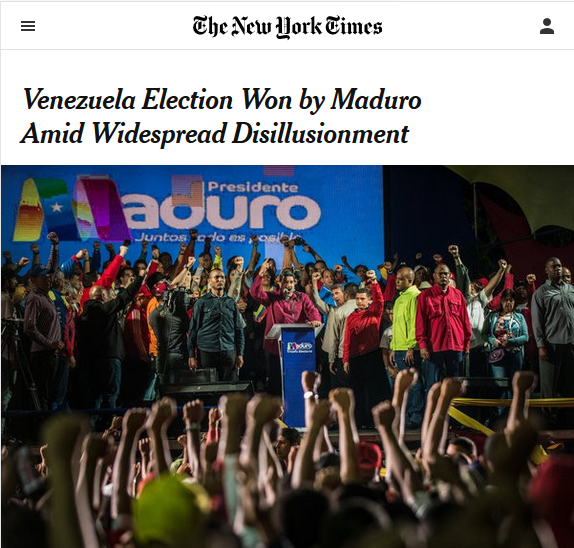 Across media, coverage was eerily similar. Indeed, most media outlets even used the same word choice and structure in their headlines, declaring Maduro the winner while undermining the system’s legitimacy with the helpful preposition “amid”: 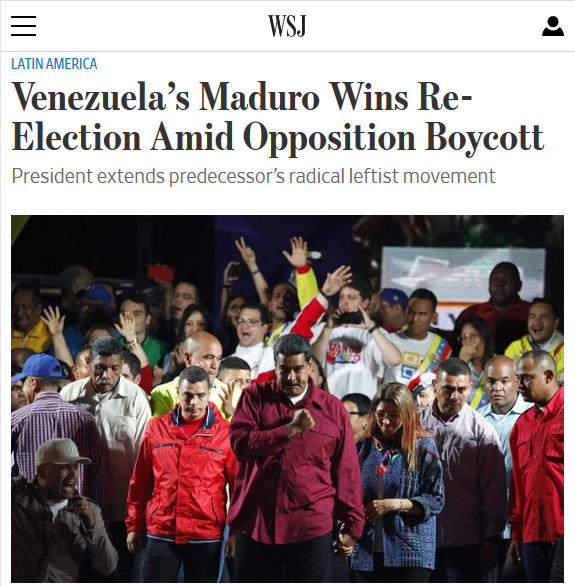 None of these articles mentioned Correa, Zapatero or any other official observers’ comments. Not that they were hard to find; Correa has over 3.4 million followers on Twitter and his comment was re-tweeted over 3,500 times at the time of writing. Instead, they unanimously presented as a farce the election system the European Parliament (12/15/05) called “in line with the most advanced international practice,” the EU (12/4/06) called “efficient, secure and auditable, and the competence of the technical experts is in line with its advanced technological level,” and Jimmy Carter (9/21/12) called “the best in the world…a very wonderful voting system.”

Despite an opposition boycott making the result predictable, Maduro received the vote of 28 percent of the eligible electorate, around the same as Barack Obama received in 2008 and more than he got in 2012, or Trump in 2016, despite these being hotly contested elections. Ignoring this, Reuters (5/20/18) claimed poor Venezuelans were voting for Maduro because they believed they were going to “win a prize.”

The extraordinary similarity and negative tone across Western media should not surprise anyone. As I detailed in Bad News From Venezuela: Twenty Years of Fake News and Misreporting, there have been enormous cuts to foreign reporting, leading to a situation where only a tiny cadre of journalists create the news we hear from other countries. Media copy and paste from news organizations like Reuters and Associated Press, which themselves employ many cheaper local journalists.

In Venezuela, these journalists are not neutral actors, but come from the highly partisan local media, affiliated with the opposition, leading to a situation where Western newsrooms see themselves as an ideological spearhead against Maduro, “the resistance” to the government.

In their crusade against Maduro, they are not above publishing fake news or deliberately misleading content, such as the infamous “condoms costs $755 in Venezuela,” which was picked up across the world  (Time, 2/5/15; CNN, 2/6/15; Newsweek, 2/5/15). The originator of this story was unrepentant, claiming he would continue to use “sexy tricks” to get his point across. 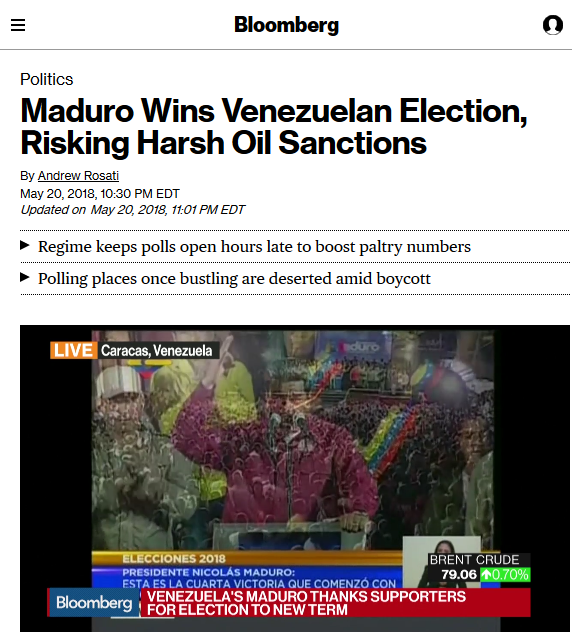 The typical tricks used to discredit the Venezuelan are less sexy—such as Bloomberg’s Andrew Rosati (5/21/18) declaring that victory in the “widely derided election” gives Maduro “sole ownership of the nation’s crushing economic crisis”—then in the very next sentence gloating that “US and regional leaders” will punish Venezuela for holding the vote by imposing “further isolation and sanctions on the crisis-stricken nation’s all-important oil industry.” You have only yourself to blame, apparently, for defying the will of Washington.

Welcome to The Daily Wrap Up, a concise show dedicated to bringing you the most relevant independent news, as we see it, from the last 24 hours (4/3/19). As always, take the information discussed in the video below and research it for yourself, and come to your own conclusions. Anyone telling you what the truth Read More…

Dr. Robert Weiss believes that a change is coming about in the way we approach health and medicine, or rather a reconnection with knowledge that was shunned with the onset of Big Pharma. He sold his practice in New York and built the first farm-based medical practice on a 348-acre farm in Long Valley, New Read More…

Following a long-winded, and now seemingly unnecessary campaign over the last few years to convince the public that there is no connection between vaccines and autism, the FDA released a document in which they admit that autism is a possible side-effect of the Tripedia vaccine. In typical government fashion they have released this wildly important and Read More…