Who says nothing is made in the USA anymore?

Certainly not the well-heeled denizens of the State Department’s diplomatic corps. And they should know. That’s because they’re stationed on the front lines of the ongoing battle to preserve Uncle Sam’s dominant market share of the global weapons trade. Luckily for the Military-Industrial Complex, it turns out that “Made In the USA” inspires a lot of brand loyalty, even if actual loyalty is often a harder sell (paging Saudi Arabia). To wit, not only was America the world’s leading arms dealer in 2014 with $36.2 billion in sales, but it topped that 35% surge in sales over 2013 with yet another profitable spike to $46.6 billion in 2015.

As Stockholm International Peace Research Institute (SIPRI) determined in its recent report on the global arms trade, the United States maintains a commanding “33% share of total arms exports” and is the world’s top seller for five years running. And its customer base includes “at least” 96 countries, which is nearly half of the world’s nations. A robust 40% of those exports end up in the Middle East. Perhaps that’s why the State Department is so darn bullish on the prospects of Uncle Sam’s booming business of selling things that go “boom!”

That’s the takeaway from a recent report in Defense News highlighting the marketing push by “Commercial Officers” stationed at the US embassy in Jordan. They worked the crowd at the kingdom’s eleventh bi-annual Special Operations Forces Exhibition and Conference (SOFEX).  Like many of the nearly 100 military-themed “trade shows” held around the world this year alone, SOFEX offered the profiteers of doom an opportunity to display their merchandise and to cut deals with bellicose browsers ready to pull the trigger on a deadly impulse buy. Some of the bigger, “glitzy” trade shows — like the International Defence Exhibition and Conference (IDEX) held yearly in Abu Dhabi — are full-on one-stop-shopping destinations for the up-and-coming military powers on the move, the newly-minted pro-Western junta eager to armor-up, and the forward-thinking “Coalition Partner” looking for the latest in “kinetic warfare.”

If nothing else, trade shows offer defense contractors a chance to give out “promotional tchotchkes” to potential future customers who might be swayed to double-back by a branded camouflage carryall or a Digi Camo Military Bert Stress Reliever. No doubt it’s a tedious affair, but the presenters toiling behind the displays are not alone on the battlefield of commerce. That certainly was the case at SOFEX, where the U.S. Embassy deployed Senior Commercial Officer Geoffrey Bogart and Regional Safety and Security chief Cherine Maher to act as sale-force multipliers for America’s military moneymakers. As Jen Judson detailed, Bogart and Maher tracked down sales leads throughout a region gripped by chaos since America wantonly destroyed a bystander nation under false pretenses (a.k.a. Iraq). Here are Judson’s highlights from Bogart and Maher’s magical misery tour of the profitable market forces currently shaping America’s recently reshaped Middle East: 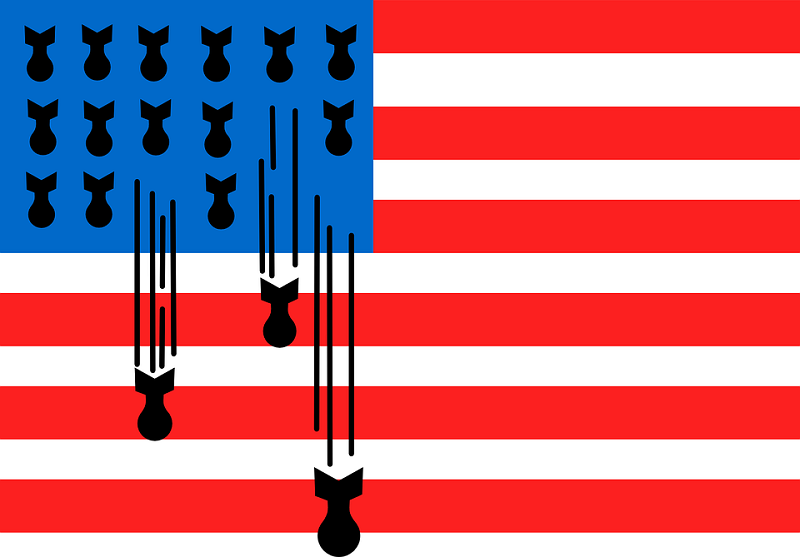 JORDAN: “We are very high on the safety and security market in Jordan,” Geoffrey Bogart, a commercial officer at the US Embassy said. Bogart said there is an abundance of market prospects for US companies to do business in Jordan, including in border security, cyber security, command and control centers, telecommunications equipment, military vehicles, artillery, tactical equipment, bomb and metal detectors, and closed circuit television (CCTV) and access control.

EGYPT: “Egypt is facing a lot of challenges especially in terms of border control and whether it’s from the West or the East or the North or the South, so the main project that is going on is border and perimeter control,” Maher said, which means the country really wants bomb detection, jammers and improvised explosive device diffusers.

LIBYA: The current instability in Libya has led to challenges for US firms, according to Maher; however, US companies’ products are in high demand there. “The trick is how to enter the market, who to sell to, and making sure of export license,” she said, adding some products that had been permitted to be sold to Libya now have restrictions.

TUNISIA: There is continuous growth in Tunisia’s defense market, Maher said. Tunisia plussed up its security forces budget in 2016 due to growing terrorist threats in the region. The country wants to build up its force capacity to deter regional threats, strengthen defensive capabilities and support counterterrorism operations.

LEBANON: Lebanon is interested in border security; however, it’s particularly interested in securing public buildings and providing for civilian protection due to ongoing insecurity in some towns and cities near Beirut, Maher said.

IRAQ: Maher said Iraq has a particularly “dynamic” market valued in 2014 at about $7.6 billion, which is about 3.44 percent of its GDP. With the ongoing war against the Islāmic State group, it is anticipated that Iraq will soon spend around $19 billion, which would make up about 18 to 20 percent of its GDP. Like all the other countries in the region, Iraq is investing heavily in safety and security equipment, and also wants personal protective gear and security systems for residential and commercial buildings, according to Maher.

A “dynamic” market is right … that is, if you’re General Dynamics. Or Lockheed Martin. Or Boeing. Or any of the big six defense contractors who together took home $90.29 billion of the over $175 billion worth of taxpayer dollars doled out last year to the top 100 military contractors. Not coincidentally, seven of the top eight U.S. Government contractors are defense companies, with only health care services provider McKesson making it past a phalanx of defense wheelers and dealers.

It’s a rarified world greased last year by $127.39 million of lobbying largesse and another $32.66 million spent so far this year, according to OpenSecrets.org. Of course, lobbying offers a great bang for the buck when it comes to stoking sales. A McKnight analysis earlier this year found that

“major U.S. government contractors have received $1,171 in taxpayer money for every $1 invested in lobbying and political action committee contributions during the last decade.”

Still, nothing quite compares to the breeder reactor effect that comes from using expensive military hardware to destroy regimes in a never-ending global war against a tactic. Regime change touched off civil war in Iraq. That spread to Syria which, in turn, sent over 660,000 refugees into Jordan and over one million refugees into Lebanon … all of which explains why Bogart and Maher are so bullish on the sale of security-related products to those two nations and why the entire region is in the midst of a military buying spree.

Then there is the chaotic aftermath of regime change in Libya, which threatens to spill over to two more booming markets — Tunisia and Egypt. Of course, Egypt had its own U.S.-endorsed internal regime change at the hands of a loyal customer and longtime recipient of American “aid”— the Egyptian military. It was really a “coup,” but U.S. law would’ve prevented selling Egypt’s military junta tear gas canisters marked “Made In USA” (among other things) if it was officially a coup d’etat, so the Obama Administration simply didn’t call it a coup.

Now, according to Ms. Maher, Egypt’s military is in the market for yet more military hardware that, according to a new GAO report detailed by The Intercept, is not being properly or legally vetted by the State Department. Those purchases are easily funded by the $6.4 billion in U.S. aid since the coup in 2011. And (go figure) Egypt’s wishlist is justified, in part, by the sudden need to ward off interlopers from regime-changed Libya, which, according to the aforementioned Ms. Maher, is still a red-hot market for U.S. arms dealers … if they can get the export licenses.

And so the dynamic market churns onward — with tax dollars paying the salaries of State Department “Commercial Officers” who work for the heavily-subsidized U.S. defense industry as salespeople in overseas markets destabilized by taxpayer-funded wars fought by taxpayer-supported American soldiers armed with weaponry purchased from that self-same defense industry with — you guessed it — more tax dollars.

The “diplomats” in the State Department act as important go-betweens in the process, helping “customers” navigate the military-industrial complexities of end-user certificates, export licenses, and human rights restrictions so they can spend taxpayer-funded U.S. “aid” that invariably ends up back in the coffers of Lockheed, Boeing, Raytheon, and so on.

Once the money makes it back home to the defense industry, those companies invest some of their windfalls into lobbying, into SuperPACS, into both political parties, and directly into campaigns of the Congressional cronies who dutifully rubberstamp the defense budget that enriches the defense industry. So far this year, they’ve poured over $17 million into those efforts and, in turn, they’ve provided the fuel to run the “dynamic” perpetual machine in which the State Department is a vital cog.

And this is why the folks at the State Department know full-well that, in fact, America still actually makes something — it is the world’s leading manufacturer of war.

Welcome to The Daily Wrap Up, a concise show dedicated to bringing you the most relevant independent news, as we see it, from the last 24 hours (1/28/19). As always, take the information discussed in the video below and research it for yourself, and come to your own conclusions. Anyone telling you what the truth Read More…

In yet another step towards the establishment of a world military force that seeks peace through the absence of dissent, the United States announced its support in May for a set of principles that will allow the United Nations’ peacekeeping troops and UN police to use force in order to “protect civilians” in combat zones Read More…

Trump, like many presidents before him, essentially argues that international law must be broken if it is to be saved. With the bombing of Syria, however, he violated more than just international law. The U.S. missile attack on Syria in response to unproven chemical weapons use by the Assad regime once again puts America in violation of Read More…