Recently in the news, Chipotle has been under some major scrutiny regarding the outbreak of E. coli and norovirus, both reportedly linked to the restaurant chain. According to the CDC, there have been 53 cases of E. coli from Chipotle while over 80 people are possibly linked to norovirus through Chipotle. No deaths have yet been reported.

Now often times, people will look at this information as a string of isolated incidents or possibly the result of poor business practices on the part of Chipotle. This very well may be true. However, the story is often far more complicated and not as simple as it is always portrayed in the media. Could there be more to it?

An angle many never even consider is the possibility that criminal elements are involved. There are some anomalies with the Chipotle outbreak that have left some wondering if maybe the chain is the victim of deliberate sabotage. Currently this is only speculation, yet the possibility is there, and therefore exploration of that angle is important to get a whole understanding of the objective truth. One must become aware of all information before making a decision, not just what one wants to hear or what “official sources” say.

First, the strand of E. coli in some of the cases is a rare DNA fingerprint of Shiga toxin-producing E. coli O26 (STEC 26), hardly found in fast food restaurants. The outbreak of norovirus was also unique in that just under 3 percent of the food-related norovirus outbreaks that the Centers for Disease Control and Prevention tracked from 2009 to 2014 sickened 80 or more people. Only 1.3 percent of outbreaks sickened 140 or more people. To have two different outbreaks of both rare variety and only contained to one restaurant is a bit rare and out of the ordinary. 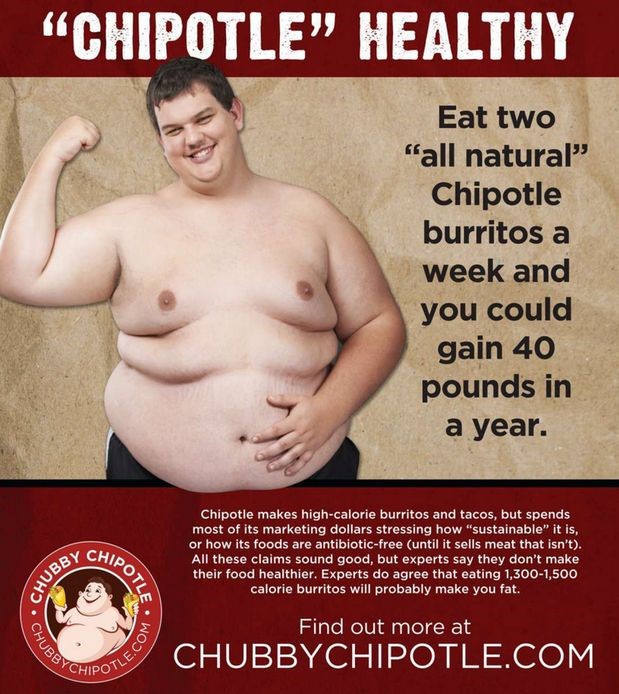 Another factor that comes into play is the fact that a major ad campaign has been launched against Chipotle just within the last few months with an ad being bought out and displayed in the NY Post. Its being headed and run by the Center For Consumer Freedom, a non-profit organization devoted to promoting personal responsibility and protecting consumer choices, or at least so they say.

Interestingly enough, the Center for Consumer Freedom is owned and started by Rick Berman, a slick Washington insider who has worked as a lobbyist and PR strategist for the business elite. He has been referred to as Dr. Evil and a quick Google search will give one a quick glimpse into his questionable and shady past. To many, the non-profits run by Berman are nothing but business fronts that allow them to wage PR wars against anybody they so please while keeping their donors completely anonymous. Chipotle has even stated that the CCF is waging a “smear campaign conducted by an organization with anonymous donors.”

There is no doubt as well that Chipotle poses a major threat to the food industry as they are a fast-growing, hip restaurant that has taken a major stance as the only fast food restaurant speaking out against GMO’s and actually ceasing to use them in any of their products. They also operate a much more localized and decentralized model, not so dependent on big agribusiness in their supply chain. Their success was clear as their stock had been on a serious rise with people continuing to become more consciously aware of what they’re putting in their body. Chipotle has essentially capitalized on a public that is becoming more informed on its health.

Following the recent outbreaks, the stock of Chipotle has really been on a wild ride and has suffered a decrease in stock price and overall confidence. 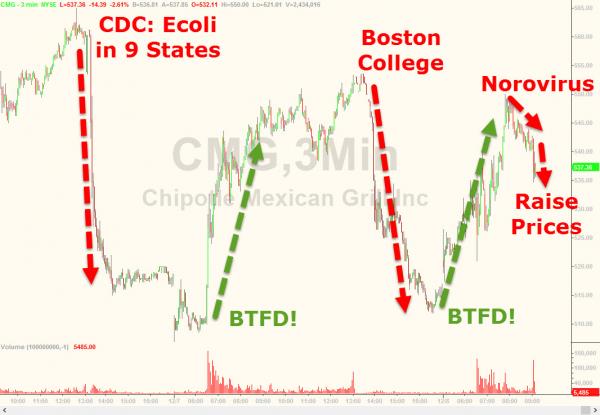 The last nugget to consider is the fact that the CDC and biotech companies have dealt with criminal elements that often resort to deceptive and evil practices to achieve their agendas. Considering this as a possibility for recent events, the failure of the Chipotle chain would be a blow to non-GMO food and would instantly send a message to all other food companies thinking about following suit, letting them know what happens if they don’t play ball.

It’s important that people take in all the facts and possible connections when considering a case of this nature. Deceptive and criminal activities do take place in society at the highest levels of business and government, so it’s important the public remain aware of the different threads and angles before jumping to any predetermined conclusion. Research all sources of information and stay informed. This story is no doubt far from over.

Hundreds of Yellow Vest protesters gathered outside France’s BFM TV station for week seven of nationwide protests. The protesters chanted various versions of “Fake news journalists come down,” and “Macron out!” at the TV station which one protester told RT France spreads false information about the movement, while purposefully understating the size of its demonstrations. Saturday’s protesters Read More…

Last year, representatives of Facebook, Twitter, and Google were instructed on the US Senate floor that it is their responsibility to “quell information rebellions” and adopt a “mission statement” expressing their commitment to “prevent the fomenting of discord.” “Civil wars don’t start with gunshots, they start with words,” the representatives were told. “America’s war with Read More…