Last week we reported that as Illinois, a state which now faces over $15 billion in backlogged bills, struggles over the next two weeks to somehow come up with its first budget in three years ahead of a June 30 fiscal year end, and faces an imminent ratings downgrade to junk – the first ever in US state history – traders finally puked, sending the yield on its bonds surging after a judge ruled at the start of the month that the state is violating consent decrees and previous orders, and instructed the state to achieve “substantial compliance with consent decrees”, further pressuring its financial situation. 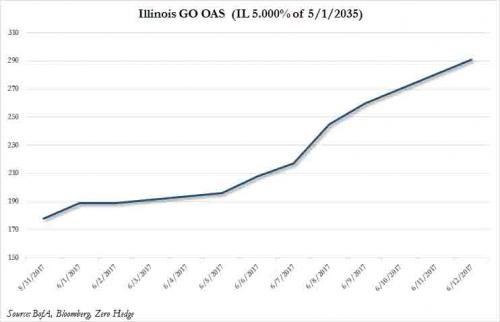 In a last ditch attempt to resolve the ongoing budget impasse and prevent a potential crisis, which may culminate with an eventual default by the distressed state, yesterday the WSJ reported  that Illinois Gov. Rauner ordered lawmakers to return for a special session this week, but the two sides still seem far apart. Republican Gov. Bruce Rauner ordered the special session starting Monday, as the backlog of unpaid bills reaches $15.1 billion.

“Everyone needs to get serious and get to work,” he said in a video announcing the session that his office posted on Facebook.

As reported previously, the state Transportation Department said it would stop roadwork by July 1 if Illinois entered its third consecutive fiscal year without a budget – the longest such stretch of any US state – while the Powerball lottery said it may be forced to dump Illinois over its lack of budget. For now, state workers have continued to receive pay because of court orders, but school districts, colleges and medical and social service providers are under increasing strain.

And yet, despite the sharp selloff in Illinois GO bonds which some had expected could force the two sides to reach a bargain, neither the Democrat-led legislature, nor Republicans governor Bruce Rauner appear closer to a consensus. Which probably explains today’s Associated Press “shock piece” exposing just how serious the situation could become in under two weeks absent a resolution. It focuses on state Comptroller Susana Mendoza – who has had the unenviable job of essentially sitting at the kitchen table trying to figure out how to pay the bills – who is warning that the previously discussed new court orders in lawsuits filed by state suppliers that are owed money mean her office is required to pay out more than Illinois receives in revenue each month. That means there would be no money left for so-called “discretionary” spending – a category that in Illinois includes school buses, domestic violence shelters and some ambulance services.

“I don’t know what part of ‘We are in massive crisis mode’ the General Assembly and the governor don’t understand. This is not a false alarm,” said Mendoza, a Chicago Democrat.

“The magic tricks run out after a while, and that’s where we’re at.”

As AP sums it up, “it’s a new low, even for a state that’s seen its financial situation grow increasingly desperate”, a state which has a website dedicated to tracking the daily amount in overdue bills…

… and has the lowest credit rating of any state.

Lawmakers from both parties have acknowledged Illinois needs to raise taxes to make up for revenue lost when a previous tax hike expired, leaving the state on pace to take in $6 billion less than it is spending this year — even without a budget.

That, however, is being blocked by Rauner, who wants Democrats to approve changes he says are needed to improve Illinois’ long-term financial health before he’ll support a tax increase. Among them are “term limits for lawmakers, a four-year property tax freeze and new workers’ compensation laws that would reduce costs for employers.” Democrats have balked at the full list, saying they’re willing to approve some items on Rauner’s list, but that what he’s demanding “keeps changing or goes too far and would hurt working families.” Senate Democrats also note that they approved a $37 billion budget with $3 billion in cuts and an income tax increase in May. The House has not taken up that plan.

In a scenario reminiscent of ongoing events in insolvent Greece, state funding has been reduced or eliminated in areas such as social services and higher education. Many vendors have gone months without being paid. And increasingly, they’re filing lawsuits to try to get paid. As discussed last week, the courts already have ruled in favor of state workers who want paychecks, as well as lottery winners whose payouts were put on hold. Transit agencies have sued, as has a coalition of social service agencies, including one that’s run by Rauner’s wife. Health care plans that administer the state’s Medicaid program also asked a federal judge to order Mendoza’s office to immediately pay $2 billion in unpaid bills. “They argued that access to health care for the poor and other vulnerable groups was impaired or “at grave risk” because the state wasn’t paying providers, causing them to leave the program.”

As one after another deadline looms, on June 7, Judge Joan Lefkow ruled that Illinois isn’t complying with a previous agreement to pay the bills and gave attorneys for the providers and the state until Tuesday to work out a level of payment.

Meanwhile, comptroller Mendoza says whatever that amount will be, it will likely put Illinois at the point where 100 percent of revenues must be paid to one of the office’s “core priorities,” such as those required by court order. And if this lawsuit doesn’t do it, the next court ruling against the state will.

In other words, the already insolvent state is about to be slammed with another deluge for bills which it can’t pay. Then, she’s not sure what will happen, other than more damage.

Welcome to The Daily Wrap Up, a concise show dedicated to bringing you the most relevant independent news, as we see it, from the last 24 hours. (Before checking out the YouTube version below, please consider checking us out on DTube first, as we attempt to being pulling away from YouTube and Google in general) (https://d.tube/#!/v/tlavagabond/dhcbjz0o) Read More…

Welcome to The Daily Wrap Up, a concise show dedicated to bringing you the most relevant independent news, as we see it, from the last 24 hours (3/27/21). As always, take the information discussed in the video below and research it for yourself, and come to your own conclusions. Anyone telling you what the truth Read More…