A Banksy painting “self-destructed” Friday evening on the auction podium at Sotheby’s New Bond Street location in London after being sold for 1.04 million pounds.

The spray-painted canvas “Girl With Balloon” was subjected to furious bidding at the Contemporary Art Evening Sale with a winning bid by telephone, fetching more than three times its pre-sale estimate and a record price for the mysterious artist. Shortly after the auction was concluded, an alarm from within the painting sounded, with most of the artwork emerging from the bottom in strips. Hidden within the base of the frame was a shredder. 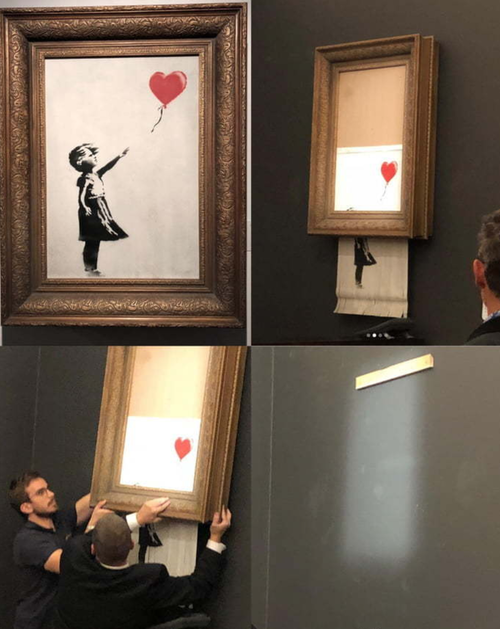 “We’ve just been Banksy’ed,” Alex Branczik, Sotheby’s European head of contemporary art, said at a press conference after the auction.

“We have not experienced this situation in the past . . . where a painting spontaneously shredded, upon achieving a [near-]record for the artist. We are busily figuring out what this means in an auction context,” he said.

Banksy, who remains one of the most mysterious artists of this era, began his career spray-painting buildings in England and has become a global figure. Some of his works include two policemen kissing, armed riot police with yellow smiley faces, and a chimpanzee with a sign displaying the words “Laugh now, but one day I’ll be in charge.”

A post on Banksy’s official Instagram page showed the moment when auction house officials and bidders were stunned when the artwork self-destructed. He titled the post “Going, going, gone…”

kimsingh, an Instagram user, said, “You have consistently shown the courage to thumb your nose at the commercialism of art. Bravo !!”

Another user asked, “Was it supposed to stop halfway or did it jam?”

Banksy had made his feelings known about the commercial art world in a recent masterpiece titled “I Can’t Believe You Morons Actually Buy This Shit.”

Troy, 12th century BC. The Greeks’ decade-long siege of Troy is drawing to a close. The cunning Odysseus has hit upon a plan to subvert the Trojans’ defenses. The Greeks build a giant wooden horse and then pretend to sail away, leaving the horse at the gates of Troy as an apparent offering to the Read More…

Mike Adams of Natural News released a research article today, with crystal clear sources, highlighting the beginning of the government conspiracy to bury the highly toxic poisoning of Flint, Michigan’s public water supply–something that public officials knew about for months without addressing, and have still received no punishments or sentencing for this. Matthew McFarland, Flint’s Read More…

A since-deleted analysis posted the agency’s website shows it is relying on unpublished reports from groups linked to biochem industry The U.S. Environmental Protection Agency (EPA) used industry-funded research to conclude that the herbicide chemical glyphosate is not likely to cause cancer in humans—contradicting findings by the World Health Organization (WHO)—according to an analysis the Read More…