Propaganda comes in many shapes and sizes – and our government seems to employ each one with taciturn precision: from popular artwork, to political ads, news, media, television shows, film and even music. “Psychological and informational operations” they’re called, America’s secret cerebral campaigns.

In America’s recent past, psychological operations (or Psy-Ops) were not technically legal for the government to run in America against Americans, yet that did not always stop them, as our government had some exceptionally sly methods for working around that complication. Yet today, it has now become legal for such psychological operations to operate on American soil with the intention of manipulating the way Americans think, feel and act… for national security of course. And yes you heard that correct, it now legal.

Americans are constantly encouraged to participate in capitalism, instilled with the illusion of political choice, and convinced, swayed, or tricked into believing whatever our government wants. We are used to justifying their means with public “support” that they themselves sowed. Mind games. But our government runs Psy-Ops in almost every country they have a stake in, not just the good ol’ US of A.

Recently, news broke that, at the onset of America’s famous invasion of Iraq, the Pentagon hired PR firm Bell Pottinger to create fake al-Qaida propaganda videos – and they were paid almost a half-billion dollars (of US taxpayer money) for the product. Bell Pottinger was instructed to make the films in the style of Iraqi network news and insurgent videos, and disseminate them across the war-torn country to frame al-Qaida in negative light. They even wrote Arabic soap opera scripts criticizing al-Qaida, and showing positive consequences for rejecting terrorism.

Belle Pottinger really went all out for this project. And this is absolutely not the first time this PR firm has been involved with controversial, shady clients. Notably, one of their biggest clients is the Saudi government – Bell Pottinger Middle East was established in 2006, and evidence suggests that at that same time they were also working for the US government to create propaganda in Iraq. Which, in my humble opinion, stinks of war profiteering.

But why would the government pay such an exorbitant amount of money to externalize the content creation for its propaganda operations in the Middle East? Simply because, at the time, US law prevented them from creating it on their own – but if the propaganda is outsourced, and they can distance themselves from the people who actually made it, there is nothing stopping them from brainwashing whomever they want to however they feel like. 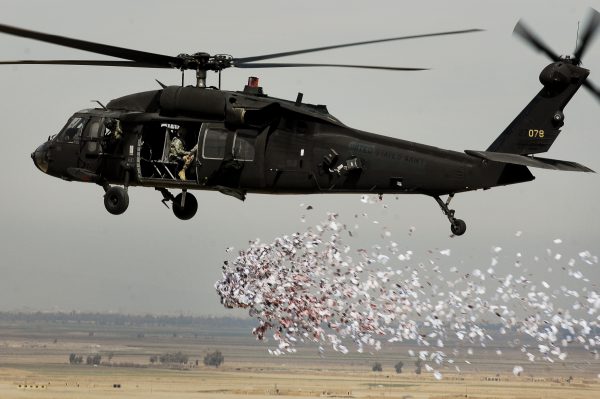 The thing is, a lot of Americans won’t have a problem with our government using propaganda against our enemies during a time of war. It is a time-tested strategy that works effectively. Minds are malleable. And government institutions like the FBI, and CIA have a lengthy history of testing and using psychological warfare abroad and at home. If you’ve ever heard of MK-Ultra, the CIA’s secret program dedicated to mind-control, and hypnosis, then you know what I’m talking about.

And therein lies the rub: if our government was using sneaky measures to circumvent its own laws in order to create and disseminate propaganda, what is stopping them from doing the same thing at home, especially now that they are legally allowed to do so? They can justify psychological and informational operations against our enemies, but explaining mind manipulation operations against the American people, would be very difficult.

There are no positive outcomes for such a situation. If the government is running covert psy-ops against the American people, and we find out about it, there will likely be a revolution that erupts out of the ensuing rage. If we never find out about it, they will continue to manipulate us psychologically, to achieve whatever diabolical ends they can dream up.

In the coming weeks we will hopefully learn more about the relationship between Bell Pottinger and the US government, and the extent to which their propaganda operations influenced the events during the Iraq war. But neither the pentagon nor the PR firm is eager to comment. The operations they ran were highly confidential, top secret exercises that were supposed to remain covert. Despite the secrecy surrounding Bell Pottinger’s work, the Pentagon has repeatedly asserted that the material produced by the PR firm was “truthful”…

I doubt that there will be any repercussions or serious outcomes in the wake of this revelation. The government will sweep it under the rug and it will be damned to be forgotten like so much of our important news issues. But propaganda is no trivial matter – the freedom of the American people will quietly disappear without anyone ever even noticing should the USA continue down the path to becoming a psy-op state. Our only hope of preventing that is to make it known that we, the American people, will not stand to be propagandized.

Will Brendza is a freelance journalist and aimless adventurer based out of the Rocky Mountains, a fearless student of science and a keen outdoorsman. After having witnessed firsthand the environmental abominations taking place both abroad and at home in the US, he resolved to spread the knowledge and drive for global sustainability. When he isn't writing or reading a good book, he can usually be found exploring foreign countries, savoring craft breweries or somewhere deep within the wilderness of Colorado."


Then the DEEP paranoia sets in, and it makes me wonder: is THIS article maybe govt. sponsored propaganda? Are they watching me READ this? Why havent the Clintons droned Alex Jones yet? AAHHH! how much is a ticket to Antarctica?!!