Dozens of South Koreans were injured in clashes between protesters and police last Thursday as the U.S. military added more launchers to its missile defense system in the Korean town of Seongju, PBS reports.

The local farming village in rural Seongju does not view Washington’s deployment of the Terminal High-Altitude Area Defense System (THAAD) favorably. Rather, they see it as a direct risk to their lives and livelihoods. According to a fire department official in Seongju, 38 people, including six police officers, were injured after police sent thousands of officers to remove hundreds of protesters from the road leading to where the defense system is located. Having dispersed the protesters, officials speaking on the condition of anonymity said the U.S. military will be able to move four launchers and other equipment to the site.

According to the Washington Post, the THAAD normally consists of six launchers, but only two of them have been operational (hence the deployment of the other four). It is not clear when the next four launchers will be fully operational. 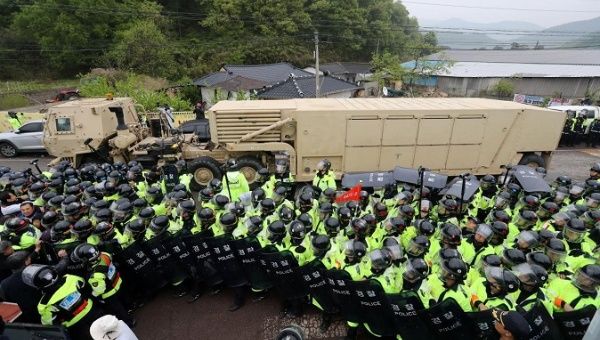 Largely overlooked by hawkish members of the world’s various governments — and the American public — is the direct impact that U.S. military adventures’ have on innocent civilians across the globe. In June 2003, 50,000 South Koreans protested in Seoul against the U.S. military’s presence in their country. The protests took place on the anniversary of the deaths of two schoolgirls who were crushed by a U.S. Army mine-sweeping vehicle.

Related Reading: The Bad Guys Are The Ones Invading Sovereign Nations, Not These Guys

South Korean Gangnam-style internet sensation Psy wrote a song about the incident before he became famous in the West, calling for the deaths of American troops and their families in the lyrics.

This is the anti-American sentiment that has permeated cultures right across the board. It cannot be restricted to a one-sided “Muslims hate us for our freedoms” argument when it is clear that many cultures who have to live in fear of the U.S. military machine also feel the same way.

Any conversation about the “threat” of North Korea must take into account the direct impact any of these military maneuvers and the never-ending war of words has on the local populations who will be most directly affected. It is one thing to live thousands of miles away from the Korean peninsula and call for the U.S. to “take out” the North Korean leadership; it is something entirely different when you or your loved ones are actually within strike range.

Placing the THAAD system in a rural area makes the villagers a prime target for North Korea. Understandably, these villagers are protesting this dilemma, and the fact that it took thousands of police officers to forcibly remove them and ultimately injure dozens of them in the process speaks volumes as to how badly the civilians on the ground do not want war.

I just wanted to give everyone a quick reminder of the fact that the MEK, an Iranian cult of highly suspicious funding which is beloved by Trump insiders like John Bolton and Rudolph Giuliani for its extremely vocal pro-regime change agenda, was removed from the US State Department’s list of designated terrorist organizations by none other than Hillary Rodham Clinton. I point this out Read More…

Seattle, WA – On the NFL’s opening weekend the Seattle Seahawks are planning to become the first team to join Colin Kaepernick’s silent protest during the national anthem. Seattle wide receiver Doug Baldwin took to social media yesterday to confirm speculation that the team will be engaging in some type of unified display during the Read More…

Legacy of the Media President

“An Interesting transformation for the network journalist: the ability to get on the air, which was crucial to any reporter’s career, grew precisely as the ability to analyze diminished.”   The Powers that Be – David Halberstam It is no surprise to anyone that today’s political ideals have struggled to remain in the field of Read More…