In what would under other circumstances likely be a major media spectacle, Politico reported that the Obama administration is moving to dismiss charges against an arms dealer whom it had accused of selling weapons destined for Libyan rebels and who had threatened to expose Hillary Clinton’s talks about arming anti-Qaddafi rebels.

According to a motion filed in federal court in Phoenix, the DOJ on Monday filed a motion to drop the case against the arms dealer, an American named Marc Turi. One potential reason for the surprising move is that as Politico writes, the deal averts a trial that threatened to cast additional scrutiny on Hillary Clinton’s private emails as Secretary of State, and to expose reported Central Intelligence Agency attempts to arm rebels fighting Libyan leader Moammar Qadhafi. 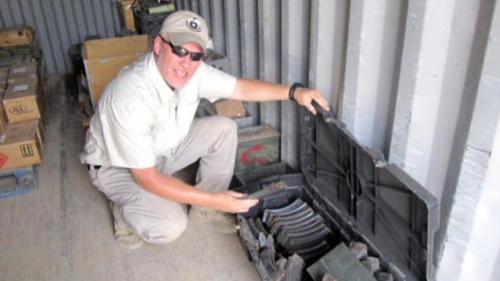 Turi was indicted in 2014 on four felony counts: two of arms dealing in violation of the Arms Export Control Act and two of lying to the State Department in official applications. The charges accused Turi of claiming that the weapons involved were destined for Qatar and the United Arab Emirates, when the arms were actually intended to reach Libya. Turi’s lawyers argued that the shipments were part of a U.S. government-authorized effort to arm Libyan rebels. It’s unclear if any of the weapons made it to Libya, and there’s no evidence linking weapons provided by the U.S. government to the Benghazi attacks.

According to Politico government lawyers were facing a Wednesday deadline to produce documents to Turi’s legal team, and the trial was officially set to begin on Election Day, although it likely would have been delayed by protracted disputes about classified information in the case. A Turi associate asserted that the government dropped the case because the proceedings could have embarrassed Clinton and President Barack Obama by calling attention to the reported role of their administration in supplying weapons that fell into the hands of Islamic extremist militants.

Making matters worse, Turi’s case had delved into emails sent to and from the controversial private account that Clinton used as Secretary of State, which the defense planned to harness at any trial.

“They don’t want this stuff to come out because it will look really bad for Obama and Clinton just before the election,” said the associate.

Leery of admitting the actual truth, in the dismissal motion, prosecutors were vague saying that “discovery rulings” from U.S. District Court Judge David Campbell contributed to the decision to drop the case. The joint motion asks the judge to accept a confidential agreement to resolve the case through a civil settlement between the State Department and the arms broker.

Additionally, Turi’s defense was pressing for more documents about the alleged rebel-arming effort and for testimony from officials who worked on the issue the State Department and the CIA. The defense said it planned to argue that Turi believed he had official permission to work on arms transfers to Libya. “If we armed the rebels, as publicly reported in many, many sources and as we strongly believe happened and as we believe at least one witness told the grand jury, then documents about that process relate to that effort,” Cabou told Campbell at the same hearing last year.

And so, the best course of action for the DOJ was to shut the case down, or else risk drawing unwanted attention to Hillary at the most sensitive time for the presidential candidate.

“Our position from the outset has been that this case never should have been brought and we’re glad it’s over,” said Jean-Jacques Cabou, a Perkins Coie partner serving as court-appointed defense counsel in the case. “Mr Turi didn’t break the law….We’re very glad the charges are being dismissed.”
Under the deal, Turi admits no guilt in the transactions he participated in, but he agreed to refrain from U.S.-regulated arms dealing for four years. A $200,000 civil penalty will be waived if Turi abides by the agreement.

A State Department official confirmed the outlines of the agreement.

To be sure, the lawsuit devolved into a case of who said what.

According to a government official who asked not to be named,

“Mr. Turi cooperated with the Department’s Directorate of Defense Trade Controls in its review and proposed administrative settlement of the alleged violations. Based on a compliance review, DDTC alleged that Mr. Turi…engaged in brokering activities for the proposed transfer of defense articles to Libya, a proscribed destination under [arms trade regulations,] despite the Department’s denial of…requests for the required prior approval of such activities.”

“The proposal did not result in an actual transfer of defense articles to Libya,” the State Department official told Politico on Tuesday.

On the other hand, Turi adviser Robert Stryk of the government relations and consulting firm SPG accused the government of trying to scapegoat Turi to cover up Clinton’s mishandling of Libya. “The U.S. government spent millions of dollars, went all over the world to bankrupt him, and destroyed his life — all to protect Hillary Clinton’s crimes,” he said, alluding to the deadly Sept. 11, 2012 terrorist attack on the U.S. Consulate in Benghazi, Libya.

At a court hearing in 2015, Cabou said emails between Clinton and her top aides indicated that efforts to arm the rebels were — at a minimum — under discussion at the highest levels of the government.

“We’re entitled to tell the jury, ladies and gentlemen of the jury, the Secretary of State and her highest staff members were actively contemplating providing exactly the type of military assistance that Mr. Turi is here to answer for,” the defense attorney said, according to a transcript.

Whatever the case, the overhang of another Libya snafu potentially muddying up the waters just before the election, was something the Clinton campaign could not afford as Republicans still hold Clinton responsible for mishandling the circumstances around that attack.

It is unlikely that the story will remain hushed for long, however: Stryk said that Turi was now weighing book and movie deals to tell his story, and to weigh in on the Benghazi attack.

Welcome to The Daily Wrap Up, a concise show dedicated to bringing you the most relevant independent news, as we see it, from the last 24 hours (4/12/19). As always, take the information discussed in the video below and research it for yourself, and come to your own conclusions. Anyone telling you what the truth Read More…

Anarcho-Capitalism: The Philosophical Structure for a New Society?

Power – the amount of control one has over the ability to act on something. Power is held at the individual level or in groups, and can be manifested internally or externally. Power can also be attained through individual action or collective action. For example, a person or group could acquire power internally from within Read More…