After approaching two months of talk of a “full” and “immediate” US troop withdrawal from Syria, first ordered by President Trump on December 19 — which was predictably met with swift and fierce pushback from beltway hawks including in some cases his own advisers — it now appears the death knell has sounded on the prior “complete” and “rapid” draw down order.

Trump said in a CBS “Face the Nation” interview this weekend that some unspecified number of US troops will remain in the region, mostly in Iraq, with possibly some still in Syria, in order “to protect Israel” in what appears a significant backtrack from his prior insistence on an absolute withdrawal.

“Look, we’re protecting the world,” he added. “We’re spending more money than anybody’s ever spent in history, by a lot.” Trump’s slow drift and change in tune on the subject of a promised “rapid” exit comes after Israeli officials led by Prime Minister Netanyahu alongside neocon allies in Washington argued that some 200 US troops in Syria’s southeast desert along the Iraqi border and its 55-kilometer “deconfliction zone” at al-Tanf are the last line of defense against Iranian expansion in Syria, and therefore must stay indefinitely.

“I want to be able to watch Iran,” Trump said further during the CBS interview. “Iran is a real problem.” He explained that “99%” of ISIS’s territory had been liberated but that a contingency of US troops must remain to prevent a resurgent Islamic State as well as to counter Iranian influence, for which American forces must remain in Iraq as well.

“When I took over, Syria was infested with ISIS. It was all over the place. And now you have very little ISIS, and you have the caliphate almost knocked out,” the president said. “We will be announcing in the not too distant future 100% of the caliphate, which is the area – the land – the area – 100. We’re at 99% right now. We’ll be at 100.”

However Trump’s invoking Iranian influence as a rationale for staying further contradicts his prior December statement that the defeat of ISIS was “the only reason” he was in Syria in the first place.

MARGARET BRENNAN: How many troops are still in Syria? When are they coming home?

MARGARET BRENNAN: When are they coming home?

PRESIDENT DONALD TRUMP: They’re starting to, as we gain the remainder, the final remainder of the caliphate of the area, they’ll be going to our base in Iraq, and ultimately some will be coming home. But we’re going to be there and we’re going to be staying—

MARGARET BRENNAN: So that’s a matter of months?

PRESIDENT DONALD TRUMP: We have to protect Israel. We have to protect other things that we have. But we’re- yeah, they’ll be coming back in a matter of time. Look, we’re protecting the world. We’re spending more money than anybody’s ever spent in history, by a lot. We spent, over the last five years, close to 50 billion dollars a year in Afghanistan. That’s more than most countries spend for everything including education, medical, and everything else, other than a few countries. — CBS “Face the Nation” Feb.3 interview transcript

The Pentagon in recent weeks has reportedly been putting logistics in place for a troop draw down from northern and eastern Syria.

Though it remains unclear just how many troops could remain as the majority possibly begin to pullout toward US bases in Iraq, the Tanf base could remain Washington’s last remote outpost disrupting what US defense officials see as a strategic Baghdad-Damascus corridor and highway, and potential key “link” in the Tehran-to-Beirut so-called Shia land bridge. 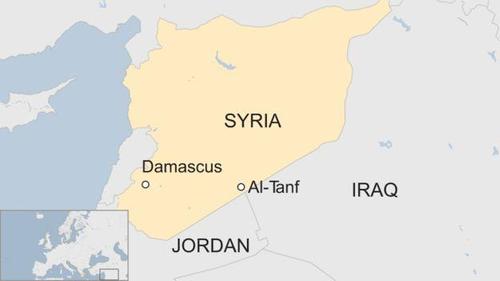 Foreign Policy magazine has identified this argument as the final card the hawks opposing Trump’s draw down had to play in order to hinder to an actual complete US exit:

“Al-Tanf is a critical element in the effort to prevent Iran from establishing a ground line of communications from Iran through Iraq through Syria to southern Lebanon in support of Lebanese Hezbollah,” an unnamed senior US military source told the magazine.

The Israeli prime minister has pushed hard against the White House pullout plan, and “has repeatedly urged the U.S. to keep troops at Al-Tanf, according to several senior Israeli officials, who also asked not to be identified discussing private talks,” per Bloomberg. The Israelis have reportedly argued “the mere presence of American troops will act as a deterrent to Iran” even if in small numbers as a kind of symbolic threat.

The internal administration debate, following incredible push back against Trump’s withdrawal decision, has made entirely visible the national security deep state’s attempt to check the Commander-in-Chief’s power. And now US presence at al-Tanf represents the last hope of salvaging the hawks’ desire for permanent proxy war against Iran inside Syria.

It appears the deep state has won out over Trump’s initial policy decision once again; but it remains to be seen if, however slowly on what’s clearly a delayed timetable departing from his original plans, all US troops ultimately exit Syria. Until then there’ll be more time and perhaps more provocations the hawks can rely on to effectively ensure full circle return to indefinite occupation in Syria.

Fresno, CA – An activist named John Lang was found stabbed to death inside of his home in January after predicting that he would be killed by police in his area. His house was also set on fire in the struggle that killed him. According to initial reports, his neighbors noticed smoke coming from his house around Read More…

Welcome to The Daily Wrap Up, a concise show dedicated to bringing you the most relevant independent news, as we see it, from the last 24 hours (4/28/21). As always, take the information discussed in the video below and research it for yourself, and come to your own conclusions. Anyone telling you what the truth Read More…

Originally posted October 15, 2015 “We have been terribly and systematically misled for nearly 70 years in the United States… marijuana was a legitimate medication.” Dr. Sanjay Gupta For more than 5000 years cannabis had been effectively used in Traditional Chinese Medicine (TCM). Cannabis is one of the 50 “fundamental” herbs of TCM, and is Read More…

One Reply to “Death Knell For Syria Pullout: “We Have To Protect Israel” Says Trump”