With increasing frequency, law enforcement personnel – including prominent sheriffs, police chiefs, and other command-level officers – are overtly stating that they are at war with the public they supposedly serve. Few have been as candid as a self-identified police officer and combat veteran named Brandon Obie.

“Alot [sic] of these thugs don’t realize that alot [sic] of us officers have spent alot [sic] of our time downrange stepping in the sandbox and are ready for a righteous fight if they want to bring one,” snarled Obie, his spelling reflecting the undemanding intellectual standards of his profession, in a comment posted on a law enforcement-oriented Facebook page. Identical sentiments were expressed by Major Travis Yates of the Tulsa, Oklahoma Police Department, who lectures nation-wide on officer safety issues and editor-in-chief of the publication Law Officer.

“We are at war!” exclaimed Major Yates. “The men and women behind the badge know it. Good leaders know it, and decent communities know it. For the safety of all of our men and women behind the badge, it is time our country knows it.” In what some might consider a remarkable specimen of hyperbole, Major Yates compares the emotional impact of recent episodes in which police officers have been murdered to the 9/11 attacks.

“I’ll never forget the mood at the squad meeting at 3 pm on September 11, 2001,” Yates recalls. “ I gathered with about 20 cops in the same room that we had deployed out of for years but this day was different.  Our country had been attacked and we were pissed. In fact, several from that day joined the military and others seriously pondered it.”

“Those thoughts and feelings came back like a vengeance this morning as I heard the news about Baton Rouge,” he continues.  “Yes, we all saw five officers killed in Dallas last week and multiple shot throughout the week but today’s news solidifies what just about no one wants to acknowledge – we are at war.”

Nearly a year ago, celebrity Sheriff David Clarke of Wisconsin’s Milwaukee County, an FBI-indoctrinated drug warrior who was awarded a Master’s Degree in “Security Studies” through the Naval Postgraduate School Center for Homeland Defense and Security in Monterrey, California, issued an undisguised call for action to “eradicate” Black Lives Matter activists and others giving voice to what he calls “anti-cop rhetoric.” Such people, he ranted, are “vulgar, vile, [and] vicious … slime” whom he characterized as “domestic terrorists.” He now demands that the public and the political class mobilize for a literal war of extermination – and he insists that citizens must rally to the defense and protection of the police officers whose advertised role is to protect them.

“It’s time to come to the aid of our police, our front-line soldiers, by calling this war, and not terrorism,” exhorted Clarke in an essay for The Hill. “Avoiding the truth through wordsmithing – the false narrative of the lone-wolf – is contemptible as more innocent officers perish while our politicians hem and haw. We as a people need to declare that we stand with the rule of law, and not with the false tales of the revolutionary Marxist forces, who most recently have rebranded themselves from Occupy Wall Street to Black Lives Matter.”

Those who refuse to enlist in that war are “accomplices” in league with “an enemy within our borders [and] without our borders,” Clarke insists.

It would be worthwhile to know if Sheriff Clarke would include within that indictment Wichita, Kansas Police Chief Gordon Ramsay, whose department, along with hundreds of local residents, participated in a July 17 First Step Cookout with local Black Lives Matter activists.

“The time’s come, we’ve got to rewrite the playbook on how we’re doing business and really change the way we’re doing things – but it takes two,” commented Police Chief Ramsay. “It takes all parties to come together to make a difference.”

Sheriff Clarke and other war-crazed Blue Privilege cultists would most treat Ramsay’s comments as evidence of collusion with the “enemy,” rather than a gesture of reconciliation by a chief who at some level aspires to be a peace officer devoted to serving the public, rather than the interests of his professional tribe. 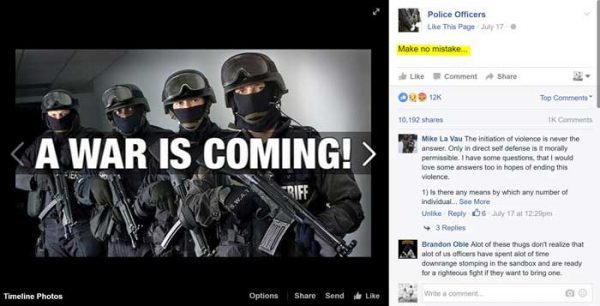 Posted to the Police Officers Facebook page, cops make an ominous call of war. “Make no mistake….A War is Coming”

Overt calls for civil war by police officials have been coupled with legislative action – at both the state and federal level – to designate police as a “specially protected class” for the purposes of hate crimes prosecution. At the same time, former federal prosecutor Larry Klayman, founder of Judicial Watch, has filed a class action lawsuit against President Obama, activist Al Sharpton,  Nation of Islam leader Louis Farrakhan, and the leaders of the Black Lives Matter movement, accusing them of fomenting a race war. In a fashion all but guaranteed to catalyze the racial antagonism he supposedly protests, Klayman purports to speak on behalf of a victim class that includes police officers, “Caucasians,” and “Jews.”

Klayman’s complaint alleges that the public criticism of law enforcement officers by the named respondents constitutes illegal “incitement.” He insistently describes – without plausibly documenting – a centrally directed criminal conspiracy led by Obama that threatens white citizens as a class.

“For too long, law enforcement and others, including white and non-white Jews and Christians, have remained silent, scared to speak and act, for fear of being branded racists over the fear of being threatened and harmed by defendants and their accomplices,” declares Klayman. “This must stop and justice must be done to preserve the integrity of our great nation and to avoid an all-out race war….”

In addition to injunctive relief, Klayman is demanding damages of $2 billion. The instrument has yet to be invented that could measure the infinitesimal chance that Klayman would win that lawsuit, but legal victory isn’t the objective. The purpose of that suit is to propagate a unified field theory of counter-insurgency on behalf of “Law and Order Conservatives” who are irrepressibly eager for a nation-wide paroxysm of state-sanctioned violence to cleanse the land of an internal “revolutionary enemy.” 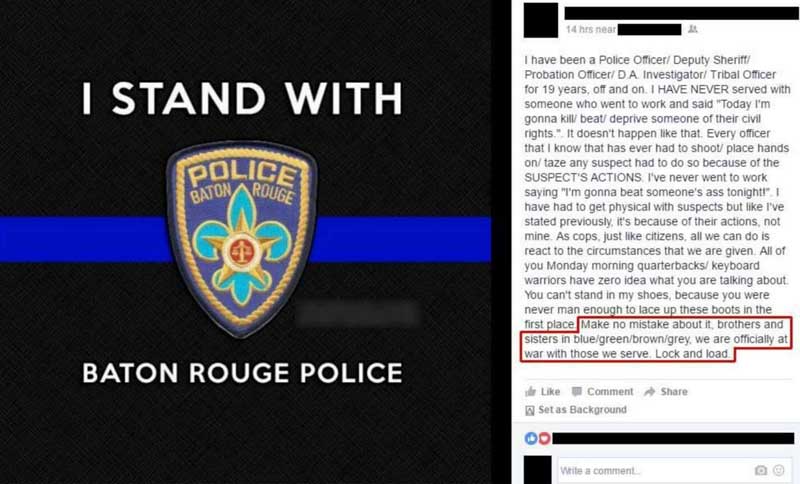 The Convenience of Plastic Is Killing Our Oceans

About 300 million tons of plastic are produced each year. In the US alone, about 30+ million tons of plastic waste is dumped into the solid waste system, including various plastic containers, bags and other types of packaging, with only about 10% being recycled. Plastic, which was once regarded as convenient and versatile, has actually Read More…

Fresh off the recent controversy surrounding its censoring of the iconic Vietnam-era “Napalm Girl” photo, Facebook finds itself in the midst of another censorship controversy surrounding yet another iconic photograph — this time of civil rights pioneer Rosa Parks. The historic picture of Rosa Parks being booked into jail in 1955, after being arrested for her Read More…

US History Of Chemical Weapons Use & Complicity In War Crimes

The world is once again witnessing the height of U.S. hypocrisy as members of the U.S. State Department ratchet up anti-Russian and anti-Syrian rhetoric surrounding the use of chemical weapons in Syria and the UK. Ambassador Nikki Haley has warned Syria, Iran and Russia that they will be held accountable for their pre-determined use of chemical Read More…