*This article is a summary of a larger article put together by J.B. Handley at Healthcare in America. It is a conglomeration of a wide body of recent research pieced together by a growing group of concerned scientists. For more information, please visit the website, vaccinepapers.org.

A study out of China is the first to test the effects of immune activation by vaccination (hep B/BCG) on brain development in rats. Results indicate vaccines containing an aluminum adjuvant (i.e., hep B) spike cytokine levels in the hippocampus region of the brain, in particular the cytokine interleukin-6 (IL-6), the key cytokine known for its dysregulating effect on neuronal circuitry and the key cytokine implicated in autism.

History of research into immune activation and autism

Before we get into the China study, it’s important to understand all of the previous research leading up to it.

In 2006, late Caltech scientist Dr. Paul Patterson and his colleagues were among the first to discover the implications of maternal immune activation and brain development in offspring.

In an article published in the Engineering & Science journal, titled “Pregnancy, Immunity, Schizophrenia, and Autism,” Patterson wrote that “brain-immune conversation actually starts during the development of the embryo, where the state of the mother’s immune system can alter the growth of cells in the fetal brain.”

Patterson and his team built on the work led by Carlos Pardo at Johns Hopkins, which discovered “neural inflammation” in postmortem examination of brains of patients with autism. Strangely, these autistic patients did not die due to any infections that would have caused the inflammation.

This research was the first to suggest “an ongoing, permanent immune-system activation in the brains of autistic people.”

In 2007 Patterson took this research further, publishing a study that found the culprit of this chronic brain inflammation — cytokine interleukin-6 (IL-6).

Cytokines are cell signaling molecules that aid cell to cell communication, stimulating the movement of cells toward sites of inflammation, infection, and trauma.

Patterson found that IL-6 was critical for mediating the behavioral and transcriptional changes in the neurology of the rat offspring.

This study was replicated by Patterson in 2012, which was more autism-specific, and reached the same conclusion: “These results indicate that [maternal immune activation] MIA yields male offspring with deficient social and communicative behaviour, as well as high levels of repetitive behaviours, all of which are hallmarks of autism.”

In 2014, the M.I.N.D. Institute at UC-Davis replicated Dr. Patterson’s work in rhesus monkeys and found the same results.

The next question, then, was what causes immune activation that would lead to increased levels of IL-6 in the brain?

Aluminum bioaccumulates in the brain

Aluminum adjuvant “activates” the immune system, which induces long-term immunity to antigens in the vaccine.

Dr. Chris Shaw at the University of British Columbia did extensive research on injected aluminum in 2007 and 2009, and found “the results reported mirror previous work that has clearly demonstrated that aluminum, in both oral and injected forms, can be neurotoxic. Potential toxic mechanisms of action for aluminum may include enhancement of inflammation.”

Concerns about the limited understanding of aluminum toxicity were further questioned by Dr. Lucija Tomljenovic in this 2012 paper.

It is somewhat surprising to find that in spite of over 80 years of use, the safety of Al adjuvants continues to rest on assumptions rather than scientific evidence. For example, nothing is known about the toxicology and pharmacokinetics of Al adjuvants in infants and children. On the other hand, in adult humans long-term persistence of Al vaccine adjuvants can lead to cognitive dysfunction and autoimmunity. Yet, in spite of these observations children continue regularly to be exposed to much higher levels of Al adjuvants than adults, via routine childhood vaccination programmes.

In 2013, French scientists demonstrated that aluminum adjuvant, when injected into the body of a mouse, ended up in the brain one year later.

In 2015, another study from Université Paris Est Créteil (UPEC) in France further supported this new view of aluminum adjuvant, showing that Al makes its way to the brain slowly, where it stays there, possibly forever.

Last fall, results published in the journal Toxicology sealed the deal on Al adjuvant, revealing that low, consistent doses of Al were most dangerous of all for neurotoxic effects. Larger doses produced granulomas at injection sites, which prevented the Al from spreading. Smaller doses did not produce this effect, causing changes in the brain and behavior.

The study authors stated that,

“the present study may suggest that aluminium adjuvant toxicokinetics and safety require reevaluation.”

And just last year, a study out of the Middle East looking at Alzheimer’s in rats found that aluminum produced a four-fold increase in IL-6 in the brain.

So we know that Al adjuvant causes on-going, increased levels of IL-6 in the brain. So what argument do the CDC and FDA use to justify aluminum being safe?

The difference between ingested Al and injected Al adjuvant

Currently, the FDA and CDC state that aluminum in vaccines is safe, based on this 2011 study.

This study erroneously concluded that aluminum from vaccines likely ends up in the body’s skeletal system. However, as the plethora of research previously mentioned shows, Al nanoparticles are not safely excreted or stored, they accumulate in the brain.

Another point to make here is that there is a difference between the aluminum discussed in the 2011 study (linked above) and the aluminum injected in vaccines. The CDC base their conclusions about Al safety on ingested, water-soluble aluminum salts, not the nanoparticle aluminum-hydroxide.

As Vaccine Papers explains, the two couldn’t be any further from the same.

It is natural and normal to ingest small doses of aluminum from food and water. Its not good for you, but the body has adequate defenses. Absorption of ingested Al is low, about 0.3%, so about 99.7% is eliminated in feces. Ingested aluminum is in ionic form (individual charged atoms), which is readily removed by the kidneys. Also, ionic aluminum is blocked from entering the brain by the blood brain barrier. The low absorption, rapid elimination by the kidneys and barrier to brain entry adequately protects the brain from aluminum.

In 2015, Li et al. out of Sun Yat-Sen University published a groundbreaking study that tied all of the latter research together.

Li et al. were the first to test the effects of immune activation by vaccination on brain development. All other studies of immune activation before this had used pathological conditions to mimic infection and induce fever, and therefore concerns about the transferability of the data had been in question until this study came out.

The study looked at the effects of bacillus calmette-guerin (BCG) vaccine (for tuberculosis) and hepatitis B vaccine on brain development in infant rats.

J.B. Handley sums up the results:

“There were three different groups of rats:

The BCG vaccine does NOT contain aluminum adjuvant and the impact on the rat’s brains from BCG was actually positive!

Vaccine Papers further detailed the implications of this study:

An important finding in the Li et al study is that some of the effects of hep B vaccine did not appear until age 8 weeks. This finding undermines claims of vaccine safety, which are almost always based on short-term outcomes of a few days or weeks. 8 weeks is a long time in rat development. 8 week old rats are almost fully mature adults. This suggests that adverse effects of vaccines may take years or decades to appear in humans, or can be life-long. This is consistent with what is known about immune activation and schizophrenia. Immune activation in the fetus can cause schizophrenia 20-30 years later.

Is this the proof we’ve been waiting for?

As you’ve just read, there is a growing body of research that paints an undeniable link between immune activation and autism. 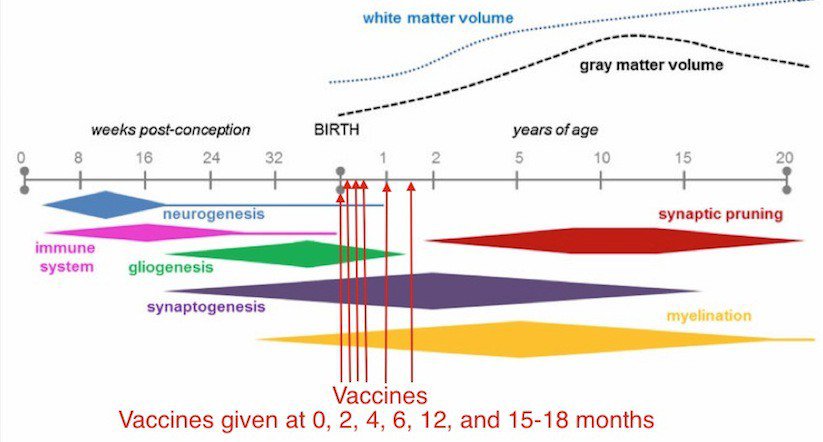 Chronic brain inflammation would also explain why many autistic children develop enlarged foreheads. It would perhaps explain why these children feel the need to bang their heads against walls, or why they become frustrated easily.

What about the gastrointestinal disorders autistic children frequently experience? If you guessed aluminum was the culprit, you are correct.

Here is a study from Nature that explains how aluminum causes inflammation in the gut and impairs gut function.

What about the MMR vaccine?

The MMR vaccine is the first live virus vaccine children receive (it’s typically given between age 12–18 months, most children have received 15–20 vaccines by then), and it’s a triple (measles, mumps, rubella) live virus.

For an immune system bathed in aluminum adjuvant and possibly already simmering with activation events, this triple dose might push a child right over the edge. This might explain the seizures (an extreme immune activation event) that sometimes follow the MMR appointment.

Only one ingredient (thimerosal) in one vaccine (MMR) has been studied in relation to autism in humans.

This picture sums the point up perfectly: 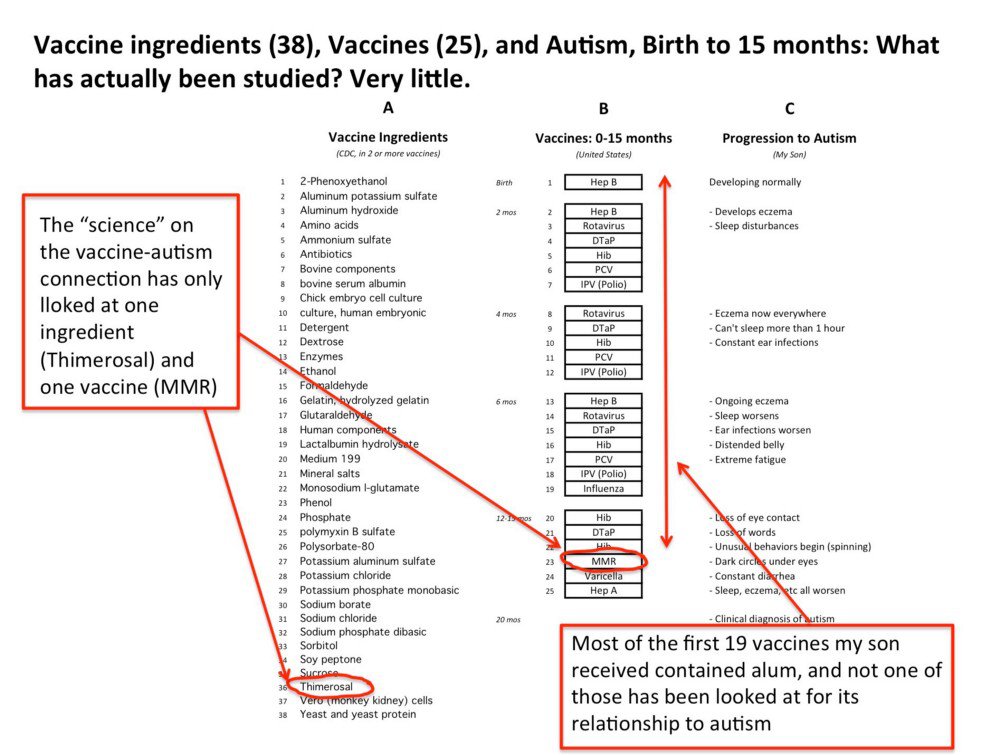 So where does all of this data leave us? Groundbreaking as all of this is, it is undeniable that there are many more questions waiting to be answered and more research needed.

Certainly we are in for a wild ride these next few years as the body of research for vaccine safety grows and as more people wake up to the fact that they’ve been lied to (get your popcorn ready).

For now, though, our only ally is to find our public voice, to spread the information to our circles, to involve ourselves in the discussions taking place online and in public, to let go of the emotional attacks and let the science boldly speak for itself. That is our moral responsibility.

The rest, I say, we leave to the adage about truth. It may have taken centuries and millions of lives to get here, and somewhere along the way we probably lost hope that it would ever arrive, but in the end the adage held true, that no matter how deep the lie or how ruthless the coverup, the truth always prevails.

Chemical agriculture companies have long been able to keep the toxicity of their products “secret” thanks to the EPA, but their devastating effects on human health are being exposed. (TFTP) An exhaustive new study is sounding the alarm over industrial pesticide use and its effect on human health. Pregnant women in California’s San Joaquin Valley have Read More…

The Catholic Church has refused to waive the immunity of one of their diplomats, after he was accused of possessing child pornography. (TFTP) The Vatican embassy in Washington D.C. has four diplomatic staff, and it is now admitting that at least one diplomat has been found with child pornography—but the church will not allow him to Read More…

A short while ago, the Syrian National Dialogue Congress was finished in Russia’s Sochi. The innovative format of the negotiations has become unique and unprecedented among all the sectors of the Syrian society. In the conflict’s history, no one has been able to gather the representatives of the official Syrian government, members of the ruling Read More…