“Imagine this scenario: Your perfectly healthy baby boy begins having 14 seizures a day, the day after receiving the Meningitis B Vaccine. You get no answers from your GP, or anybody else, for that matter. You make a video of your young boy to warn other parents that there might be something wrong with the vaccine. You think that’s only right: Let people see what happened to your boy and make their minds up on whether to opt out of that particular vaccine. You start looking into vaccines and conclude you won’t be vaccinating your child/children anymore. This results in your boy being removed from your home, because your anti-vaccine stance might harm him. Imagine it. Luke Maguire and Louise McKever don’t have to imagine that scenario. They’ve lived it for the last year.” – Richie Allen, radio presenter

In the last year, Luke Maguire and his partner, Louise, have been through a living hell. Ever since their child received a new meningitis vaccine called Bexsero, which caused a massive reaction within a day of receiving it, their son had suffered from a strange new twitch.

“At the two month vaccine, Bobby developed a twitch,”  Luke told radio host Richie Allen. “We knew straight away it was from the vaccines as it started that night. He was sleepy, floppy and pale. But after we alerted the nurses to the twitching, they assured us that vaccines were 100% safe.”

(This despite the verifiable documentation showing that vaccine courts have payed out over 3 billion dollars for vaccine injuries since 1998. Yet they say, “100%,” when even the government documents state very plainly that there can be very serious side effects, ask yourself why?)

After receiving no help from their GP, or anyone else in the medical field, the outspoken father started sharing their experiences on Facebook with a video of Bobby having his seizures. He hoped to warn other parents that Bexsaro might be unsafe. He said it caused a quick decline in their son’s health and gave him severe epilepsy, which he did not have prior to receiving the vaccine.

After receiving some mainstream press, the story became well-known in the UK and due to a Facebook video Luke made, went viral overseas. While Luke and Louise knew that the vaccine had caused severe harm and didn’t want to give Bobby any more, social services threatened to take Bobby away from their care if they didn’t continue to vaccinate him. Reluctantly, the parents had him vaccinated again. After this second lot, Bobby’s health deteriorated even further, which meant he was now having severe fits that sometimes lasted for minutes at a time.

Since receiving these vaccines, Bobby has visited the hospital over 55 times. Luke took to Facebook to share Bobby’s story with as many people as possible, and the family has sought help outside the medical system to try to improve their son’s health. They have been giving him organic food, have tried homeopathy and other natural remedies, and took him off dairy. Bobby’s health and seizures began to improve, and as you can see from the photo below, he looks a lot better. 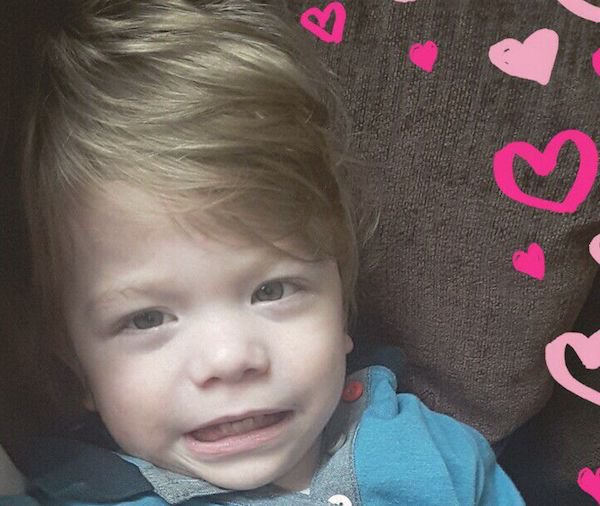 Is This Where We Are Heading: Speak Out Against Vaccines and Children Will Be Removed?

Earlier this week, Luke spoke with UK radio host Richie Allen to share what has been going on since Bobby had the vaccines, and what has happened since he started to speak out about them. He also described the last few weeks’ events, which ended in police raiding their house and removing Bobby at gunpoint. Luke shared this with Richie:

Bruises Seen on Child After Being Removed From the Home — Father Went to Take Photos, Then Social Services Phoned Police

Luke also shared that, since Bobby was taken, they have only had several short visits to see their son and are watched over the entire time. Luke also voiced his concerns about seeing bruises on his son’s body that were not there before the raid. When Luke took his phone out to take photos of the marks, social services immediately rang the police.

The video above (this is not the link for the original video but was added to YouTube after) is what started the trouble for the family. When it was sent out on Facebook it went viral, quickly amassing 3.5 million views.

There Are Concerning Issues With Bexsaro Vaccine

We must consider, is there any evidence to show that Luke may be right, that Bexsaro did cause his son’s health issues? Has it even been proven to be safe for use in infants?

In the article “Are Ineffective New Meningitis B Vaccines Causing Harm to Children?” world-renowned vaccine journalist Christina England shares some worrisome information she found in the vaccine insert, and reveals this vaccine has not been tested for use in infants: “In the UK, Bexsero is the main vaccination being recommended for babies between the ages of two and six months, a vaccine that, according to the manufacturers vaccine insert, has only been approved for individuals from the ages of 10 through to 25.”

Christina shared even more disturbing information from the vaccine insert, which clearly states it has not been tested for safety nor for effectiveness in children under the age of 10. In fact, if you take a look at the insert, which mentions the studies carried out, many of the people  it was tested on, were aged between 13-20 years.

Adverse reaction information was only recorded for  a 30 day period after the vaccine was given, which, I am sure you may agree with, is hardly long enough to prove its safety. Surely we should be studying vaccines for adverse reactions many months after they are given, or even better, for years?

In the UK, this vaccine is now given to infants starting in the first year of their life, where their body weight is incredibly low. Surely its common sense to consider; how do we know an infant can detox the vaccine chemicals that were tested in much older children and young adults?

How can a vaccine that has not been tested for use, or for safety in infants, but instead was tested on children much older (with much larger body weights), then be given to millions of infant children? How can our health agencies, which are supposed to act with the welfare of our children as their first priority, add a vaccine to the schedule whose safety has not been proven?

We as parents must demand to see the actual vaccine insert before we vaccinate, not just the glossy leaflet given to us. Otherwise, we will remain ignorant of the risks involved.

While the Australian family are under a gag order by the courts not to speak out about their son’s removal publicly — and I am not going to mention their names here — I urge you to take a look at this article about what happened to their child, who was also removed at gunpoint by Australian police.

The parents of this other boy have also taken to Facebook, urging people to make sure they know the risks involved in getting their children vaccinated. This family, who was not ‘anti-vaccine’ by any means and ensured their son received most of his infant vaccines, were feeding their son organic food. They also were giving him CBD oil which was helping his seizures massively decrease in severity.  They also prevented him from eating hospital food, which he seemed allergic to, after discovering it contained synthetic vitamins, sugars, and non-organic milk and nothing that was ‘real food.’

The video of this child being removed from his parents, also went viral, and the disturbing footage was seen where friends of the family who were at the hospital protesting, were pepper sprayed by Australian police.

We have also just heard that a young mother of 4 children in the USA has reported that all of her children were taken from her care after a visit to the hospital for one of the children.  She says that she believes that it’s because all four children are unvaccinated.

Please Listen to the Father’s Interview

There seems to be more and more cases of parents having their rights stripped away (you might like to check out the website medical kidnap which is as it sounds – a website dedicated to cases where parents lost their children to the hands of the medical industry) particularly when it comes to saying no to vaccines, or voicing concern about ones that have already been given.

At this stage, no one knows yet when, or if, Bobby will be returned to his parents.

Before commenting on this story, please listen to the interview with Luke speaking about what has happened to his family over this past year.

To look at other vaccine inserts, please click here.

In yet another act of “convenient” timing, Amnesty International has released a bombshell report alleging the execution by hanging of 13,000 Syrian prisoners by the Syrian government from 2011-2015. The report, “Human Slaughterhouse: Mass Hangings And Extermination At Saydnaya Prison, Syria,” which contains rather detailed descriptions of torture, rape, and execution as well as other Read More…

In order to determine the truth when it comes to the mainstream media’s coverage of American-led offensives in the Middle East, be sure to scroll down to the bottom of any article. This is where the most important information can be found. As can be seen in a BBC report on the U.S.-backed offensive to retake Read More…

“Let food be thy medicine and medicine be thy food,” the famous quote attributed to Hippocrates, is probably more important today than ever before as a handful of corporations, dubbed Big Food, gain more control over the food industry. Hippocrates’ statement brings up a very complex question: Is food as ‘healthy’ as it used to be, and can Read More…