One day after the most “significant escalation” in tensions between Israel and Syria/Iran, when an Israeli F-16 was shot down over the Golan Heights after it attacked a Syrian base which allegedly launched a drone into Israeli airspace, Israel appears to be “preparing for war in the North” according to the Jerusalem Post, which reports that the Jewish state has boosted its air defense in the region along the Syrian border following the “significant confrontation between the Jewish State, Syria and Iran.”

Witnesses cited by JPost reported seeing a convoy of missile-defense batteries heading north near the Israeli-Arab city of Baka al-Gharbiya. Other witnesses posted photos of several trucks carrying the batteries on central highways in northern Israel. 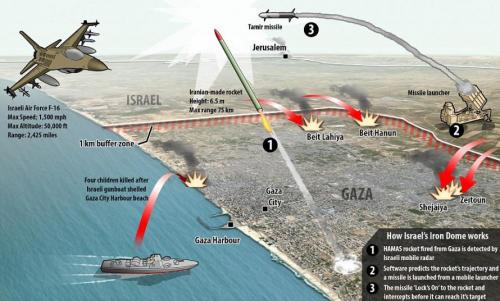 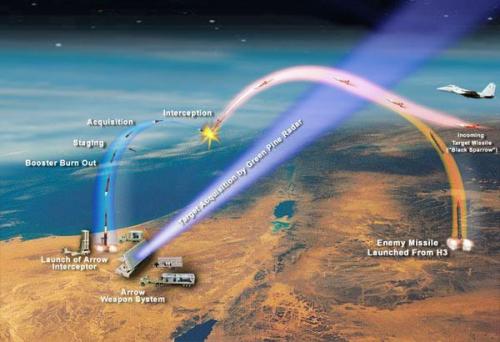 The Arrow system was first reportedly used in April when it was launched to intercept three surface-to-air missiles fired toward IAF jets by Syrian-regime air defense.

Meanwhile, according to AFP, Israel issued a stark warning on Sunday over Iran’s presence in neighboring Syria after the previously reported confrontation between the neighboring nations threatened to open a new and unpredictable period in Syria’s seven-year civil war, which now appears to also be engaged in de facto war against Israel.

In a dramatic escalation, Israel carried out major air raids in Syria on Saturday, including against what it described as Iranian targets – the first time it had publicly acknowledged doing so since the war began. The raids came after an Israeli F16 fighter was shot down by Syrian air defenses. The pilots survived, but it was Israel’s first loss of a warplane in battle since 1982.

Commenting on the escalation, Prime Minister Benjamin Netanyahu said at the start of Sunday’s cabinet meeting that “we inflicted on Saturday a heavy blow to Iranian and Syrian forces,” adding that “w made clear to everyone that our rules of engagement will not change in any way. We will continue to harm anyone who tries to harm us. This was our policy and this will remain our policy.”

Other Israeli ministers spoke of refusing to accept Iran entrenching itself militarily in Syria, as Netanyahu has said repeatedly. Tehran denies it is doing so.

And while several analysts said they did not expect a further escalation in the coming days, some spoke of the possibility of the Syrian war entering a new phase. While we have yet to see how oil will trade after the tension filled weekend, Israel’s stocks dropped as much as 1.3%, after Israel and Iran moved closer to confrontation in Syria.

Quoted by Bloomberg, Ilanit Sherf, head of equity research at Israel’s largest institutional investor, Psagot Investment House said that the drop in Israeli stocks on Sunday is “mainly due to developments in the security arena over the weekend,” and that “the confrontation in Syria was “irregular in a number of ways, and there is concern, of course, of further entanglement.”

In a surprise to some, Ofer Zalzberg of the International Crisis Group think tank said that Syria has become more emboldened to try to stop Israeli strikes inside the country, while Israel wants to maintain its ability to operate there when it sees fit. Imagine that: a country daring to defend its sovereignty.

Still, optimists believe that the latest escalation will remain contained: “I think this incident is more likely to be contained because fundamentally it is a gradual attempt to renegotiate the so-called rules of the game,” Zalzberg said, adding that Russia should mediate.

Furthermore, on Saturday, Israeli military spokesman Jonathan Conricus warned that Syria and Iran were “playing with fire”, but stressed that Israel was not seeking an escalation. “This is the most blatant and severe Iranian violation of Israeli sovereignty” in recent years, Conricus said.

After Saturday’s escalation, Iran dismissed Israeli “lies” and said Syria had the right to defend itself against Israeli attacks. Iranian foreign ministry spokesman Bahram Ghasemi said “Iran does not have a military presence in Syria, and has only sent military advisers at the request of the Syrian government.”

Meanwhile, Russia stressed the need to “avoid any measure that could lead to a dangerous escalation”.

As reported last night, Netanyahu spoke with both Russian President Vladimir Putin and US Secretary of State Rex Tillerson after Saturday’s confrontation.

Naturally, Washington backed Israel and blamed Iran for the escalation. Tillerson on Sunday begins a Middle East tour that will take him to Jordan, Turkey, Lebanon, Egypt and Kuwait.

Ultimately the decision whether a full-blown war emerges from the latest conflict will fall on Netanyahu and Putin: The Israeli PM has met regularly with the Russian president in recent months in a bid to convince Russia to keep Iranian forces away from Israeli territory. Russia and Israel have also established a hotline to avoid accidental clashes in Syria.

The phrase “think outside the box” is admittedly a bit of a cliché. Using it conjures up images of men in suits à la Mad Men trying to come up with the latest and greatest advertising slogan. In spite of that, thinking outside the box really does work. It helps us to approach problems in different Read More…

(SSC) Cannonball, ND — Over 300 police officers in riot gear, 8 ATVs, 5 armored vehicles, 2 helicopters, and numerous military-grade humvees showed up north of the newly formed frontline camp just east of Highway 1806. The 1851 Treaty Camp was set up this past Sunday directly in the path of the pipeline, on land Read More…

Editor’s Note: We have been catching a lot of flak for this title, and I wanted make clear that it was not our intention to imply that no one else had seen this interview, as many excellent and diligent independent journalists have written about, and referenced it. We are not trying to imply that we discovered something others had not, Read More…