As previewed last week in “Prosecutors Demand 2-Year Prison Sentence For Anthony Weiner,” with Weiner having already agreed to serve prison time for sending explicit message to a teenage girl as described in painful detail in “Prosecutors Unveil Full Details Of Anthony Weiner’s Pedophilia” today’s sentencing was merely a formality.

And, as Reuters reports, moments ago, Weiner was sentenced to 21 months in prison for his latest, and hopefully final, breakout of pedophilia, which according to Hillary Clinton may have cost her the election (along with everything else).

A Buzzfeed reporter was an eyewitness to sentencing and had the following observations:

Below is a courtroom sketch of Weiner crying as he heard the verdict: 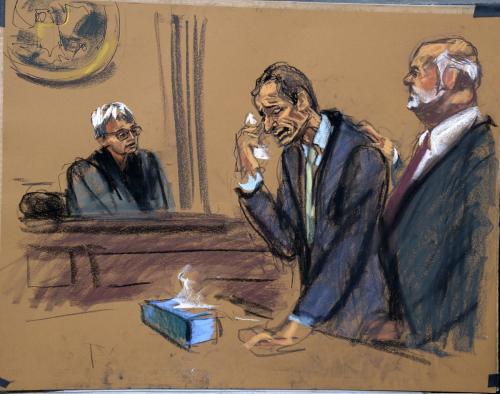 The 53-year-old former Queens representative pled guilty in May to sending lewd messages to a 15-year-old girl between January and March last year, including sexually explicit images and directions to engage in sexual conduct. As we reported last week, as part of the plea agreement, prosecutors had sought a prison sentence of between 21 and 27 months, but Weiner’s lawyers had argued he should have received a sentence of probation.

Monday’s decision marks an end to the criminal case that rocked US politics just days away from the 2016 presidential election, when former FBI Director James Comey briefly reopened the investigation into Hillary Clinton’s email server after agents investigating Weiner found emails from the Democratic candidate on a computer belonging to him and his wife — a top Clinton aide — Huma Abedin. The former secretary of state has blamed that decision, in part, for her stunning defeat to President Donald Trump.

Weiner dropped his head into his hand and wept as the sentence was announced by Judge Denise Cote. He must surrender to prison officials by Nov. 6. He sought to be spared from prison, telling Cote that he was “a very sick man for a very long time.” Weiner, weeping as he read from a written statement on a page he held in front of him, called his crime his “rock bottom.” When he is released, Weiner will be compelled to register as a sex offender.

Prosecutors reminded the judge that Weiner had sent the girl porn and got her to take her clothes off and touch herself on Skype. Assistant US Attorney Amanda Kramer on Monday urged Cote to give Weiner a significant prison sentence to end his “tragic cycle” of sexting. They added that Weiner should be sentenced to up to two years prison for what he did, and his victim’s motives should not influence his punishment ( the girl said she reached out to Weiner to see if he would take the bait). They also reminded the judge that Weiner has made similar claims of rehabilitation before after a series of embarrassing, widely publicized interactions with adult women before encountering the teenager online in January 2016, according to CBS New York.

And, as Buzzfeed adds, the prison sentence also represents yet another humiliating low for Weiner, “a once-popular and charismatic politician whose promising congressional career and 2013 campaign for New York City mayor were undone by his online behavior: accidentally tweeting an image of his bulging crotch, sexting with a woman while using the pseudonym Carlos Danger, the publication of a photo he sent to another woman in which his young son could be seen in bed next to him, and, finally, the revelation he had sexted with an underage girl.” 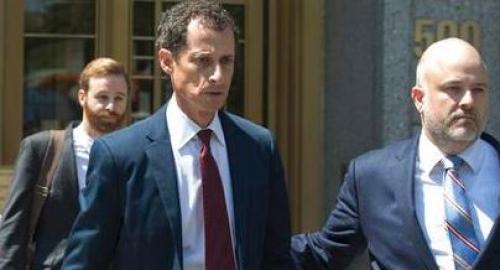 His actions have also cost him his family, with Abedin filing for divorce last year when the picture of their son in bed was splashed across the cover of the New York Post in August 2016.

“I accept full responsibility for my conduct,” a tearful Weiner told the court in May as he pled guilty. “I have a sickness, but I do not have an excuse.”

As reported last week, according to US prosecutors, the teenage girl first contacted Weiner via Twitter in January 2016, with their conversations becoming increasingly sexual. At one stage, Weiner sent the teen pornography, while he also used Skype and Snapchat to ask the girl touch herself for him, which she did. After their conversations stopped, the girl eventually sold her story to DailyMail.com, which published screenshots of the pair’s conversations.

While careful not to be seen to be blaming the teen for Weiner’s actions, his lawyers argued the girl was motivated by a desire to profit and to influence the election. “That argument should be rejected,” prosecutors urged the court, “and Weiner should be sentenced for what he did – not what motivated the Minor Victim.”

Ultimately the argument was not rejected.

The disgraced politician has since received treatment at facility for sex addicts after he said he hit “rock bottom.” “I entered intensive treatment, found the courage to take a moral inventory of my defects, and began a program of recovery and mental health treatment that I continue to follow every day,” he said in May.

But prosecutors had warned the judge to be skeptical of Weiner’s “claimed enlightenment and post-conduct rehabilitation” given his “widely-reported prior scandals.” “Weiner’s demonstrated history of professed, yet failed, reform make it difficult to rely on his present claim of self-awareness and transformation,” they wrote.

As a reminder, just weeks before the election, FBI agents seized Weiner’s laptop after finding emails from Clinton’s private email server on his hard drive, prompting Director James Comey to announce that the investigation had been reopened a week before the election. Clinton has blamed Weiner – along with Comey, Bernie Sanders, misogyny and everything and everyone else – for costing her the election.

Welcome to The Daily Wrap Up, a concise show dedicated to bringing you the most relevant independent news, as we see it, from the last 24 hours (8/4/19). As always, take the information discussed in the video below and research it for yourself, and come to your own conclusions. Anyone telling you what the truth Read More…

Welcome to The Daily Wrap Up, a concise show dedicated to bringing you the most relevant independent news, as we see it, from the last 24 hours (7/27/18). Far too much today is seemingly decided for us by those dictating what represents the political stance of either side of the two-party divide. It has become Read More…

During his final year in office, President Obama’s team significantly expanded efforts to search National Security Agency intercepts for information about Americans, distributing thousands of intelligence reports across government with the unredacted names of U.S. residents in the midst of a divisive 2016 presidential election. The data, made available this week by the Office of Read More…