The day the masses wake up and understand what the term “conspiracy theory” really means and recognize the truth about “conspiracy theorists,” who they are, what they stand for, the world ruling elite’s hold on humanity will be over. Their deceptive cover would have been blown wide open and indeed there will be consequences.

So, in light of the above, here are 9 indisputable truths about “conspiracy theorists.”

1. …have to put up with much ignorance, and as a knee-jerk reaction, baseless accusation of “conspiracy theory.” “Conspiracy theory” carries with it the deriding insinuation that there are no conspiracies (no conspiracy facts, just theory). Who could be so brainwashed, unquestioningly ignorant, or naïve enough to believe that no country has ever conspired??

2. Are conspiracy factualists. Using evidence they expose the truth about what’s really going on in the world. They expose the deceitful criminal perpetrator networks and authorities. Therefore, the term “conspiracy theorist” is a misnomer.

3. Give credible accounts of events, diligently challenging the official versions filled with lies, inconsistencies, fake boogeymen enemies and false paradigms … manufactured for power, profit and political gains. Many official versions of these false flag events have big enough holes in their stories to drive double-decker buses in and out of.

Then there are the eugenics, trans-humanism and depopulation agendas … these blatantly obvious conspiracy facts are there for all to see.

4. As a consequence of 3, are perceived by the ruling elite and their associates as a threat. In order to get away with their crimes and deception they know that “conspiracy theorists” have to be ignored, invalidated, or ridiculed by the masses: 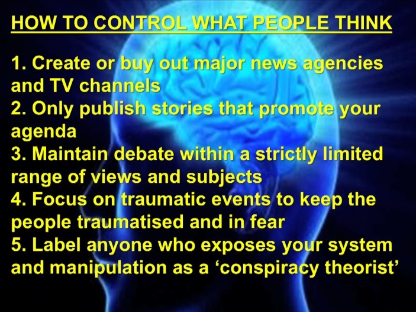 The term “conspiracy theory” was originally a 1960s’ CIA invention. Over the years the ruling elite’s owned and controlled intelligence agencies such as the CIA and their mainstream media propaganda machine have used this term to expand its effect of negatively stigmatizing “conspiracy theorists” so that the masses will never realize that these people were right all along.

5. …therefore are truther messengers running the risk of getting shot. They are targeted individuals. Targeted by the likes of the UK’s ex-Prime Minister David Cameron, calling them “non-violent domestic extremists” as one of the many attempts to silence such people who have seen right through the phony baloney.

6. Are not “coincidence theorists.”  How can anyone dismiss the overwhelming number of coincidences pointed out by “conspiracy theorists” to be indicators of crimes and cover-ups tied in with false flag events?  Is it really a mere coincidence that it’s always the elite few; the banksters, the puppet senior politicians, the owner/controllers of mega-corporations that benefit from these events? 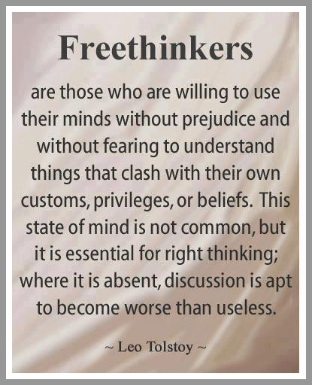 7. Are the freethinking minority able to think for themselves against the backdrop: a world full of sheep-like people going into agreement with the general consensus of the masses while blindly accepting authority viewpoints blurted out in the ruling elite’s bought-off, owned and controlled mainstream media… 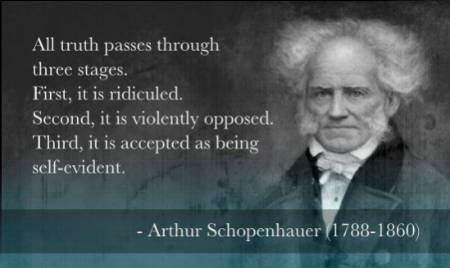 8. Consistent with Arthur Schopenhauer’s statement, in time, with their conspiracy facts, could be the majority stage-3: “…accepted as being self-evident.”

9. …Are who the world’s needs most: Unstoppable, increasing in numbers and gathering in momentum. They are laudable investigators.

They are peaceful activists, spreading the truth about what’s really going on in the world. Many do their inner work to co-create a turnaround, away from the planned doom and gloom.  Thus, it is their intention to co-create freedom: A new paradigm experience, a world that truly makes a difference for everyone.

A shift in mass consciousness is the underlying key principle. This is how these consciously awakened individuals will bring about that freedom.

Not an attempt at an exhaustive A-Z account, I realize, but that concludes my 9 indisputable truths about “conspiracy theorists.”

China has just opened a new railway link with Iran and CNPC is set to fill the void left by France’s Total if and when they leave the South Pars field. It looks like the US pulling out of the Iran deal is win-win for China and the BRICS world order…and the engineered destruction of Read More…

Media Worried Too Many Americans Will Question Legitimacy Of 2016 Election

2016 is the year many, many Americans began to question whether or not our elections, and to a lesser extent, our democracy (insert “it’s a constitutional republic, big difference!” here) are rigged. As I’ve argued many times in the past year, there is plenty of evidence suggesting these skeptical Americans are, indeed, onto something with Read More…

A controversial bill that will prevent states from creating their own labeling standards for genetically engineered foods has passed the House of Representatives and now heads to President Obama’s desk.  On Thursday, the U.S. House of Representatives passed a measure aimed at creating a federal standard for labeling genetically engineered or modified foods. Genetically modified Read More…