Writing for a publication called “The International Forecaster,” it’s pretty hard not to throw my hat in the ring with the other prognosticators who are peddling their predictions and pontificating on the prospects for the pursuing year. As I’ve noted before, these “year ahead” articles are not really about crystal ball predictions of specific future events. Instead, the hope is that the act of recognizing and examining current trends will enable us to find ways to deflect or divert the course of history away from a future we’d rather not see and toward possibilities we wish would transpire.

With that spirit in mind, I find it more and more difficult to shake the conviction that technological developments will shape the narrative of 2017. If this does turn out to be so, it would hardly be the start of some new, never-before-seen trend. Yet even though it’s no longer novel to observe that the pace of technological change is accelerating, there are certain inflection points where those changes stop being so theoretical and start impacting our daily lives. I contend that we are living through one such inflection point right now and that will manifest in all sorts of ways over the next year.

So today let’s examine some of the tech trends that will be making headlines in 2017.

As I discussed with Rick Falkvinge in our recent interview on Rule 41, there is a murder investigation underway in Benton County, Arkansas that could be a very worrying sign of things to come. The case revolves around the November 2015 death of Victor Collins, who died in a hot tub in the home of one of his co-workers, James Bates. Believing that clues about his death were likely recorded by Bates’ Amazon Echo, prosecutors are now pressuring Amazon to turn over records of whatever it may have recorded on that day.

For those who don’t know, Amazon Echo is an always-on digital assistant that, at least officially, only begins responding to voice commands and connecting to Amazon’s cloud servers when it hears the wake-up word, “Alexa.” If this is true, then it is unclear what information prosecutors could possibly hope to collect from the device. But since the device has to be constantly listening in order to hear the wake word, it is feasible that it records and sends more data back to Amazon. For its part, Amazon has turned over Bates’ account holder information and purchase history to prosecutors, but has so far refused to give them access to the server data, objecting to overbroad intrusions on customer privacy.

Ominously enough, though, Bates’ original arrest stems largely from data that police collected—without a warrant—from another of his “smart” devices: a smart water meter. The data from the meter says that Bates used a significant amount of water between 1 and 3 AM on the night of Collins’ death. The prosecutors are arguing that this water was used to spray down the patio to remove evidence of the murder. There’s just one problem with that: Bates contends that he filled the hot tub with a similar amount of water earlier in the day, and that that water usage is not reflected in the meter’s logs. In other words, it is entirely possible that an AM/PM confusion in the smart meter data may have led to a man being falsely accused of murder.

As chilling as all of this is, however, it gets even worse…

So your smart devices are constantly listening and recording data about you, your movements, your habits, your conversations and who knows what else. But it isn’t just police who are going to be looking to get that data for use in criminal investigations; criminal attackers and government stooges (but I repeat myself) will also be looking to get their filthy hands on that digital lucre.

As for the criminals, it isn’t difficult to see why they would be interested in such a gold mine of information on your habits and movements. Blackmail is one obvious use for gathering potentially incriminating or embarrassing information about what happens in your home behind closed doors. Monitoring movements and activities to identify times when your house can be safely broken into is another. 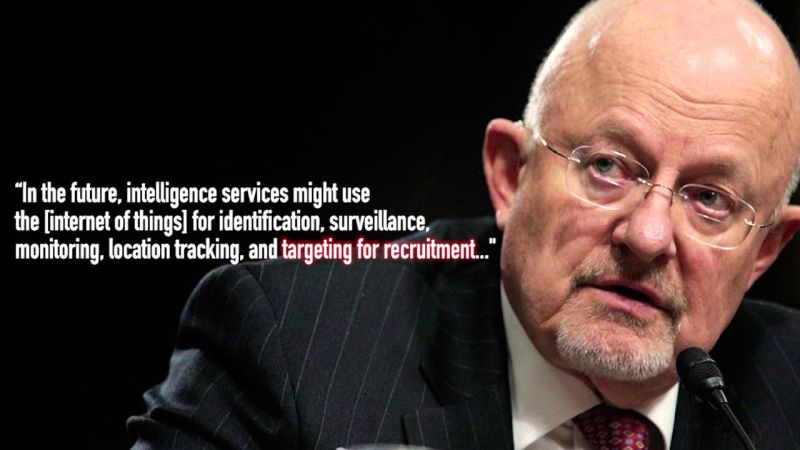 Another potential use criminal networks might have for your “smart” appliances involves a more tangential prize: the ability to use your hacked devices in a botnet for Distributed Denial of Service (DDoS) attacks, spamming and other malicious purposes. Various people have been ringing the alarm bell about this downside to the “Internet of Things” for years, but those fears were realized in a startling way last September when the largest DDoS attack on record was traced back to a botnet of zombie routers, video recorders and other networked appliances.

And as for the government…Well, veteran Corbett Reporteers do not need to be told the whys and wherefores of the government’s interest in devices that are essentially recording all of your movements, activities and conversations at all times. As I pointed out three years ago in my video on Smart Tyranny, ex-CIA director David Petraeus openly bragged about how these smart technologies would allow intelligence agencies to spy on everyone in their own homes, using their own appliances. Speaking at a summit for In-Q-Tel, the CIA’s venture capital firm, Petraeus noted:

“Items of interest will be located, identified, monitored, and remotely controlled through technologies such as radio-frequency identification, sensor networks, tiny embedded servers, and energy harvesters.[…]In practice, these technologies could lead to rapid integration of data from closed societies and provide near-continuous, persistent monitoring of virtually anywhere we choose.”

Big Brother would be jealous. So are you still happy about that Amazon Echo you got for Christmas?

We all knew it would be coming. In fact, it’s been arriving in drips and drabs for years now.

Ecuador has banned it. Bangladesh has criminalized it. The Norwegians have (rather unsurprisingly) found a way to tax it. From the moment that the idea for a virtual, decentralized currency capable of crossing national borders in the blink of an eye and for a fraction of a penny was conceived, everyone knew that government regulators would be itching to find a way to dig their claws into it. But nearly a decade on from the creation of bitcoin, there are still numerous countries where regulators haven’t yet decided to take any official position on its legal status.

2017 will likely be the year where that all starts to change. For starters, bitcoin is no longer a mere flash-in-the-pan or underground novelty. With a market cap exceeding $14 billion and with the price of a single bitcoin having cracked the $1,000 mark on January 1st (and promptly falling back below that mark earlier this week), there can be little doubt that government regulators are going to be especially keen to take on the task of regulating bitcoin transactions in the coming year.

This is especially so after 2016 saw the emergence of a perfectly predictable pattern: In any country where significant monetary destabilization or stringent capital controls are implemented, a surge in interest in bitcoin follows shortly thereafter.

India suddenly demonetized 80% of its currency in circulation in November…and the rupee-bitcoin trading volume exploded through the roof. 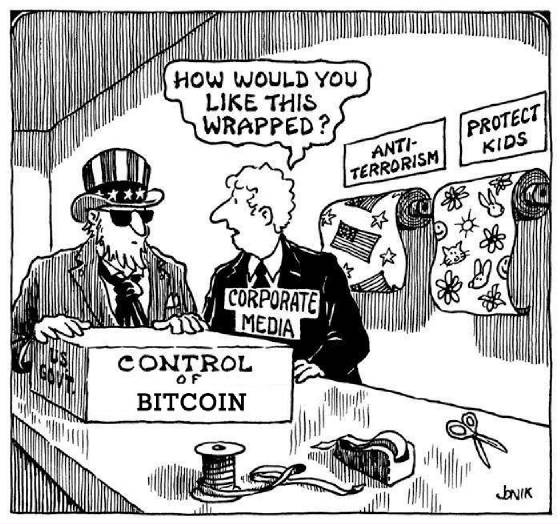 China has spent the last year putting more and more restrictive capital controls in place to prevent the hemorrhaging of yuan out of the country…and Chinese demand has pushed bitcoin to record highs.

So any would-be social engineer worth his salt, realizing that complete control of the money supply is the core component of any attempt to control a nation, must be looking at bitcoin as less of a quaint novelty and more as a genuine competitor for centralized control of existing currency. Of course, bitcoin itself cannot be regulated, but the exchanges and wallets and bitcoin-dependent businesses can be, and it will be increasingly difficult to use your bitcoin in the way that you do today without some overzealous government regulator catching wind of it.

And it’s not just bitcoin; all blockchain technologies are likely to come under increasing government scrutiny. As Coindesk points out in its own 2017 prospective:

“In the US, the Federal Reserve recently released a research paper focusing on distributed ledger technology in which it stated, among other things, that analysis needs to be done to determine whether new laws and regulations are required to accommodate the technology. In addition, in early December, the US Treasury Department’s Office of the Comptroller of the Currency announced that it would offer national charters for FinTech firms, opening up its proposal to public comment. Elsewhere, South Korea’s Financial Services Commission and Switzerland’s Federal Department of Finance (FDF) have explicitly stated that they will introduce new regulation in 2017.”

If you thought the Coinbase-user debacle of 2016 was worrying, you ain’t seen nothing yet.

Sadly, I could go on with the worrying tech trends that will be gaining steam in 2017.

There’s the accelerating trend of the automation of the workforce that I identified in the 2017 edition of New World Next Year.

There’s the CRISPR technology that is opening the Pandora’s box of gene editing and designer life.

There’s even “new” (?) research into how old people can live longer by consuming the blood of the young. (And you wondered how Kissinger, Rockefeller and the Queen have lived so long.)

All of which can lead one to the pretty depressing conclusion that the technocratic control grid is here and there’s nothing we can do about it. While I can certainly sympathize with such a position, I don’t adhere to it myself. As I will explain next week, while 2017 may be a dark time for free humanity in their struggle against the technocrats, the long-term trends are actually toward an ungovernable world of decentralized, sovereign individuals who use the double-edged sword of technology against the technocrats themselves! Stay tuned…

Iranian President Hassan Rouhani warned this week that Tehran may abandon the 2015 nuclear deal, also known as the Joint Comprehensive Plan of Action (JCPOA), within hours if the U.S. continues imposing new sanctions. In a speech to parliament on Tuesday, Rouhani said Donald Trump was “not a good partner.”’ “Those who try to return to Read More…

Welcome to another episode of TLAV Political Roundtable where we break down the week of American politics, and discuss its implication on American life, and the world. In this episode we dissect the temporary refugee ban, Donald Trump’s purposed “safe zones,” and many other topics. In this week’s Devil’s Advocate segment we discuss Donald Trump Read More…

Yes, You Have The Right To Talk Back To The Government, But It Could Get You Killed

“The freedom of individuals verbally to oppose or challenge police action without thereby risking arrest is one of the principal characteristics by which we distinguish a free nation from a police state.” — Justice William J. Brennan, City of Houston v. Hill What the architects of the police state want are submissive, compliant, cooperative, obedient, Read More…