The text of Hillary Clinton’s speeches to Goldman Sachs have now been published. Go ahead, read them for yourself. It’s perfectly legal to do so, despite what the mainstream media liars would like you to believe.

When you do, you will find a transcript of an interesting conversation between Hillary and Lloyd Blankfein (yes, that Lloyd Blankfein) that took place in October 2013 at Goldman’s “Builders and Innovators Summit” in Arizona. After drawing on her expertise to enlighten the audience about diplomatic hotspots and trends in American foreign policy, Clinton focuses in on the South China Sea:

“48 percent of the world’s trade, obviously that includes energy but includes everything else, goes through the South China Sea.  Some of you may have seen the long article in the New York Times Magazine on the South China Sea this past weekend, an issue that I worked on for the entire time was in the State Department because China basically wants to control it.  You can’t hold that against them.  They have the right to assert themselves.  But if nobody’s there to push back to create a balance, then they’re going to have a chokehold on the sea lanes and also on the countries that border the South China Sea.”

In conveying her arguments with the Chinese about their claims to the South China Sea, she tells the crowd that the US has a claim to all of the Pacific: “We liberated it, we defended it.[…]And we could call it the American Sea, and it could go from the West Coast of California all the way to the Philippines!”

But it is in a separate conversation about China, this time at Goldman’s June 2013 “IBD CEO Annual Conference” in South Carolina, that Clinton lays bare the extent of America’s imperial hubris in the Asia-Pacific. Discussing Washington’s strategy for dealing with China in the context of the growing North Korean missile threat, Clinton confessed that:

Needless to say, the idea of “ring[ing] China with missile defense” is nothing new to anyone…least of all the Chinese. In fact, the story of the US military’s highly controversial deployment of a “THAAD” (Terminal High Altitude Area Defense) system in South Korea is literally ripped from today’s headlines. But whereas that deployment has always been framed as a necessary counter to North Korea’s growing military capabilities, no one has been under any delusions about which way these “defense” systems are pointing. But now we have Clinton admitting in her own words that this is part of a strategy to “ring China,” making future US-China diplomacy a tad more uncomfortable (to say the least). 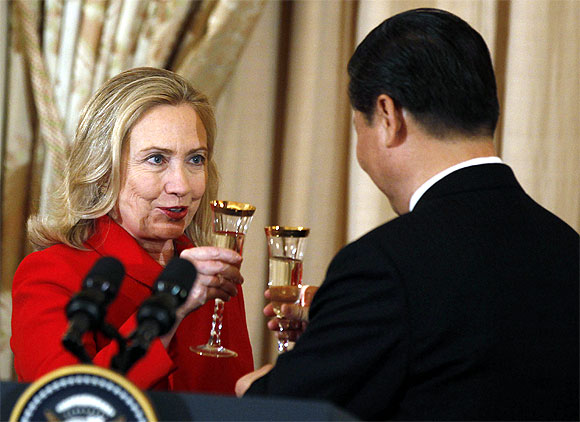 Now let’s be clear; absolutely none of this is in the least bit surprising. It isn’t shocking, or some top level secret, or some piece of Machiavellian behind-the-scenes manipulation that Clinton doesn’t want you to know about. In fact, it is nothing but a restatement of Clinton’s infamous 2009 announcement of America’s “Asia-Pacific Pivot,” the US government’s plan to refocus its attention on its Pacific “partners” (i.e. enemies, frenemies and imperial subjects)…that was immediately derailed and overshadowed by the illegal wars of aggression in Libya and Syria.

But this is the point: It is a restatement and seeming re-commitment to that plan, four years after its announcement and one year after Clinton stepped down as Secretary of State. Clinton’s tight focus on China and the South China Sea naval disputes in particular tell us that the Asia-Pacific Pivot is still very much a priority for the soon-to-be-annointed “leader of the free world.” And from the perspective of the average Chinese person, that must sound like a not-so-thinly-veiled threat.

Fakery and trickery are not solutions; they are a form of self-delusional madness that destroys the nation’s ability to face reality squarely and choose real solutions, no matter how painful the choice and path might be. The nation has lost its common sense, its soul and its sanity. Can we summarize the source of this remarkably pervasive madness? Our efforts Read More…

2 Replies to “War With China: What Hillary Told Goldman”