Based entirely on claims made by “anonymous intelligence officials,” the US is claiming that Assad has approved the use of chlorine gas against the people in Idlib, which, if Americans care to remember, was the exact same way this country was led into a war with Iraq under knowingly false pretenses — otherwise known as a lie.

Update: Trump’s national security advisor John Bolton indicated during a speech on Monday that the United States, Britain, and France have agreed that another use of chemical weapons by Syria would be taken “very seriously” and will require a much “stronger” and harsher response.

His remarks came during what’s being described as his first major speech since joining the Trump administration at an event hosted by the conservative Federalist Society at a Washington, D.C., hotel. 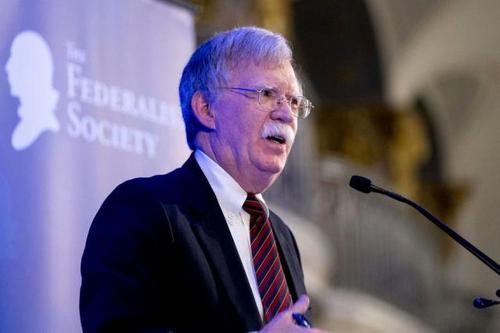 Meanwhile Turkey has also weighed in regarding the ongoing Russian and Syrian allied assault on Al Qaeda-held Idlib, which began days ago when Russia initiated a bombing campaign ahead of an imminent and massive Syrian Army ground offensive.

Turkey’s defense minister has called for all air and ground attacks on Idlib to stop immediately, calling for an urgent ceasefire to be established, according to Turkish state media.

Bolton’s warning of a “third chemical attack” today comes on the heels of a Sunday Wall Street Journal story citing unnamed U.S. officials who claim to have intelligence showing Assad “approved the use of chlorine gas in an offensive against the country’s last major rebel stronghold.”

It appears the Trump White House is now signalling that an American attack on Syrian government forces and locations is all but inevitable.

But this time the stakes are higher as Russia has built up an unprecedented number of warships in the Mediterranean Sea along the Syrian coast in response to prior reports that the U.S., France, and Great Britain could be preparing an attack.

At this point there’s not even so much as feigning surprise or suspense in the now sadly all-too-familiar Syria script out of Washington.

The Wall Street Journal has just published a bombshell on Sunday evening as Russian and Syrian warplanes continue bombing raids over al-Qaeda held Idlib, citing unnamed US officials who claim “President Bashar al-Assad of Syria has approved the use of chlorine gas in an offensive against the country’s last major rebel stronghold.”

And perhaps more alarming is that the report details that Trump is undecided over whether new retaliatory strikes could entail expanding the attack to hit Assad allies Russia and Iran this time around.

That’s right, unnamed US officials are now claiming to be in possession of intelligence which they say shows Assad has already given the order in an absolutely unprecedented level of “pre-crime” telegraphing of events on the battlefield.

And supposedly these officials have even identified the type of chemical weapon to be used: chlorine gas.

The anonymous officials told the WSJ of “new U.S. intelligence” in what appears an eerily familiar repeat of precisely how the 2003 invasion of Iraq was sold to the American public (namely, “anonymous officials” and vague assurances of unseen intelligence) — albeit posturing over Idlib is now unfolding at an intensely more rapid pace:

Fears of a massacre have been fueled by new U.S. intelligence indicating Mr. Assad has cleared the way for the military to use chlorine gas in any offensive, U.S. officials said. It wasn’t clear from the latest intelligence if Mr. Assad also had given the military permission to use sarin gas, the deadly nerve agent used several times in previous regime attacks on rebel-held areas. It is banned under international law.

It appears Washington is now saying an American attack on Syrian government forces and locations is all but inevitable.

And according to the report, President Trump may actually give the order to attack even if there’s no claim of a chemical attack, per the WSJ:

In a recent discussion about Syria, people familiar with the exchange said, President Trump threatened to conduct a massive attack against Mr. Assad if he carries out a massacre in Idlib, the northwestern province that has become the last refuge for more than three million people and as many as 70,000 opposition fighters that the regime considers to be terrorists.

The Pentagon is crafting military options, but Mr. Trump hasn’t decided what exactly would trigger a military response or whether the U.S. would target Russian or Iranian military forces aiding Mr. Assad in Syria, U.S. officials said.

Crucially, this is the first such indication of the possibility that White House and defense officials are mulling over hitting “Russian or Iranian military forces” in what would be a monumental escalation that would take the world to the brink of World War 3.

“Lots of evidence”
Trump regime not even trying, they’re just phoning this disinformation campaign in pic.twitter.com/YD9MtXK97c

The WSJ report cites White House discussions of a third strike — in reference to US attacks on Syria during the last two Aprils after chemical allegations were made against Damascus —  while indicating it would “likely would be more expansive than the first two” and could include targeting Russia and Iran.

During the debate this year over how to respond to the second attack, Mr. Trump’s national-security team weighed the idea of hitting Russian or Iranian targets in Syria, people familiar with the discussions said. But the Pentagon pushed for a more measured response, U.S. officials said, and the idea was eventually rejected as too risky.

A third U.S. strike likely would be more expansive than the first two, and Mr. Trump would again have to consider whether or not to hit targets like Russian air defenses in an effort to deliver a more punishing blow to Mr. Assad’s military.

Last week the French ambassador, whose country also vowed to strike Syria if what it deems credible chemical allegations emerge, said during a U.N. Security Council meeting on Idlib: “Syria is once again at the edge of an abyss.”

With Russia and Iran now in the West’s cross hairs over Idlib, indeed the entire world is again at the edge of the abyss.

“The crisis in today’s health care system is deeply rooted in the interwoven history of modern medicine and corporate capitalism. The major groups and forces that shaped the medical system sowed the seeds of the crisis we now face. The medical profession and other medical interest groups each tried to make medicine serve their own Read More…

Blaming Russia For Everything Is Very Dangerous; And Here Is Why

The geopolitical situation currently surrounding the 2016 Presidential Election, is no doubt relevant, and quite ominous. Yet wartime is big business for many involved; in fact, war can be seen as a saving grace for countries in the midst of a financial dilemma or social and political upheaval, similar to the state in which the US currently Read More…

The Pineal Gland: A Modulator Of Human Consciousness?

Often referred to as the third eye, the seat of the soul, or the epicenter of enlightenment; the pineal gland has been something of a mystery when it come to science, yet this small gland in the brain has earned high praise amongst many esoteric/metaphysical schools of thought as being quintessential to spiritual development. What’s Read More…