Remember 2016? Remember Brexit? And Pokemon Go? And the (s)election circus? And the Russian propaganda hype?

How could you forget? These stories, along with the usual mix of staged terror events, staged leaks, and the general setting of the stage for the new(est) world order, will forever be cemented in the minds of an increasingly-traumatized public as the touchstones of a year that seemed to spiral out of control.

But of the many blink-and-you-probably-missed-it stories that slipped through the cracks of the 24/7 news cycle over the past year, perhaps none is quite as portentous as the story of the USNS Bowditch. 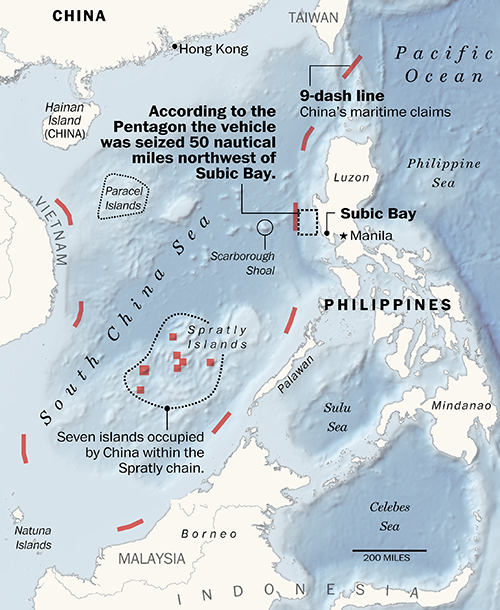 The USNS Bowditch is an oceanographic survey vessel that was deployed by the US Navy in the South China Sea. On an otherwise routine mission to recover two unmanned naval drones in an area 50 miles from Subic Bay in the Philippines last month, the Bowditch encountered a problem. The vessel was approached by a Chinese Dalang-III class submarine, which dropped a boat in the water 500 yards from the Bowditch and scooped up one of the drones. The Bowditch radioed the Chinese ship to ask for the drone back, but the Chinese responded that they were busy and promptly sailed away.

These actions kicked off five days of diplomatic tit-for-tat, including some goading tweets from President-elect Trump and some biting op-eds from China’s mouthpiece media. The Americans said this was a dangerous and unnecessary provocation, as the drone is a non-military vessel and only collects oceanographic data. The Chinese protested that they did nothing wrong and that the vessel was within the bounds of their territorial claim to the South China Sea. It seemed as if this little skirmish could be the start of a major international incident.

…But then the Chinese returned the vessel after some “friendly consultations” between the two countries, and that was apparently that.

On the surface this isn’t much of a story at all. But dig deeper and you’ll find that the incident reflects all of the trends we can expect to see taking shape during the Trump era. It takes place in the increasingly crowded (and contested) South China Sea. It stops just short of actual military confrontation between China and the US. And it features chest-thumping from both Trump and Beijing, with neither side exactly backing down. Welcome to the next four (to eight) years of life in the Asia-Pacific.

None of this is remotely surprising to anyone who has been paying attention, of course. So far Trump has made every possible signal that China is going to be the boogeyman for his administration—not Russia, as Hillary’s neocon supporters had planned to target.

And he hasn’t even been sworn in yet. All of this has led to the term “trade war” being bandied around by beltway pundits more often in the past few months than in the past few years (or decades).

The ironic thing about this is that if Trump does indeed go after China he will merely be furthering the agenda that Clinton herself fumbled during her time as Secretary of State. It was, after all, her speech in Honolulu in 2011 that formally kicked off the “Asia-Pacific Pivot,” which was going to be the Obama administration’s big foreign policy achievement of saying bye-bye to the Middle East and ni hao to the Asia-Pacific. At the time, the Pentagon bigwigs boasted that the Asia-Pacific was going to be one of the two main areas of operation for American armed forces in the coming decades. They even rolled out their AirSea Battle plan as a way to justify the gazillions of dollars that would inevitably be wasted (or “lost“) while pursuing this goal.

…but then they hit a little snag in a place called Syria and that whole Asia-Pacific pivot got left by the wayside. As we now know from the leaked Goldman speeches, Clinton was still itching to get her claws into the South China Sea even after leaving her job at the State Department. However, the best laid plans of mice and psychopaths gang aft agley and she never got her way. 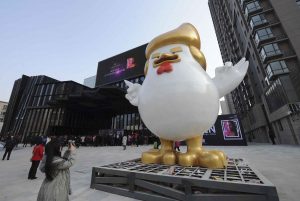 The only question left is whether Trump will get his way.

Well, OK, there’s one more question: Is Trump really going to be targeting China, or is this more bluster and bravado—or a ruse of a different sort? Although the table is being set for a China/US trade war (at the very least) in the near future, there are signs that this may not happen after all.

For one, we know that Henry “China and the New World Order” Kissinger has the President-elect’s ear, and he has already warned us that Trump will renege on many of his promises (surprise, surprise!).

And just to throw another monkey wrench in the works, it seems that Trump is turning into an unlikely retail mascot in China of all places. Perhaps it’s not so unexpected after all, as the Chinese people remain, despite (or because of?) the best efforts of the CPC, obsessed with and beholden to the almighty yuan, especially in its golden variety. And The Donald is famous for being wealthy and fond of gold. Perhaps it’s a natural fit after all.

Whatever kind of con is being played here, it’s still likely that Trump will be using Beijing as an easy punching bag to mollify his angry, working-class base. So maybe the drone incident is the perfect sign of things to come, after all: It serves as an ultimately meaningless tiff that plays into the nationalism and bellicose warmongering of both sides without actually costing either side anything. Let’s hope that’s what we’re in for, because the alternative—a serious conflict involving weapons of mass financial destruction or even military confrontation—is too ghastly to contemplate.

Despite the IDF’s killing of over 160 and the wounding of 17,000 unarmed Palestinian protesters, and despite the great international outcry this has caused, the Israeli Supreme Court has ruled that the IDF’s rules of engagement are in line with “international parameters.” GAZA CITY, PALESTINE — The Israel Defense Forces (IDF) have killed at least 35 Read More…

A new study highlights why a growing number of parents are skeptical about the safety of the coming COVID-19 vaccine, and vaccines in general. In recent months the mainstream corporate media has begun telegraphing their intent to divide the American population between those who believe in bodily autonomy and health freedom, and those who support Read More…