This afternoon, during a speech in Indianapolis, President Trump was expected to reveal, for the first time, the details of the long-anticipated Republican tax reform proposal that calls for substantial business and individual tax cuts. But in a political era where every little thing is leaked to the media, we no longer have to wait for presidential speeches to learn the details of key pieces of legislation. As such, below is a 9-page summary of Trump’s tax plan courtesy of Bloomberg.

Here are the highlights:

The Trump Administration, the House Committee on Ways and Means, and the Senate Committee on Finance have developed a unified framework to achieve pro-American, fiscally-responsible tax reform. This framework will deliver a 21st century tax code that is built for growth, supports middle-class families, defends our workers, protects our jobs, and puts America first. It will deliver fiscally responsible tax reform by broadening the tax base, closing loopholes and growing the
economy. It includes:

As expected, Trump’s plan includes a doubling of standard deductions with a consolidation of tax brackets and the suggestion that a new top end bracket may be created to “ensure that the reformed tax code is at least as progressive as the existing tax code and does not shift the tax burden from high-income to lower- and middle-income taxpayers.”

The framework simplifies the tax code and provides tax relief by roughly doubling the standard deduction to:

Typical families in the existing 10% bracket are expected to be better off under the framework due to the larger standard deduction, larger child tax credit and additional tax relief that will be included during the committee process.

An additional top rate may apply to the highest-income taxpayers to ensure that the reformed tax code is at least as progressive as the existing tax code and does not shift the tax burden from high-income to lower- and middle-income taxpayers.

In order to simplify the tax code, the framework eliminates most itemized deductions, but retains tax incentives for home mortgage interest and charitable contributions.

The framework limits the maximum tax rate applied to the business income of small and family owned businesses conducted as sole proprietorships, partnerships and S corporations to 25%.

The framework reduces the corporate tax rate to 20% – which is below the 22.5% average of the industrialized world. In addition, it aims to eliminate the corporate AMT, as recommended by the non-partisan JCT. The committees also may consider methods to reduce the double taxation of corporate earnings.

The framework allows businesses to immediately write off (or “expense”) the cost of new investments in depreciable assets other than structures made after September 27, 2017, for at least five years.

The deduction for net interest expense incurred by C corporations will be partially limited. The committees will consider the appropriate treatment of interest paid by non-corporate taxpayers.

The framework transforms our existing “offshoring” model to an American model. It ends the perverse incentive to keep foreign profits offshore by exempting them when they are repatriated to the United States. It will replace the existing, outdated worldwide tax system with a 100% exemption for dividends from foreign subsidiaries (in which the U.S. parent owns at least a 10% stake).

Noticeably absent in Trump’s tax plan is any mention of the treatment of “carried interest”…a hot-button topic for hedge funds and private equity managers that reap the rewards of having the majority of their income treated at “capital gains” rather than “personal income.”

Of course, the real question is whether the bill has even the slightest chance of passing both houses of Congress or if will soon meet the same fate as the failed Obamacare repeal bills.

And the initial market reaction seems to be disappointment… 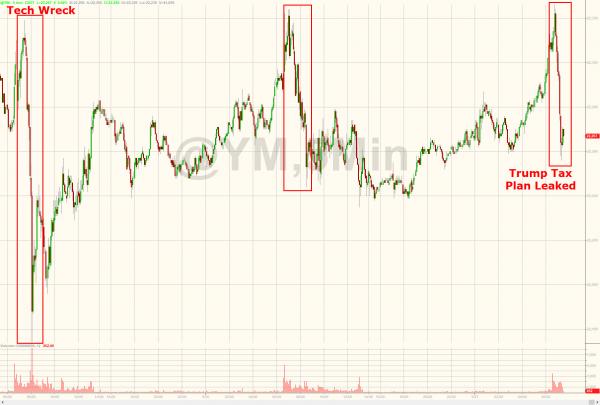 Here is the full outline:

Welcome to The Daily Wrap Up, a concise show dedicated to bringing you the most relevant independent news, as we see it, from the last 24 hours (5/14/19). As always, take the information discussed in the video below and research it for yourself, and come to your own conclusions. Anyone telling you what the truth Read More…

Welcome to The Daily Wrap Up, a concise show dedicated to bringing you the most relevant independent news, as we see it, from the last 24 hours (4/28/19). As always, take the information discussed in the video below and research it for yourself, and come to your own conclusions. Anyone telling you what the truth Read More…

Divide And Conquer: The Lies That Divide And Hide Our Common Enemy

In this technological age, information moves so quickly that by the time one story has been properly vetted — by those still choosing to uphold the all but forgotten vestiges of journalistic integrity — the masses at large have moved on to yet another unverified, anonymously sourced “bombshell” story, due to the hysterical and overhyped Read More…