The Illusion Of America: Has It Ever Really Existed?

In the past, this country has always prided itself on the personal freedom and Constitutional rights of the individual, and oddly enough, it still does today despite the fact that the US currently ranks 41st according to the 2016 world press freedom index, and 11th on the Heritage Institute’s 2016 index of economic freedom, behind countries such as Singapore, Hong Kong and Chile.

However, the facts have yet to stop the government, or rather the faction that co-opted the government, from carrying out its will and broadcasting whichever story reinforces that will. From lying about attacks and epidemics, to fabricating them all together, what this country once could have been is simply no longer present, where sadly, it truly counts: within the government, save for a brave few. But the people remain, and that American Dream still resides within their hearts and longs to be realized. Regardless of whether that dream was ever truly seen to fruition or if it was sabotaged by some of the very men who took part in its creation, it has taken root in the very foundation that holds this broken country together, it has become eternal; it prevails within the deep-seeded beliefs of that which makes this country truly powerful: its people.

Those who have participated in this fabrication are terrified that the people will once and for all see through the lie, and find the sinister reality behind. And that is indeed what we are witnessing in real-time, as Americans finally begin to wake up to this gross manipulation.

This awakening has been a long time coming, and was brought on by many different occurrences. Yet, the one event that was always meant to reinforce the citizen’s blind faith and dedication to the system, the election process, has much to the establishment’s dismay, become the largest awakening event in American history. People are being hyper-exposed to the true nature of the government and those who have complete control over its actions, thanks almost entirely to WikiLeaks and those who anonymously leaked the information.

From blaming the Russians with zero evidence, and pitting Americans against each other with race, religion and political standing, to the classic ‘lesser of two evils” ploy, the entire past election has weirdly enough turned into one of the most important things that could have happened to the individual, as it shook us all out of our complacency to see the true level of corruption operating right beneath our noses, while being told we are living the dream.

Does the Government Represent the People?

In today’s “feelings-over-facts“ climate, when a study does not embody what one chooses to embrace as “the truth,” it is simply disregarded as “fake news” or some other catch-all measure of dismissal that allows the individual to ignore contradictory information, and do so with a sense of confidence, be it a false one. Which is the case with the following study, that wildly enough has not gotten much attention since its release, as something like this would only be ignored by a willfully uninformed populace. This study actually quantifies the irrelevancy of the American public in regard to their influence on the government and its policy.

Researchers at Princeton University looked at more than 20 years worth of data to answer a pretty simple question: 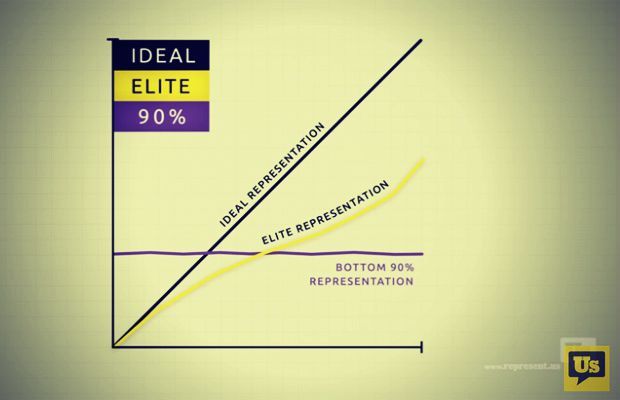 Many are beginning to come to grips with the reality that their opinion doesn’t matter in this country, and that the government truly doesn’t care what they think, and sadly… they are correct. But there’s a catch. Economic elites, business interests–those who have enough money to hire lobbyists–have an entirely different line on the graph above than the average America(the bottom 90%), and surprise surprise, it’s much closer to the ideal representation, which means these elite individuals do in fact directly influence policy in this country. So in other words, this study clearly demonstrates that money, and those who have it, dictate this country’s true direction, not the people and their faux democracy.

Ultimately, this shows that the elites have the ability to get what they what, regardless of the American majority-will, and the people pay for it, literally and figuratively. With one in every five American children born into poverty, the American people suffer the most expensive healthcare in the world, a floundering education system, and a catastrophically detrimental failure of a drug war, all spurred on with egregiously wasteful spending seemingly without end. Almost every major issue Americans face as a nation can be tied back to the realization brought on by the above graph: The average person has essentially zero influence on the passage of the very laws that affect their daily lives and the direction of their own country, which they then pay for with their hard-earned money, lest they be forced into a cage at gunpoint. Sounds like freedom to me.

Knowing that what the people really think, and who and what they vote for, quantifiably and mathematically has zero effect on the outcome(which is actually a verifiable fact thanks to this study), why do they continue to participate? This would be the point where people get angry, or call names, “conspiracy theorist,” or “un-American,” all for striking at their foundation which is unfortunately built on lies, and that shakes people; shakes them to the point where they will refuse to acknowledge the reality that contradicted their beliefs, regardless of the presented proof.

The reason that people so fervently protect their foundation of lies is that they have been conditioned to do so with the many different control measures put in place to ensure the outcome desired by those pulling the strings. The “lesser of two evils” manipulation is a ploy that has corralled and directed the voters in this country for decades, and is just one of many put in place in order to manipulate and control the American people, all while allowing them to falsely think and feel that they have an integral part in the operation and success of this country.

Every American is enlisted at a young age, and told their vote matters; that even one vote can make a difference. Yet, that entire mantra came crashing down during the past presidential election cycle when all were told that their vote would only truly matter, if and when they vote for one of two pre-approved, state-sponsored candidates; and were told this would be democracy at its finest. And intentionally manipulated polls are thrown out to convince the people that a third-party vote would indeed, not count.

Consider for a moment the claim of falsified poll data, of which there is ample proof. Knowing that the polls being broadcasted by mainstream channels are falsified in order to give the voter the impression that “the majority” is voting for a specific candidate, consider for a moment the possibility that the actual majority could in fact be voting for someone else, and most likely are, or there would be no need to falsify the polls. This is a measure taken within every election, presidential or otherwise. It is used to maintain the illusion of the majority-will being fulfilled, while in reality, it is being circumvented.

Americans then dutifully go off to cast their vote reluctantly for the “lesser-of-two-evils,” still convinced by the onslaught of propaganda telling them that the age-old adage, “Every Vote Counts” only applies when they stay within party lines. Then consider that their one vote, as misguided and manipulated as it may be, could in fact be the winning vote that steals away the presidency from a potentially more deserving, better suited and morally sound third-party option(if that even exists), and all they had to do was vote for who they truly believed in.

The point being, that one should always look inside themselves and make the choice that truly represents what they want for this country, and not just one who is ‘not as bad as the other,‘ be it in the upcoming congressional race, or the next presidential race in 2020, as each is just as important. It is also very important to point out that for one to look inward and only vote for a candidate in which they deeply believe, may in fact mean voting for no one. If there is not a viable option; if there is not a candidate that the people feel represents their will, then the most appropriate and classically American choice left on the table is to abstain from the vote. This is a practice that dates back to the Founding Fathers and it is quintessentially American, despite what those in power would have Americans believe.

Eyes to the Future

However eye-opening this past election has been, the awakening of the individual does not necessarily do much to stop this warmongering empire. Yet, we are now aware, and that has power, and the world will respond if we continue to take a stand and speak out about all that we feel no longer represents the people of this country.

So we press on and spread the word, and hold out hope that those brave few within will join us in reviving this dream still thriving within us all, and set things in motion that will revitalize this country; or some would say, create this dream we have in our hearts for the first time, and show those who would see us controlled that the false reality they thought would pacify the people has taken root, and the dream of the America we once knew, can now no longer be stifled; we will see it realized.

Most Of America Is NOT Participating In The Hysterical Rage You See On The News
October 10, 2018