Welcome to modern America, where freedom, rights and privacy are no longer an absolute, but something to be earned or withheld on a whim, and the true intentions of the government and what really goes on behind the scenes, are entirely obfuscated by intentional, manufactured political distraction.

The American people have been slowly and incrementally conditioned to accept the growing surveillance and police state, all due to some hazy fear of a verifiably manufactured danger that kills fewer people than your annual heat wave, and that is not hyperbole. According to the National Safety Council and the National Center for Health Statistics, Americans have a 1 in 45,808 chance in their lifetime of being the victim of a terrorist attack, yet this topic seemingly justifies both the domestic and foreign policy of the US(that is arguably becoming quite un-American, “the totalitarian-tip-toe”) and clearly dominates American news coverage. Whereas, in any given year, an American has a 1 in 10,785 chance of dying due to a heat wave.

“I once asked a guy at [the National Institutes of Health] how much we should spend on preventing a disease that kills 6 per year, and he looked at me like I was crazy,” John Mueller, a foreign policy expert at the Ohio State University and co-author of the book “Chasing Ghosts: The Policing of Terrorism“

The reason that self-created issues that are intrinsically harmful to the American people are essentially ignored, while being completely within our control to stop, (such as the opiate epidemic which takes the life of one American every 20 minutes and is increasing with every passing day), while others are made to be headline news when in comparison their threat is almost non-existent, is due to the differing collective agenda of the ruling class. What actually comes to pass in this country has very little to do with the collective will of the American people, and almost entirely to do with the desires of a few extremely influential individuals. This was once considered “conspiracy theory,” yet today is essentially common knowledge, along with many other topics that were once intentionally shrouded in doubt and disbelief.

The decision as to which issues get air time in this country, and therefore gather public attention, hinges entirely on the State’s ability to use said issues to control perception and further their long-term agenda. So an issue such as the opiate epidemic is intentionally ignored(at the expense of American families), subconsciously telling all those hearing about it from independent media that it is not as serious as it’s being made out to be. When in reality, it is the biggest issue facing Americans today.

Here’s how the lifetime odds of the most common — and feared — causes of death for Americans stack up against foreign killings (highlighted in red): 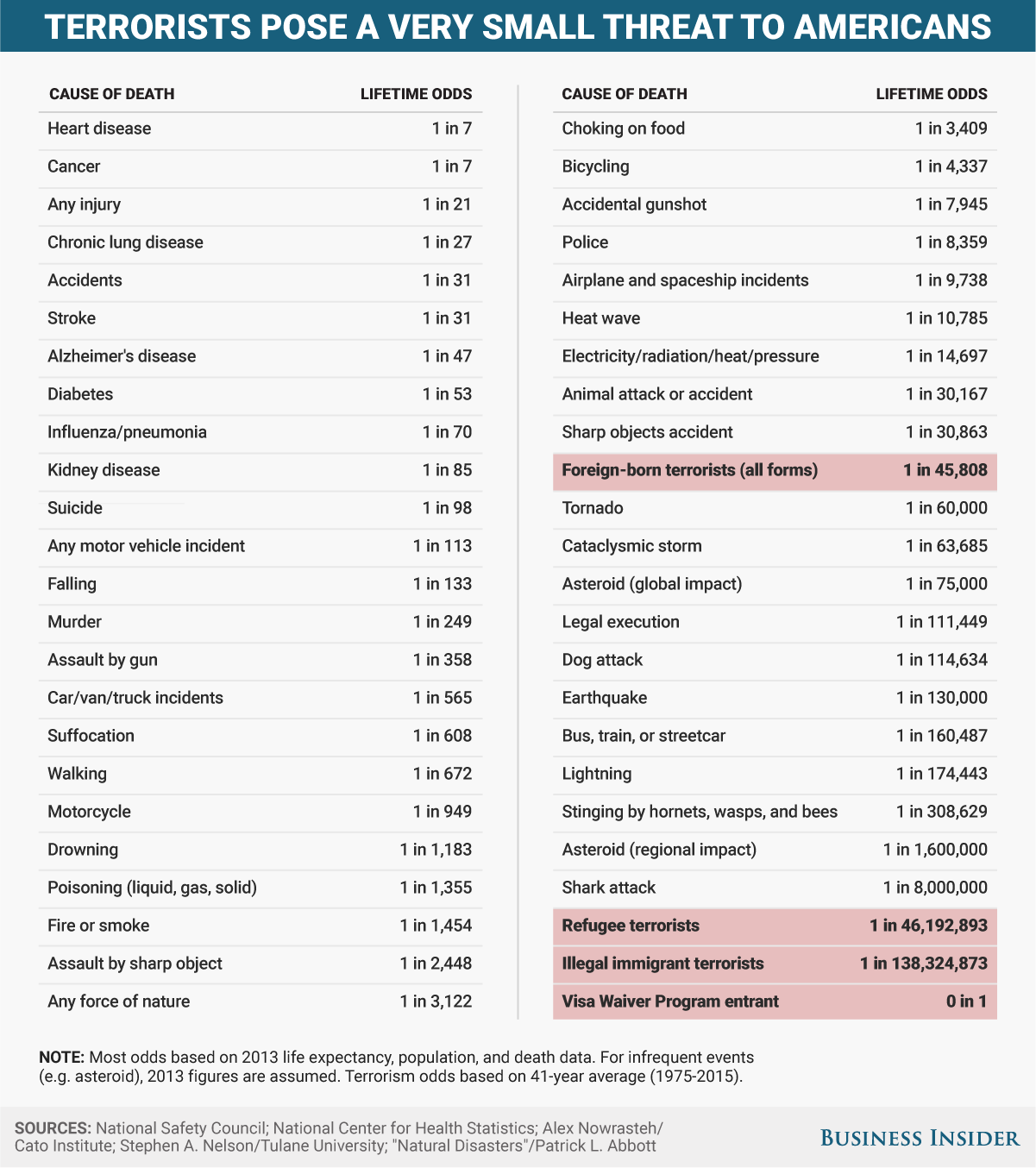 Compared to the threat posed by refugee terrorists — which the president’s executive order is allegedly designed to curtail — the data suggests the typical American is:

Interestingly enough, there is no section for drug overdose or medical mistreatment/error, which are two of the largest causes of death today. So ask yourself why neither would be listed on a compilation of the ‘top causes of death?’ That in and of itself, speaks volumes.

It would seem that the debacle that was the 2016 selection, has allowed the people to see past the veil, exposing the true nature of politics. Which is why many feel that there is a concerted effort underway to bring all those exposed to this truth, back into the comforting suffocation of the government fold, using all the many varied tactics at their disposal.

The sad reality is that the State only feigns concern for its citizens when it serves a purpose. The real issues, such as the massive opiate addiction problem in the US, are ignored due to the political influence and control of the pharmaceutical companies, as well as the failure of the government institutions meant to be regulating these companies. All while other more benign and inconsequential issues are trumped-up and cast as the gravest issues of today.

This is one of many ways that the American people are being distracted from the real problems facing this nation. But even if Americans were able to maintain focus on the important issues, this past election was so disruptive to “politics as usual” that politicians in this country are now in complete damage control; meaning they have forgone attempting to maintain the illusion that they are here for us, in order to wage all-out war against Donald Trump, or respectively, those trying to stop him.

The American political arena has been completely derailed and distracted today by what one could call “Tit-for-Tat” politics. Each side(as if there should only be two sides) is completely consumed with the other. The Left is entirely immersed in everything Donald Trump, seeking anything that can be used to further their party’s political future; and this comes at the cost of all the current issues that are being ignored for selfish and ambitious reasons. The Right, is completely consumed with the seemingly treasonous and destabilizing actions of the Left. Both these concerns are worthy of some time, however, what is currently taking place is the veritable suspension of effective government(if there is such a thing) in order to stifle, hinder and outright stop their political opponents, all in the best interest of the country of course (and by “country” they mean themselves, and by “best interest” they mean their interests).

Yet, in many ways, this is also an effective distraction from issues of dire importance. As all of humanity shares a morbid fascination with disaster, many can hardly look away as we grow ever-closer to destruction while continuing to scream of our greatness. Ask yourself what it is that we are being distracted from? Or for what purpose?

As bad of a situation as this currently is for the American people, there is some light on the horizon. This is no doubt a very disheartening and revealing time, yet the truth is now laid bare for all those willing to look, and the first step in solving any problem is admitting you have one. Now that we can see where the problem lies, change can begin, but it must begin with us; with you.

Are We All Hypocrites: Confronting The Reality Of Social Norms
March 14, 2017