The last few days have been truly amazing. I didn’t even write an article yesterday; I’ve just been staring transfixed by my social media feeds watching liberal Americans completely lose their minds. I can’t look away. It’s like watching a slow motion train wreck, and everyone on the train is being really homophobic.

I’ve been writing about Russiagate since it started, and I can honestly say this is the worst it’s ever been, by far. The most hysterical, the most shrill, the most emotional, the most cartoonishly over-the-top and hyperbolic. The fact that Trump met with Putin in private and then publicly expressed doubt about the establishment Russia narrative has sent some political factions of America into an emotional state that is indistinguishable from what you’d expect if Russia had bombed New York City. This despite the fact that the establishment Russia narrative consists of no actual, visible events whatsoever. It is made of pure narrative.

I don’t think the US media has ever been nuttier than they are right now. It would be comical if it wasn’t so dangerous. They are harming the national psyche in a profound way

I don’t even know where to start. Everyone has been completely mad across the entire spectrum of what passes for America’s political “left” today, from the usual suspects like Chuck Schumer and Nancy Pelosi and their indistinguishable Never-Trump Republican allies, all the way to supposedly progressive commentators like Cenk Uygur and Shaun King. Comparing this pure narrative non-event to Pearl Harbor is now commonplace and mainstream. I just watched a United States Senator named Richard Blumenthal stare right into the camera refer to the hypothetical possibility of future Russian cyber intrusions as “this 9/11 moment.”

“We are in a 9/11 national emergency because our country is under attack, literally,” Blumenthal told CNN while demanding a record of Trump’s meeting with Putin at the Helsinki summit. “That attack is ongoing and pervasive, verified by objective and verifiable evidence. Those words are, again, from the director of National Security. And this 9/11 moment demands that we do come together.”

Nothing about the establishment Russia narrative is in any way verifiable, and the only thing it has in common with 9/11 is the media coverage and widespread emotional response.

September 11 had actual video footage of falling towers. You could go visit New York City, look at the spot where those towers used to be, and see them not being there anymore. You could learn the names of the people who died and visit their graves and talk to their family members. Exactly how it happened is a matter of some debate in many circles, but there is no question that it happened. There was an actual event that did happen in the real world, completely independent of any stories people tell about that event.

This is what I’m talking about when I say that whoever controls the narrative controls the world. Whoever controls the stories that westerners are telling each other has the power to advance concrete agendas which reshape global geopolitics without any actual thing even happening. Simply by getting a few hand-picked intelligence agents to say something happened in a relatively confident way, you can get the entire media and political body advancing that narrative as unquestionable fact, and from there advance sanctions, new military operations, a far more aggressive Nuclear Posture Review, the casting out of diplomats, the arming of Ukraine, and ultimately shove Russia further and further off the world stage.

As we discussed last time, the current administration has actually been far more aggressive against Russia than the previous administration was, and has worked against Russian interests to a far greater extent. If they wanted to, the international alliance of plutocrats and intelligence/defense agencies could just as easily use their near-total control of the narrative to advance the story that Trump is a dangerous Russia hawk who is imperiling the entire world by inflicting insane escalations against a nuclear superpower. They could elicit the exact same panicked emotional response that they are eliciting right now using the exact same media and the exact same factual situation. They wouldn’t have to change a single thing except where they place their emphasis in telling the story. The known facts would all remain exactly as they are; all that would have to change is the narrative.

Public support for Russiagate depends on the fact that most people don’t recognize how pervasively their day-to-day experience is dominated by narrative. If you are intellectually honest with yourself, you will acknowledge that you think about Russia a lot more now than you did in 2015. Russia hasn’t changed any since 2015; all that has changed is the narrative that is being told about it. And yet now the mass media and a huge chunk of rank-and-file America now view it as a major threat and think about it constantly. All they had to do was talk about Russia constantly in a fearful and urgent way, and now US liberals are convinced that Vladimir Putin is an omnipotent world-dominating supervillain who has infiltrated the highest levels of the US government. 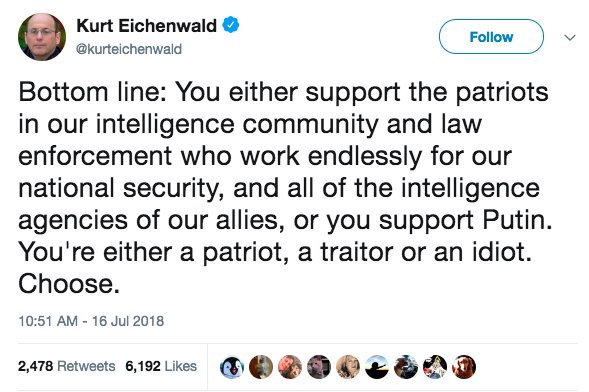 If humanity is to pull up and away from its current path toward either ecological disaster, nuclear armageddon or Orwellian dystopia, we are necessarily going to have to change our relationship with narrative. As long as the way we think, vote and organize can be controlled by the mere verbiage of the servants of power, our species will never be able to begin operating in a sane and wholesome way. If all it takes to make us act against our own interest is a few establishment lackeys speaking a few words in a confident tone of voice, if mere authoritative language can hypnotize us like a sorcerer casting spells, we are doomed to slavery and destruction.

So stop staring transfixed by the narratives, and begin looking at the behavior and motives of the people advancing them instead. Stop staring at the movie screen they’re constantly drawing your attention to, turn around in your theater seat, and look at the people who are running the projector. The way out of this mess is to begin ignoring the stories we’re being hypnotized with and start critically examining the people who are conducting the hypnosis. Ignore the stories and stare with piercing eyes at the storytellers. The difference between the official narrative and the actual reality of this world is the difference between fiction and fact. Evolve beyond.

The devastating hack on SolarWinds was quickly pinned on Russia by US intelligence. A more likely culprit, Samanage, a company whose software was integrated into SolarWinds’ software just as the “back door” was inserted, is deeply tied to Israeli intelligence and intelligence-linked families such as the Maxwells. In mid-December of 2020, a massive hack compromised Read More…

If the election fraud narrative, cyberattack and rigged voting machines haven’t yet thoroughly confused the American voting public, maybe the latest report from Reuters will do the job. According to Reuters, U.S. voting authorities are now warning that while the Russians may not actually hack the Presidential election, they may fake hacking the Presidential election. Read More…

‘It is our constitutional duty as members of Congress to place a check on the executive branch in matters of war and peace.’ In response to the Pentagon’s deployment of about 400 American ground troops to Syria, U.S. Rep. Barbara Lee (D-Calif.) is introducing a bill Friday that would block the Defense Department from putting any more Read More…