MSNBC’s Chris Hayes recently asked a question of his Twitter following that was so heavily loaded it wouldn’t be permitted on most interstate highways: “Aside from genuine cranks, is there anyone left denying it was the Russians that committed criminal sabotage in the American election?”

Hayes asked this fake question because he works for MSNBC and it is therefore his job, and he asked it in response to a report first made viral by deranged espionage LARPer Eric Garland that a Dutch intelligence agency had been observing Russian hackers attacking US political parties in advance of the 2016 election. Like all “bombshell” Russiagate reports, this one roared through social media like wildfire carried on the wings of liberal hysteria about the current administration, only to be exposed as being riddled with gaping plot holes as documented here by independent journalist Suzie Dawson. The report revolves around an allegedly Russian cyber threat now known in the west as “Cozy Bear”, which as Real News’ Max Blumenthal notes is not a network of hackers but “a Russian-sounding name the for-profit firm Crowdstrike assigned to an APT to market its findings to gullible reporters desperate for Russiagate scoops.”

This “bombshell” overlapped with another as it was reported by the New York Times that at one point many months ago Trump had wanted to fire Robert Mueller, but then didn’t.

Why does this keep happening? Why does the public keep getting sold a mountain of suspicion with zero substance? Over and over and over again these “bombshell” stories come out about Trump and Russia, Russia and Trump, only to be debunked, retracted, or erased from the spotlight after people start actually reading the allegations and thinking critically about them and see they’re not the shocking bombshells they purport to be? These allegations are all premised upon claims made the US intelligence community, which has an extensive and well-documented history of lying to advance its agendas, as well as porous claims made by an extremely shady and insanely profitable private cyber security company, and yet all we’re ever shown is smoke and mirrors with no actual fire.

You can begin finding your way toward the answer to that question by envisioning the following hypothetical scenario. Imagine what would happen if, instead of promoting the Russiagate narrative, the faces of the consent-manufacturing machine known as the mass media began telling mainstream America that in order to ensure that the US will remain capable of dominating the other countries on this planet, there’s going to have to be an aggressive campaign to re-inflame the Cold War with the goal of disrupting and undermining China and its allies.

That would be a very different narrative with a very different effect, wouldn’t it? But that’s exactly what’s going on here, and if the US power establishment and its propaganda machine were in the business of telling people the truth, that’s precisely what they’d say.

It’s not a secret that China has been working to surpass the United States as the world’s leading superpower as quickly as possible. Hell, Xi Jinping flat-out said so during a three and a half hour address last October, and many experts think it might happen a lot sooner than Xi’s 30-year deadline. An editorial from China’s state press agency about the Davos World Economic Forum asserts that the time has come for the world to choose between the “Xi-style collaborative approach” and Trump’s “self-centered America First policy (which) has led his country away from multiple multilateral pacts and infused anxiety into both allies and the broader world.” China has been collaborating with Russia to end the hegemony of the US dollar, to shore up control of the Arctic as new resources become available, and just generally build up its own power and influence instead of working to remain in Washington’s good graces as most western nations have chosen to do.

Preventing this is the single most important goal of the US power establishment, not just its elected government but the unelected plutocrats, defense and intelligence agencies which control the nation’s affairs behind the scenes. This agenda is so important that in a letter to his successor the outgoing President Barack Obama made the “indispensable” nature of American planetary leadership his sole concrete piece of advice, and pro-establishment influence firms like Project for a New American Century have made preventing the rise of a rival superpower their stated primary goal. 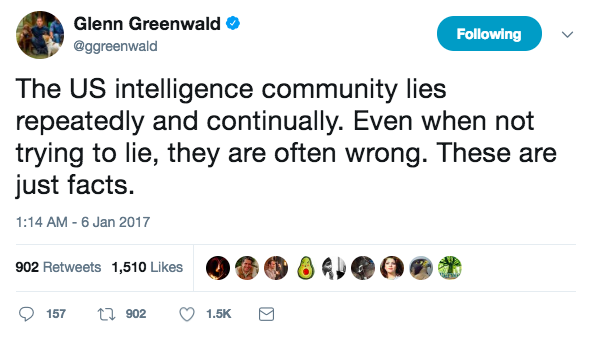 This is what Russiagate is ultimately about. Democrats think it’s about impeaching Trump and protecting the world from a nigh-omnipotent supervillain in Vladimir Putin, Trump’s supporters think it’s a “deep state coup” to try and oust their president, but in reality this has nothing to do with Trump, and ultimately not a whole lot to do with Russia either. When all is said and done, Russiagate is about China.

In an essay titled “Russia-China Tandem Changes the World,” US-Russia relations analyst Gilbert Doctorow explains how the surging economic power China depends upon Russia’s willingness to go head-to-head with America and its extensive experience with US attempts to undermine the USSR during the Cold War. Alone both nations are very vulnerable, but together their strengths are complimentary in a way that poses a direct threat to America’s self-appointed role as world leader.

“Russia is essential to China because of Moscow’s long experience managing global relations going back to the period of the Cold War and because of its willingness and ability today to stand up directly to the American hegemon,” writes Doctorow, “whereas China, with its heavy dependence on its vast exports to the U.S., cannot do so without endangering vital interests. Moreover, since the Western establishment sees China as the long-term challenge to its supremacy, it is best for Beijing to exercise its influence through another power, which today is Russia.”

So the strategic value of taking Russia out of the equation is clear, and that’s exactly what the US power establishment is attempting to do. California Representative Eric Swalwell, one of the lead congressional promoters of both anti-Russia sentiment and the Trump-Russia “collusion” narrative, admitted last year that he’d like to see tougher sanctions stacked up until they “isolate Russia from the rest of the world” after much badgering from Fox’s Tucker Carlson about his incendiary claims that the alleged cyberattacks constituted an “act of war.” It is worth noting here that despite Swalwell’s repeated hysterical claims about Trump and Russia, he recently voted to renew the treasonous Kremlin-colluding president’s godlike surveillance powers anyway.

Establishment muppets like Swalwell and the unelected elites who own them don’t care about Trump, they care about crippling China’s right arm Russia so that they can set about sabotaging the agendas of a potential rival superpower unimpeded by the skillful opposition of a nuclear superpower. But, getting back to the hypothetical situation I asked you to envision earlier, they can’t just come right out and say that.

They can’t. The US oligarchs, the oligarch-owned media outlets, and the oligarch-aligned intelligence/defense agencies can’t just come right out and say “Hey America, we need to ensure our power structures remain unrivaled for the foreseeable future, so we’re going to have to try and shut down Russia’s influence using ever-tightening economic sanctions, NATO expansionism, proxy wars and troops along Russia’s border to squeeze them until they lose the capacity to interfere with our ability to crush China. We’ll also need a vastly inflated military budget to help facilitate our geopolitical agendas and prepare for a possible world war, please.” A few Americans might consent to it, but by and large the US public would rather see those resources spent on making their lives better.

Just as importantly, the rest of the world would recoil in revulsion.

So they lie. They use America’s deliberately constructed partisan enmity and culture wars to fan the flames of mass hysteria about a new president so that enough Americans will permit continuous escalations with Russia under the mistaken impression that they are helping to resist Trump. They think they’re lying to you for your own good, because you can’t understand how important it is that they do what they’re trying to do. That’s why there are so many gaping plot holes and none of this ever quite adds up; they’re lying to you like a parent telling a child he needs to eat his broccoli if he doesn’t want a lump of coal for Christmas. Except instead of eating broccoli it’s consenting to dangerous escalations and military expansionism, and instead of a parent it’s a class of elitist sociopaths, and you’re always going to get coal.

And sure, an argument can be made that the world is better off under the watchful domination of the US power establishment than it would be with multipolar power arrangements, and I encounter many establishment loyalists who make precisely that argument. Personally I would argue that the death, destruction and mayhem caused by the intrinsically evil things the US establishment must do in order to maintain dominance completely invalidate that argument, but it’s a debate that people deserve to have, and they can’t have it when they’re being lied to about what’s really going on.

Insist on the truth. Keep pushing back against this pernicious psyop. Spread the word.

As Iran Dumps Dollar, Congress Quietly Slips in Bill for ‘Use of Force Against Iran’

On March 21, The Islamic Republic of Iran will cease using the U.S. dollar in all of its financial reporting. The decision to stop using the dollar as a reference has been in the works for some time but was expedited after the Trump administration decided to include Iran as one of the seven countries banned Read More…

For two consecutive nights, Israeli airstrikes pounded Syria unprovoked and even coincided with attacks from Syria’s al-Qaeda offshoot on one of the days. The only story which received adequate coverage, in between however, was rocket fire from Lebanon, demonstrating a clear media double standard. This Tuesday night, Israeli fighter jets struck the Aleppo countryside area Read More…

As he vows to put an end to the opioid epidemic by boosting law enforcement and upping spending on border security, President Donald Trump has, once again, done nothing but mimic his predecessors when it comes to drug policy. Like Barack Obama or George W. Bush before him, he believes government has the answer to Read More…