Remember when WHO officials said the particles of radioactive fallout making their way to the United States following the 2011 disaster at the Fukushima nuclear power plant in Japan were no big deal?

Following the 2011 disaster at the Fukushima nuclear power plant in Japan – which left Japanese residents contending with toxic water and radioactive wild boars, World Health Organization (WHO) officials said that particles of radioactive fallout which made its way to the Western United States and elsewhere was no biggie and didn’t pose a health risk. 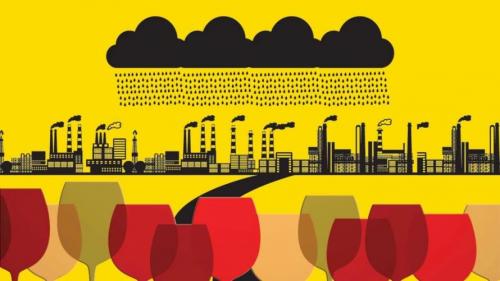 California wine lovers will get to test that theory, after researchers at the French National Center for Scientific Research (CNRS) discovered cesium-137 in several golden-state vintages. The researchers tested 18 bottles of California rosé and cabernet sauvignon from 2009 onward – finding increased levels of the radioactive isotope in bottles produced after the Fukushima disaster. The cabernets had double the radiation of the other wine, according to the study.

“We can measure some radioactive level that is much higher than the usual level,” said Michael Pravikoff, a physicist at a French research center who worked on the study.

The French research team has in recent years examined wines from around the world, trying to correlate the level of radioactive material with the date the wine grapes were picked.

While ingesting cesium-137 elevates one’s risk of cancer, the radioactive particles found in California wine “are not seen as a health hazard” according to Pravikoff, who said: “These levels are so low, way below the natural radioactivity that’s everywhere in the world.”

The California Department of Public Health said Friday that it had not previously heard of the study, but that there were no “health and safety concerns to California residents.”

“This report does not change that,” a department spokesman, Corey Egel, said in an emailed statement.

Mr. Pravikoff said the California bottles had radioactive levels so low that the researchers had to use a special technique to measure them: burning the wine to ashes.

In other cases, where radiation is higher, the team’s equipment can measure the radiation through the glass of the wine bottle, so the bottle does not have to be opened.” –NYT

Related Reading: Monsanto’s Glyphosate Found In All Wines Tested In Napa Valley, Even The Organic Ones

In 2016, AP reported that “Radiation from Japan’s Fukushima nuclear disaster detected on Oregon shores,” however officials claimed that the samples from Tillamook Bay and Gold Beach were “at extremely low levels not harmful to humans.”

That said, as Whitney Webb of TrueActivist noted at the time, Even if we can’t see the radiation itself, some parts of North America’s western coast have been feeling the effects for years. Not long after Fukushima, fish in Canada began bleeding from their gills, mouths, and eyeballs. This “disease” has been ignored by the government and has decimated native fish populations, including the North Pacific herring. Elsewhere in Western Canada, independent scientists have measured a 300% increase in the level of radiation. According to them, the amount of radiation in the Pacific Ocean is increasing every year. Why is this being ignored by the mainstream media? It might have something to do with the fact that the US and Canadian governments have banned their citizens from talking about Fukushima so “people don’t panic.”

Also in 2016, Japanese officials admitted there was a cover-up, and there was a concerted effort to downplay the significance of the reactor meltdowns.

Multiple reactors at Japan’s Fukushima nuclear power plant melted down after a 50-foot tsunami wave crashed through barriers and knocked out the reactors’ backup generators. The disaster spewed radioactive fallout into the air and water – sickening the crew of the nearby USS Ronald Reagan as they provided support.

And while the sailors were undoubtedly exposed to concentrated doses of radioactive isotopes that are nowhere near the levels which have been found along the West Coast – and now in California wine, it is premature – and perhaps highly irresponsible, for officials to claim that such small doses will have no effect, as radiation exposure is cumulative and the Fukushima disaster was an unprecedented event due to its massive release of radioactivity into the Pacific Ocean.

Is The Government Coming For Your Retirement Funds?

For most, the thought of having one’s retirement account wiped out is almost nightmarish, to put it bluntly. The reason should be quite obvious; what rational human being would want to accumulate their hard-earned savings over several decades of labor, to then one day find out that all the money saved up from this labor is now gone? For Read More…

A now-notorious list of ostensibly “fake” news sites — created by a liberal professor, seemingly out of thin air — spread like wildfire online in the past two days and was eagerly reprinted by corporate media presstitutes hoping to vindicate their own failed reporting on the 2016 election. But branding perfectly legitimate outlets with the Read More…

Welcome to The Daily Wrap Up, a concise show dedicated to bringing you the most relevant independent news, as we see it, from the last 24 hours (8/20/18). As always, take the information discussed in the video below and research it for yourself, and come to your own conclusions. Anyone telling you what the truth Read More…